iRacing’s newest off-road series for professional sim racers kicks off on Wednesday night, as 24 of the world’s fastest virtual short course drivers take on the Pro 4 for an eight-week, 16-race championship. The inaugural iRacing Off-Road Championship Series will begin streaming at 8:30PM ET at iRacing.com/live with the return of the ever-popular All-Star series, while the pros will do battle for their share of a $25,000 prize beginning at 9.

All four of iRacing’s short course tracks will play host to two events, and each event will see double features with equal points on the line. Each feature also runs to real-world lap counts and includes an inversion at the front of the field, putting the series as close as it gets to running in any of America’s real-world short course series. The full event schedule is as follows:

While this is the first time that short course off-road racing has had an iRacing pro series, most of the competitors involved are used to running at a high level. Names like Tommi Hallman, Josh Fox, and Jakob Rafoss—to name just a few—were iRacing Rallycross pros in past seasons, while Alex Bergeron, Felix Roy, and Brandyn Proudfoot cross over from the iRacing World of Outlaws ranks. Many of the other drivers on the list have run in Jim Beaver eSports’ eShort Course events on iRacing that have aired on the CBS Sports Network, including Connor Barry, Josh Edmundson, and Cam Pedersen, the top three in the 2022 World Cup.

Joining the sim racing pros will be an eclectic mix of All-Star racers from real-world off-road racing, pros from other major racing series, and popular Twitch streamers. This roster won’t stick with just the Pro 4, though; they’ll also be challenged by the Pro 2 Lite and Volkswagen Beetle Lite, the same two vehicles that all iRacers start with when beginning their ascent up the Dirt Road ladder. 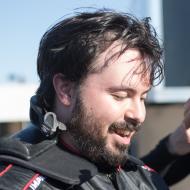