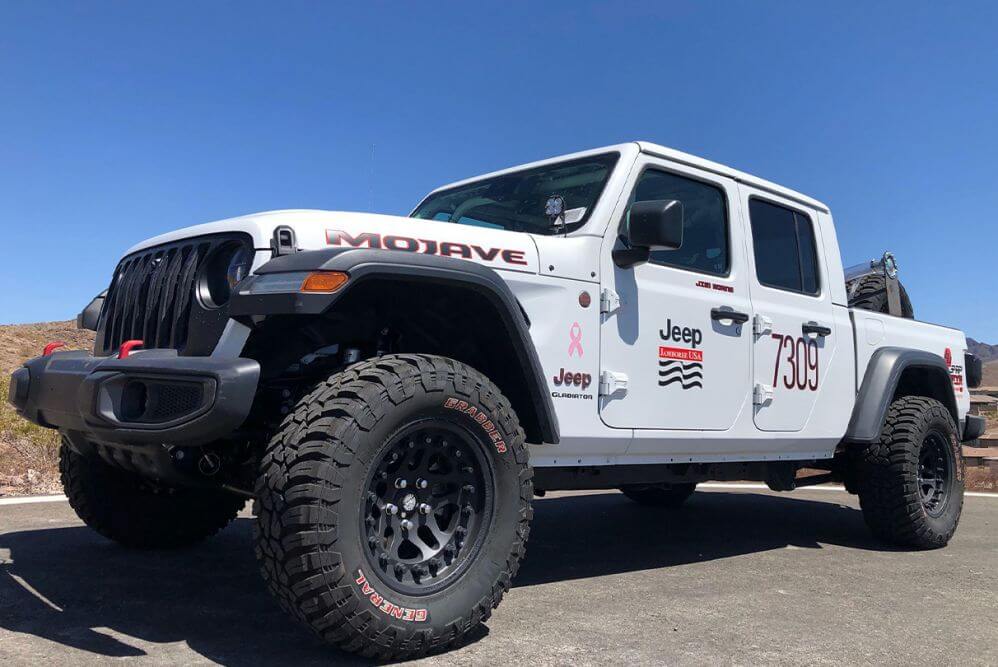 Earlier in the year a bone stock 2020 Jeep Mojave Gladiator rolled into Rusty’s Off-Road in Rainbow City, Alabama. Driven by Jim Horne, and his wife Barb, a breast cancer survivor.  The goal was to battle The Maxxis Tires Casey Folks Best in the Desert Vegas to Reno Off-Road Race. The race consists of 550 miles through the grueling Nevada desert, and is considered BITD’s crown jewel of races. With some race modifications the one of a kind vehicle will be piloted by Jim, co-piloted by Barb, with Tony and Rusty Megois listed as back up pilot and co-pilot if needed.  Barb has already shown she has the fighting spirit, so battling the desert should be a breeze, right? Let’s talk a bit about the truck.

The Jeep has entered the “Production Class”, so no major changes will be permitted other than safety. It is powered by a automatic V6 engine, with full 4-wheel drive capabilities, because it’s a Jeep of course. It is actually considered to be Jeeps answer to the hugely popular Ford Raptor.  The Mojave Gladiator comes with a slightly thicker frame, wider track, and Fox Shocks front and rear.

The first order of business was to completely strip the vehicle down to bare bones. The interior was outfitted with a full race certified cage ,which was designed and fabricated by the crew at Rusty’s.  PRP race seats with custom mounting brackets were then added.

The stock 22 gallon fuel tank was among the next huge changes, mainly for safety reasons, but 22 gallons just wasn’t going to cut it for a race of this size.  It was replaced with a brand new 35 gallon fuel cell mounted safely into the bed of the truck.  Safety measures aside, the 13 extra gallons of fuel is sure nice to have.  Also in the bed, an ARB jack mount was added and the crew designed and fabricated a fully custom dual tire mount, which also acted as the rear bumper. Baja Designs came aboard this amazing build to outfit their lighting needs as well.

The custom roll cage, and all other fabricated parts were soon painted to match the original stock white, giving it that clean smooth look. The truck was then outfitted with some fresh new shoes, a set of 35” General Tires were mounted on Hutchinson Rock Monster Wheels. The entire build and fabrication was overseen by Tony Megois, of Rusty’s.

Once the truck was complete, it was time to shake it down. Jim drove it from Rainbow City, Alabama back to Las Vegas for the complete shakedown.  He then drove to Jeep Jamboree headquarters in Georgetown, CA.  Other than having to swap out a simple fuel filter, the testing process went flawlessly.

Barb has been an absolute warrior, and to complete the V2R race with her husband Jim, would be a mighty check off her bucket list.  They hope to complete the race on their own, but as mentioned there are backup drivers registered just in case. The crew at Rusty’s Off-Road will be traveling across the country to lend any and all support needed, but most of all to be witness to something so special and close to all their hearts.

Go get ‘em Jim and Barb – Enjoy every moment of it!