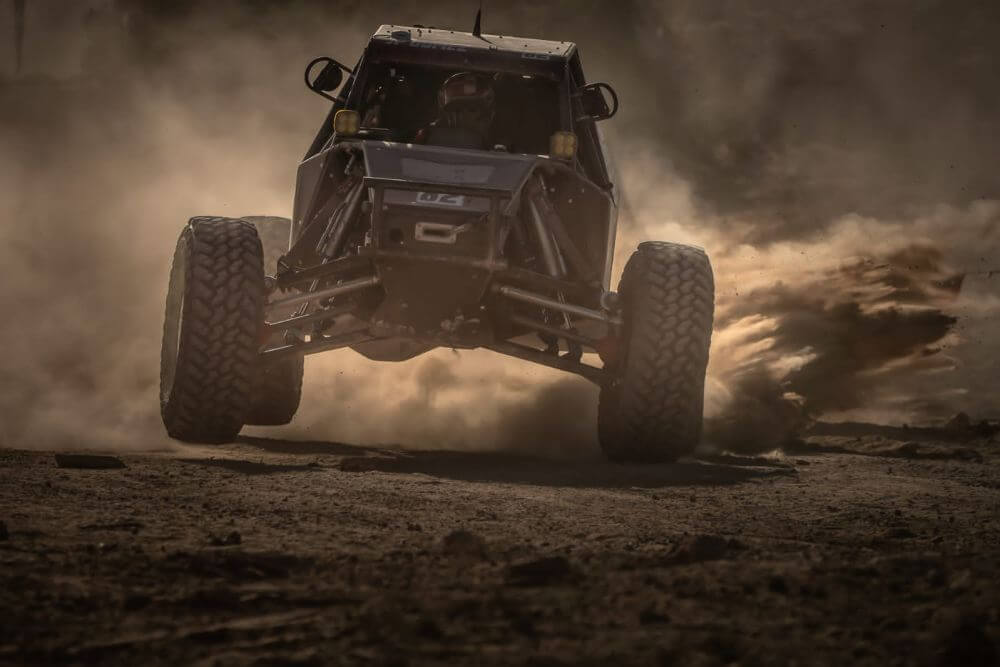 April 6, 2021 (Moab, UT)- Moab, Utah, has a reputation as being a destination for outdoor enthusiasts of all types, with private park Area BFE having some of the most challenging trails in the area. Racers from all across the US met April 2 and 3rd for the 2nd running of the aptly titled “King Shocks Area BFE Beatdown”, the season opener for the 2021 ULTRA4 West regional championship. The course consisted of 6 miles of elevation changes, tight canyons, rocky hill climbs, tight turns, ledges, and sharp rocks.  The weather could not have been more perfect with blue skies, red rock, and white snow still on the mountains in the distance. The 4400 Unlimited class raced 8 laps, the 4500 and 4800 classes each raced 5 laps, while the 4900 UTV class did 4 and the 4600 Stock class raced 3. The race truly lived up to its namesake and beat down the drivers in all classes as they challenged themselves, each other, and the course.

ULTRA4 Racing is known for vehicles that can race multiple types of terrain with power and authority. The “Swiss Army Knife” of off-road racing, this course challenged the rock racing side of things. The initial qualifying lap introduced drivers to all the aspects of this course in a frenzy of activity and immediately tested their cars and their skill. Quick off the line, hairpin turns, quick back stretch, then brutal rock section, into another hairpin and out. All classes ran the qualifying course to determine starting order. Some were fast, others created more work for themselves by pushing the car too hard during qualifying and spending the night wrenching to get ready for the next day’s racing action. 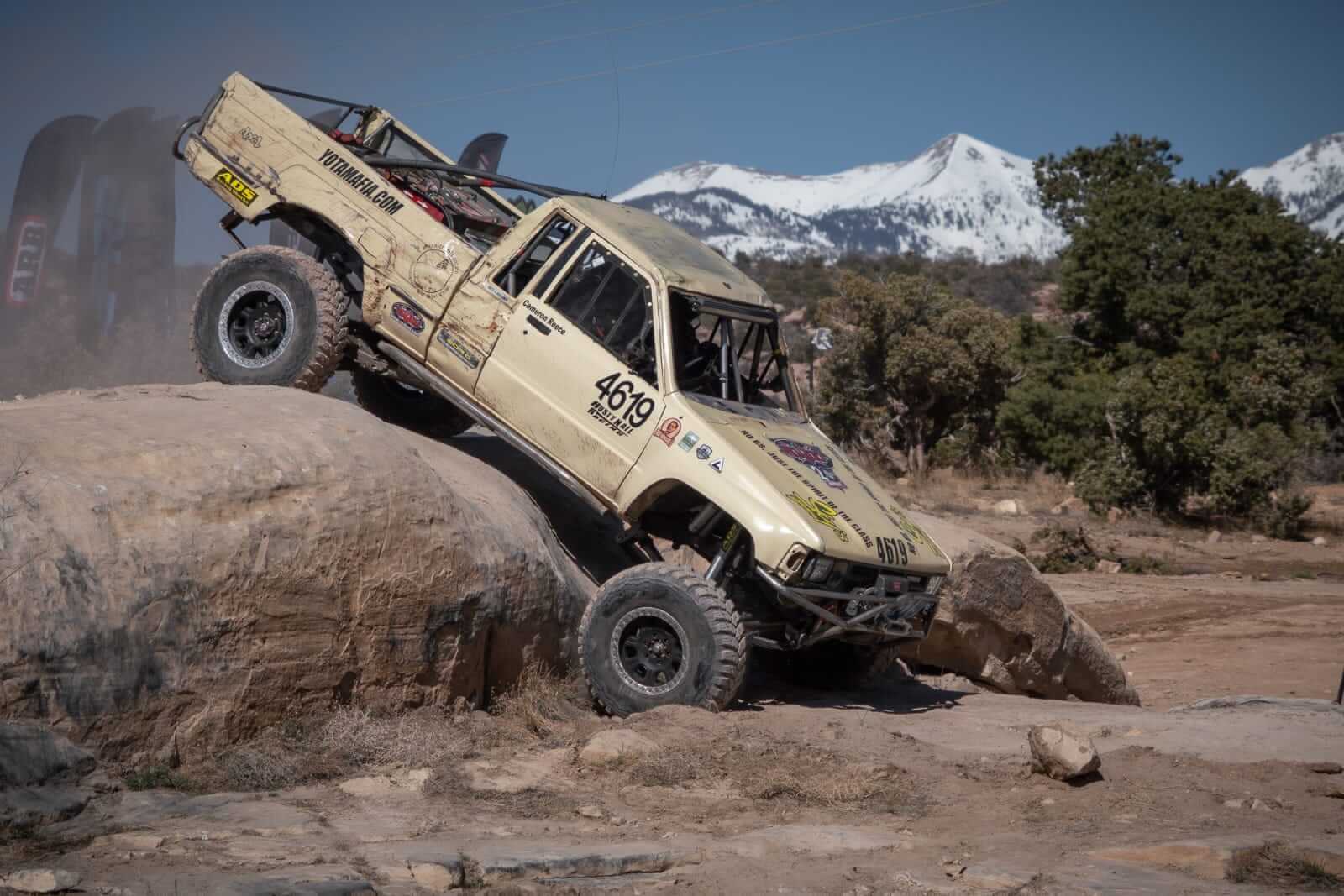 Taking the pole in the Spidertrax 4600 Stock class was Sean McNamara, followed by Albert Contreras and Josh Atteberry. Over a dozen stock class cars (one complete with a roof top tent!) entered the field to test themselves, their crew, and their cars. The Can-Am 4900 UTV class pole was taken by Josh Smith, followed by Scott LeSage, and Trey McKinlay. Experienced Yukon Gear and Axle 4500 Modified class driver Dan Fresh took the pole, along with Rick Lavezzo and John Mathews close behind. Branik Motorsports 4800 Legends class driver Cody Young earned the extra 7 points for taking the pole, followed by Logan Goodall and Brent Harrell. Taking his FIRST pole in the 4400 Unlimited class was raising star Bailey Cole, edging out Dan Wyrick and Cody Addington for the honor and the bonus points.

Race day started with a stunning sunrise and the sound of race cars waking up. First off the line was the Spidertrax 4600 Stock Class, waking up the rest of the valley with their enthusiasm and sportsmanship. The Stock class is one of the tightest classes of competitors, both as friends and in vehicle capabilities. The day was filled with back-and-forth racing, flips, recoveries, and skilled driving. Stock class vehicles are limited to 35” DOT approved tires and one shock per corner, so it’s the closest to racing in your trail rig that you will find in ULTRA4. When the dust had settled, legendary Justin Reece (your 2021 Every Man Challenge 4600 class winner) once again stood proud at the top of the podium, driving his 30+ year old leaf spring Toyota pickup. Sean McNamara finished second and the podium was rounded out by Twitchy McGee. 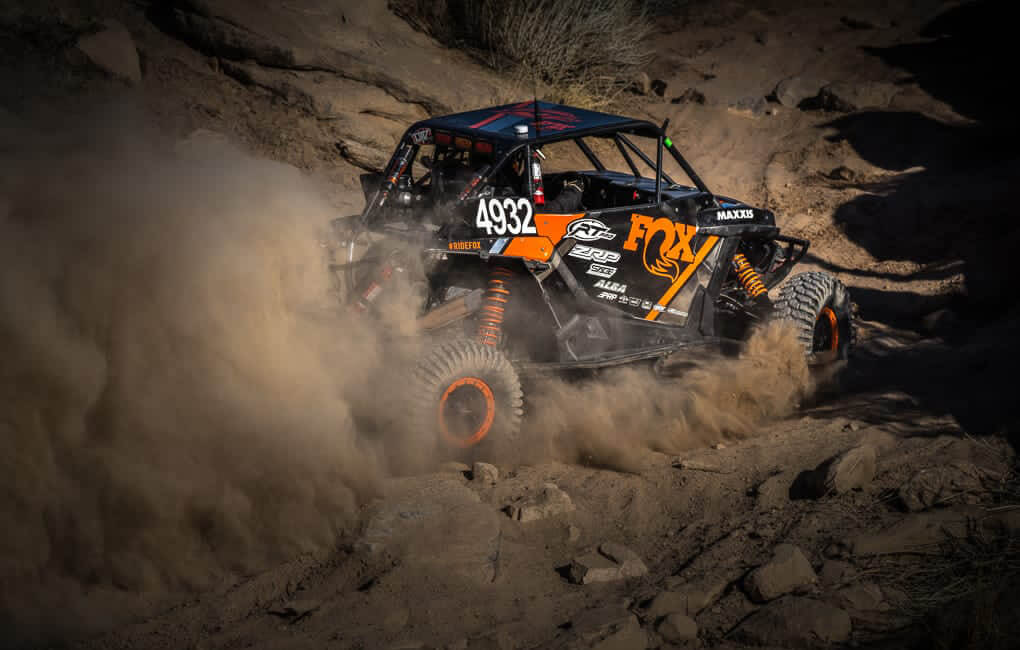 Next up was the fastest growing class in ULTRA4 Racing, the Can-Am 4900 UTV class. Competition is fierce within this group, with a mix of skilled professional drivers and first-time racers getting involved in the sport. ULTRA4 offers a “First Round on Us” promotion that waives the entry fees for first time drivers. Often the 4900 UTV class is the entry point to test the waters. Racing consisted of drivers who pushed too hard in qualifying and taking a spill rocketing to the front of the pack within the first lap mixed with those working out their plan. Intense, edgy, and with vehicles well adapted to this terrain, the victory went to birthday boy Mark Welch, earning his first ULTRA4 Racing victory. Always ultra-competitive Jacob Versey was second, and Josh Smith finished 3rd.

The Yukon Gear and Axle 4500 Modified Class, along with the Branik Motorsports 4800 Legends class took the field of battle together, with starting order based upon their qualifying times as a group. While the classes were mixed to start, each class was only racing against itself for finishing position. The race format was a total time format, so drivers starting in the front had a clean air advantage, but all drivers were scored on corrected time. The 4800 Legends class was a mix of retired 4400 class cars and newly built Legends class cars. 1 shock per corner, 37” DOT approved tires, and front mount engines create a growing class where experienced cars can continue to live. The 4500 Modified class is similar in being tied to 37” DOT tires, but is allowed 2 shocks per corner, but with more restrictive frame and body rules than Legends. 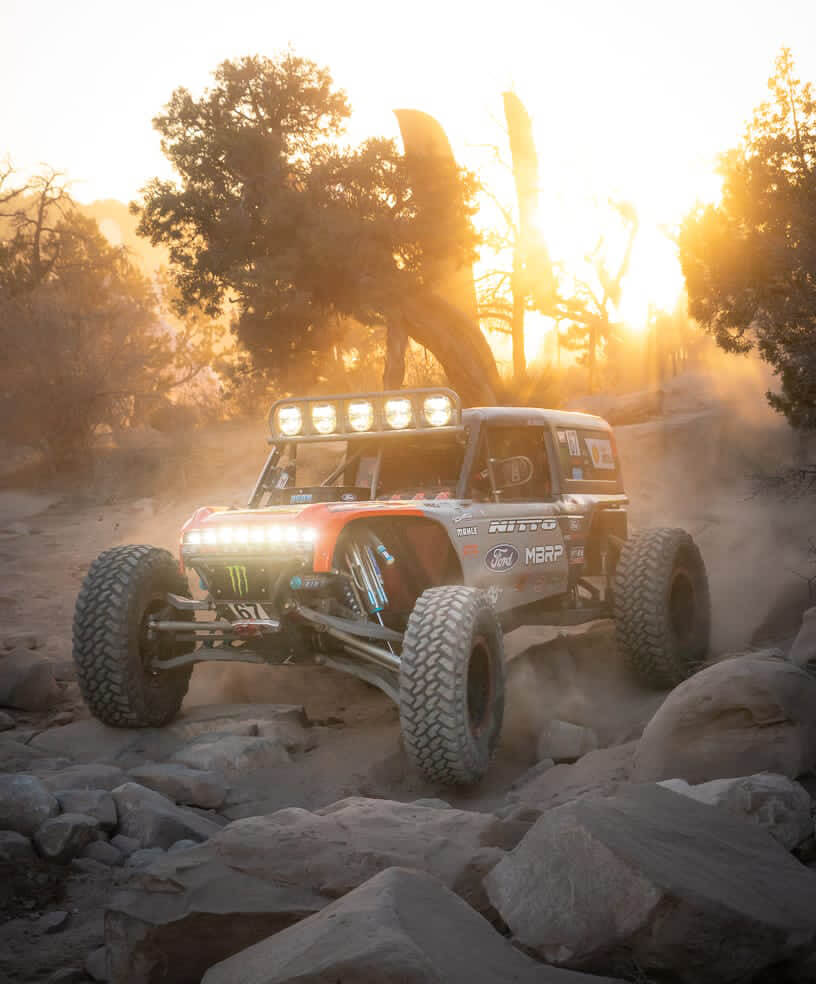 When the checkered flag waived, defending race winner Dan Fresh held the 1st place trophy high above his head for another 4500 Modified class victory. Dan was the pole sitter and led the 4500 race from green flag to checkers. Dedicated racer John Mathews from the Pacific Northwest finished with a strong 2nd place result, and the podium was rounded out by rising star John Grounds, who competed not only in the 4500 Modified class, but also later that day in the 4400 Unlimited class in his new Miller Motorsports solid axle car. Right in the mix were the 4800 Legends class cars, with over 25 entries. Combined, the 4500 / 4800 race had 35 cars on course at the same time. Legends had a close finish with Youngblood Racing’s Cody Young taking the top spot on the box, followed by David Hartman and Logan Goodall. 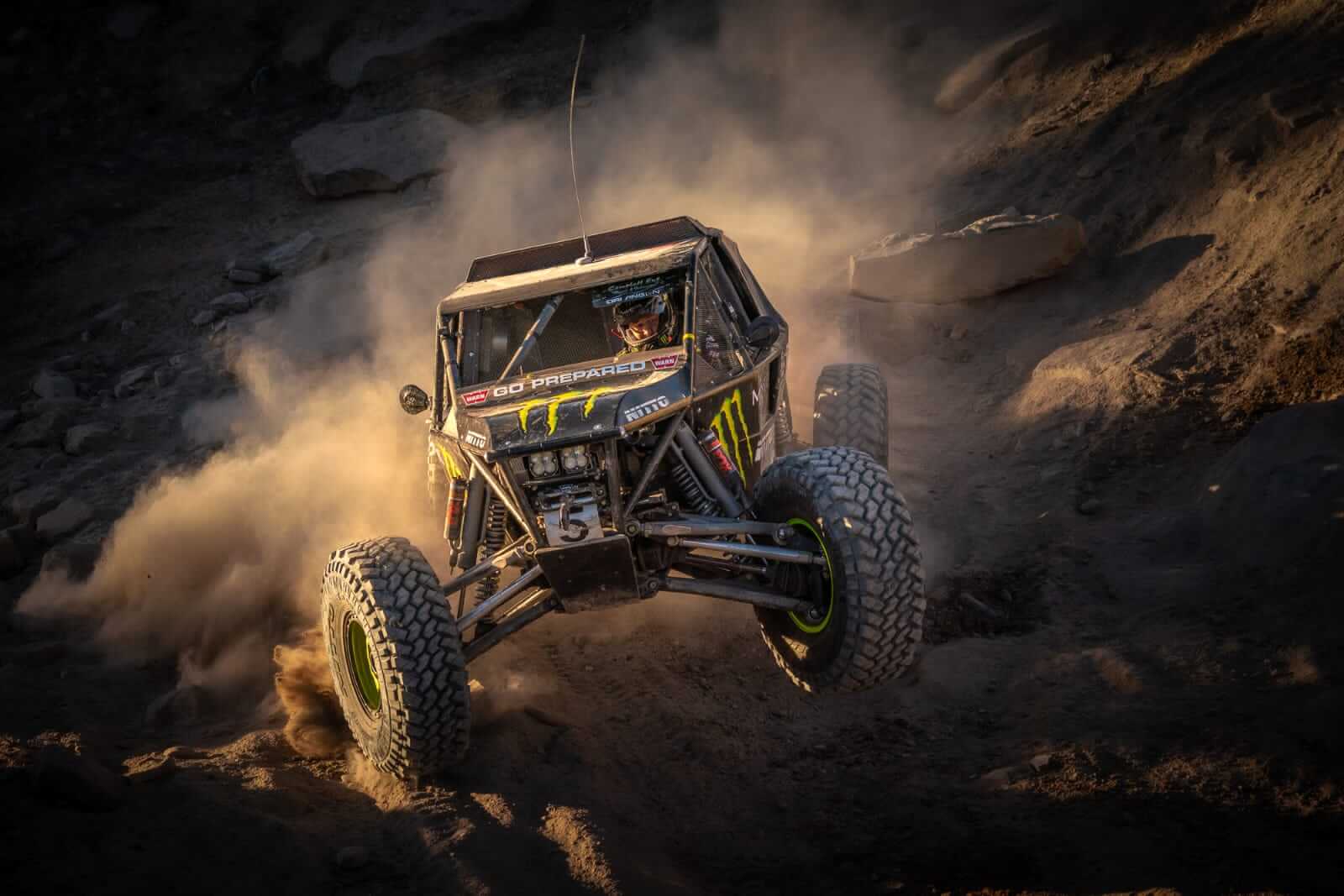 Finishing the 2021 King Shocks Area BRE Beatdown was the main event: the 4400 Unlimited class. The energy level in the arena goes to another level as the 4400 Unlimited cars fire up all that horsepower and the smell of race fuel sweeps across the infield. Rocketing off the line like a man on a mission was Bailey Cole in the #13, leading most of the race. As the teams fired off the line, it became clear that the day was going to be about speed and survival over the nearly 50 miles of non-stop focus and hard-hitting rock ledges and quick turns of Area BFE. A major theme of the event was flat right front tires. Somewhere on the course race director JT Taylor laid out was a “gotcha” that got the vast majority of the field found at some point.  Pit crews and drivers had their hands full all day. As the day battled on, a group of the top 10 – 12 cars continue to pull away from the pack, but not each other. By the time results were final, there was less than 10 minutes separating the top 8 and less than 1 minute separating positions 2 – 5. 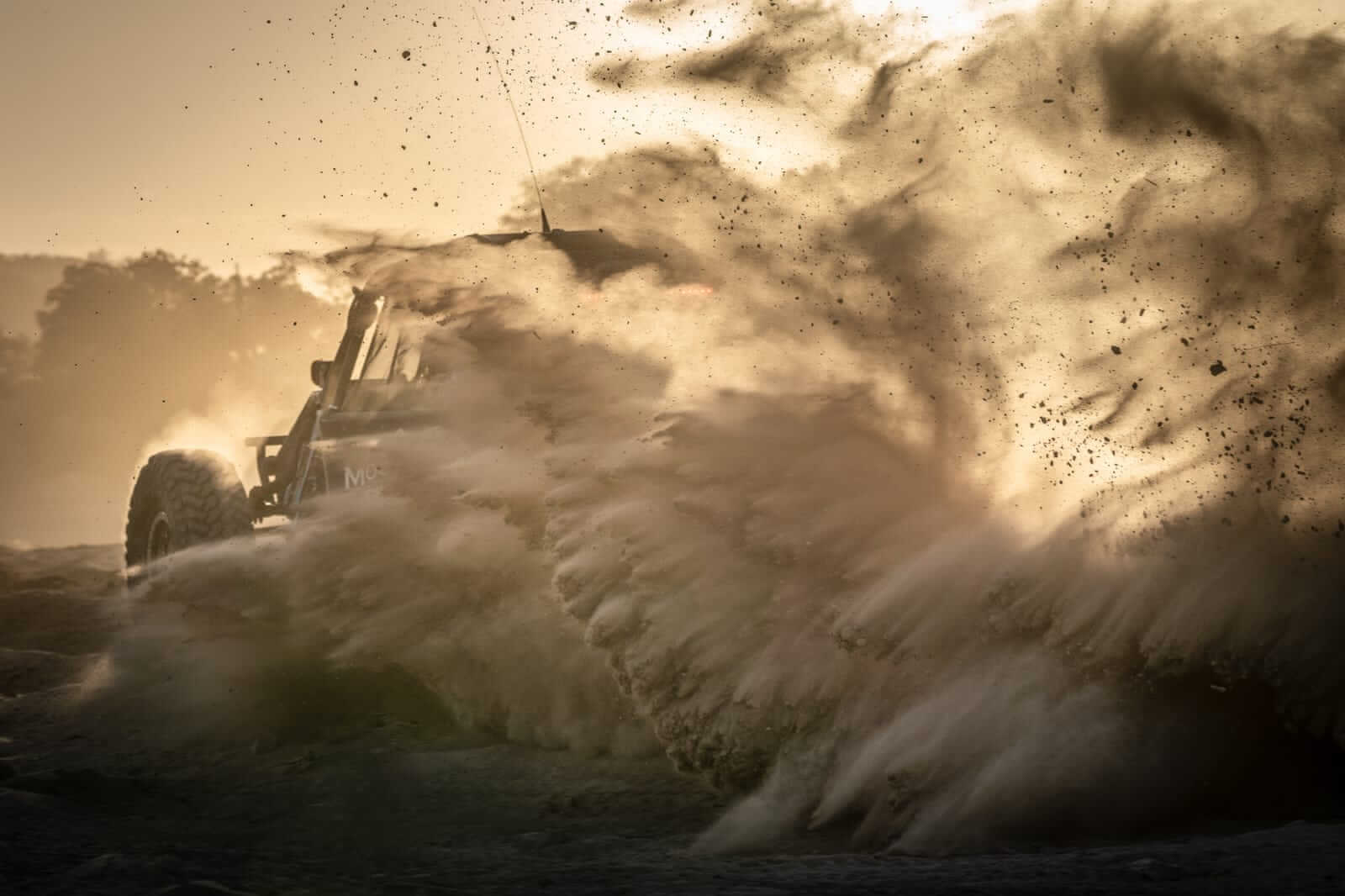 On a course that many predicted would favor solid axle race cars (the traditional wisdom on rock courses vs desert courses), it was a trio of IFS cars taking the podium at the end of the day. In fact, the 9 of the top 10 consisted of IFS cars. Bryan Crofts scored his first Ultra4 4400 class victory, charging from the middle to the front over the course of the race. Darian Gomez edged out JP Gomez (last year’s winner) for 2nd as JP once again earned podium honors taking home 3rd. Ford Bronco driver and 3-time King Jason Scherer was fourth, followed by Raul Gomez – giving Gomez Brothers Racing 3 of the top 5 positions. 3-time King Shannon Campbell was 6th, followed by Ryan Miller driving Bailey Campbell’s car in 7th. Fellow Ford  Bronco teammate and professional Fun Haver Vaughn Gittin Jr racked up another top 10 finish in 8th, followed by Tad Dowker in 9th and Jason Blanton in 10th.

The kickoff of the 2021 season was the OPTIMA Batteries King of the Hammers, presented by Lasernut. To earn National Championship points, driver must compete in KOH as well as Nationals (October 15th and 16th in Reno, NV), plus at least 3 regional races. The King Shocks Area BFE Beatdown was a thrilling start to the West region and has really set the stage for a points battle in all the classes. Next up is the East series opener in Rush, Kentucky April 16th and 17th. You can see the full schedule of events at www.ultra4racing.com