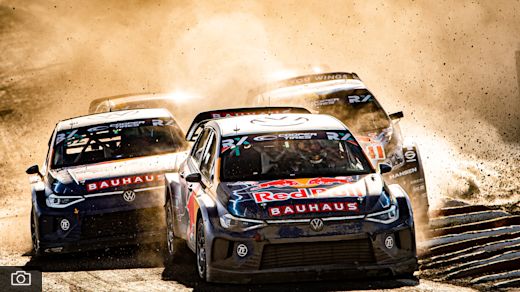 Kristoffersson makes history in Hell with electrifying win in Norway

The FIA World Rallycross Championship’s exciting new era got off to an electrifying start in Hell this weekend (13-14 August), with Johan Kristoffersson delivering a champion’s performance in front of a large and enthusiastic Norwegian crowd to battle back from misfortune to the top step of the podium.

As the popular Lånkebanen circuit returned to the calendar for the first time in three years, the most successful driver in World RX history served signal of his intent straightaway in Saturday morning’s SuperPole session, when he produced the ‘send of the weekend’ into the joker en route to the quickest time.

The Swede similarly set the pace in two of the three heats to soar to the top of the intermediate ranking – posting the fastest lap ever seen around the track in heat three – before fending off countryman Kevin Hansen to win his progression race, which earned him the right to select the prime starting spot for the first semi-final.

In the only real blip on an otherwise near-spotless weekend for him, an issue when the lights went out left the No. 1 Volkswagen RX1e car momentarily stationary. While the four-time title-winner fought back to make it through to the all-important final, it meant that instead of beginning from his customary pole position, he would be lining up in the middle of the grid.

Undeterred, and in characteristic Kristoffersson style, he immediately turned that disadvantage to his favour, hanging back slightly into the first corner as Ole Christian Veiby, Niclas Grönholm and Timmy Hansen tussled three-wide for the lead and neatly undercutting them all on the exit.

Once in front, he eased away to take the chequered flag more than three-and-half seconds clear of Hansen, in so doing cementing the 28th victory of his glittering career – and making history as the World Championship’s inaugural electric winner.

“All-in-all, it was a very good first weekend for World RX’s electric era, and it was great to see so many spectators at the track,” reflected Kristoffersson. “It’s been a huge challenge for everybody to get to this point, and all the teams have done an incredible job simply to be here. With everything being so new, there’s obviously still a lot of work to do, but it was impressive to see how well the cars ran with so little prior testing and we are learning more about them all the time.

“On our side, I’m super happy for the team most of all – to finish one-three and be leading both the Drivers’ and Teams’ championships is an amazing effort. I was very disappointed after the semi-final, but it was fantastic to fight back. We went from a big low to a big high in the space of about half-a-hour – and as a Swede, I’m not used to such major swings in emotion! But I’m so happy to win…”

Fellow world champion Hansen – who led the way overnight following the opening two heats – narrowly got the better of an entertaining scrap with rallycross returnee Veiby for the runner-up spoils, despite Hansen World RX Team struggling to match the speed of Kristoffersson Motorsport on the second day.

For Veiby, a maiden World RX podium in his first World Championship appearance since 2015 capped a strong comeback, with Klara Andersson similarly impressing on her way to fourth for Construction Equipment Dealer Team as the young Swede confidently held her own in illustrious company on her series bow. She crossed the line a fraction ahead of team-mate Niclas Grönholm, who endured a largely difficult weekend but deployed a sensational start in the second semi-final to outfox all of his adversaries.

In the supporting FIA RX2e Championship, Belgian teenager Viktor Vranckx maintained his flawless record so far this season with another commanding victory to back up his Höljes triumph, while Olympic skiing legend Aksel Lund Svindal showed an eye-catching turn-of-speed on his rallycross debut as he grew visibly in confidence and betrayed no nerves in the heat of battle.

Home hero Andreas Bakkerud sent the crowd wild with a hard-fought win in the FIA European Championship’s headlining Euro RX1 category. The Norwegian was there-or-thereabouts throughout, placing second in the intermediate ranking before out-muscling pole-sitter Anton Marklund at the start of the final to grab a lead he would not subsequently relinquish.

In Euro RX3, championship leader Kobe Pauwels returned to winning ways as he proved to be a class apart behind the wheel of his Volland Racing Audi A1, ramping up the tempo over the course of the weekend.

The FIA World Rallycross Championship next moves on to Rīga in Latvia on 3-4 September.

Full results for all classes can be found here

Yamaha Continues Investing in the Future for Outdoor Enthusiasts Previous post
At the rally Belgium, tire strategy dominates the scene Next post