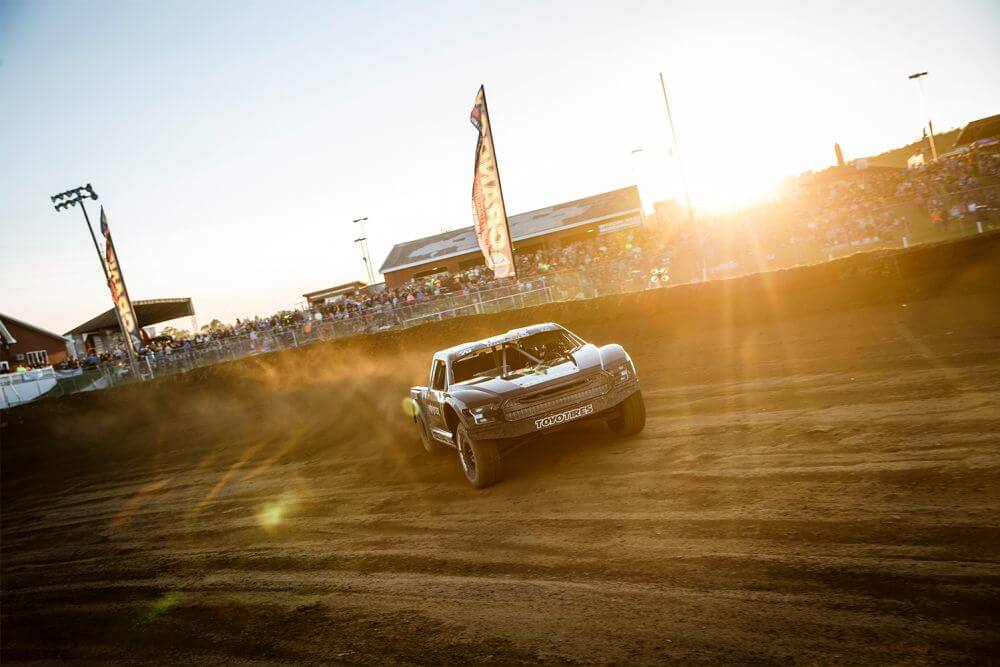 CRANDON, WISCONSIN – Kyle LeDuc and Toyo Tires® continued their success with two wins over the weekend. LeDuc took maximum points winning the first Championship Off-Road (COR) series Pro 4 race on Saturday and also took the checkered flag in the 51st Crandon World Championship Off-Road race on Sunday. Both wins took place at Wisconsin’s Crandon International Raceway. LeDuc relied on Toyo® Open Country® tires to get him to the finish line and achieve his fourth win in the COR series this year and the third World Championship win of his illustrious career.

Located in Crandon, WI, the International Raceway is one of the longest and fastest short-course tracks in the COR series circuit. At 1.5-miles in length, the course can see trucks hitting speeds that exceed 100 miles an hour. LeDuc and his #99 Monster Energy / Toyo Tires / WD-40 / Ford Raptor Pro 4 Truck pushed to the lead during the first lap of the Pro 4 race on Saturday. After battling for the lead during the first half of the race, LeDuc held off a tough field of competitors for the victory. LeDuc’s win has extended his points lead in the overall standings with two races remaining in the series. LeDuc has won four out of the eight races in the COR series this year and he looks to add another championship to his impressive resume.

“This weekend was a big one for points and bragging rights,” said Kyle LeDuc. “We raced with our Open Country’s and were victorious. Choose any Toyo Tire and you know you will have a dominant tire on and off the road.”

LeDuc is a six-time Pro 4 champion in the Lucas Oil® Off-Road Racing Series and his fourth COR victory this year continues an impressive streak for Toyo Tires and Team Toyo drivers. He looks to continue his success when the COR series returns to Crandon International Raceway in Wisconsin at the end of the month.

“Once again Toyo Open Country tires provided LeDuc with the durability and traction he needed to finish on top of the podium this weekend,” said Stan Chen, senior manager, events and sponsorships, Toyo Tire U.S.A. Corp. “With every impressive performance, he makes it clear he is serious about adding another series championship to his trophy case.”

Established in 1966, Toyo Tire U.S.A. Corp. represents the innovation, quality, performance, and excellent service that Toyo Tires has delivered worldwide for 75 years. The company offers a full line of premium tires for nearly every vehicle including light trucks, SUVs, crossovers, sports cars, luxury cars and hybrids as well as commercial trucks.  Many of the tires are built in the United States at their state-of-the-art factory in Georgia. To find the right tire for your vehicle as well as an authorized dealer, visit www.toyotires.com. You can also join the Toyo Tires community on Facebook, Instagram, and YouTube.