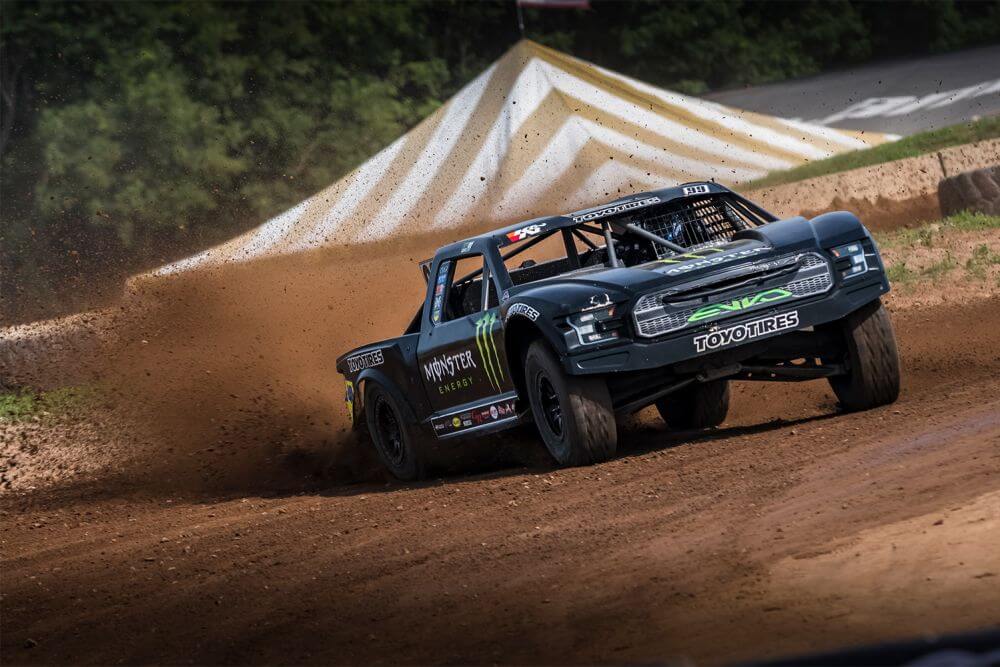 LENA, WISCONSIN – Kyle LeDuc and Toyo Tires® continued their success in the month of July with another Championship Off-Road (COR) Pro 4 win. The win took place during round four at Wisconsin’s Dirt City Motorplex. LeDuc relied on the all-new Toyo® Open Country® A/T III tires to get him to the finish line and achieve his third win in the COR series this year, and the 102nd short course win of his career.

Located in Lena, WI, the Dirt City Motorplex is one of the newest tracks added to the COR series circuit. After a rain delay which threatened the race start and cancelled qualifying, the Pro 4 race was finally given the green light. Leduc and his #99 Monster Energy / Toyo Tires / WD-40 / Ford Raptor Pro 4 Truck started Round 4 in the second position after the inversion and was able to take the lead and hold off a tough field of competitors on his way to victory.   LeDuc currently sits atop of the standings as he looks to add another championship to his impressive resume.

“Today, we definitely had the best tire,” said Kyle LeDuc. “The Open Country A/T III tires were on rails as we had the competition by a full second and were able to bring home our 3rd win of the season in the Pro 4 category.”

Leduc is a six-time Pro 4 champion in the Lucas Oil® Off-Road Racing Series and his third COR victory in two weeks continues an impressive streak for Toyo Tires and Team Toyo drivers. He looks to continue his success as the COR series travels back to ERX Motorpark in Minnesota next month, where he won round 1 and 2.

“We are thrilled Kyle took the checkered flag for a third time while driving on our new Open Country A/T III,” said Stan Chen, senior manager, events and sponsorships, Toyo Tire U.S.A. Corp. “These tires are built to handle all terrains in all weather, and they proved that this weekend.”

Established in 1966, Toyo Tire U.S.A. Corp. represents the innovation, quality, performance, and excellent service that Toyo Tires has delivered worldwide for 75 years. The company offers a full line of premium tires for nearly every vehicle including light trucks, SUVs, crossovers, sports cars, luxury cars and hybrids as well as commercial trucks.  Many of the tires are built in the United States at their state-of-the-art factory in Georgia. To find the right tire for your vehicle as well as an authorized dealer, visit www.toyotires.com. You can also join the Toyo Tires community on Facebook, Instagram, and YouTube.