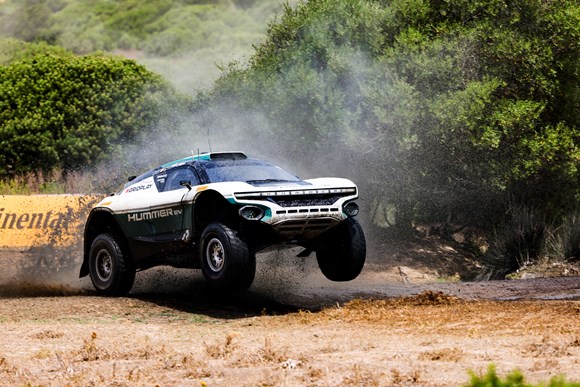 No.99 GMC Hummer EV Chip Ganassi Racing took a maiden victory in Extreme E as Rosberg X Racing were penalised for Johan Kristoffersson’s collision with Carlos Sainz Snr. that took the ACCIONA | SAINZ XE Team out of the race.

Kyle LeDuc and Sara Price inherited their first win in a stop-start NEOM Island X Prix I Final, that also saw XITE ENERGY Racing claim a first top-three finish. A red flag was brought out following a big accident for ACCIONA | SAINZ as RXR’s Kristoffersson collided with Sainz Snr. in the early stages.

It was the Spaniard who managed to edge in front of the pack from the start as the teams’ racing lines merged, but as the course narrowed Sainz Snr. collided with Kristoffersson and was sent into a barrel roll. This brought about the red flag at the end of the first lap and, ultimately, a 30-second penalty for the Championship leaders.

Sainz Snr. managed to walk away from the accident, while Kristoffersson continued in the race despite substantial damage to his ODYSSEY 21.

Alejandro Agag, CEO and Founder of Extreme E, said: “Carlos Sainz Snr. from the ACCIONA | SAINZ XE Team was involved in a collision with Rosberg X Racing in the opening moments of Extreme E’s NEOM Island X Prix I Final, in Sardinia this afternoon. He received a full check up in hospital as a precaution but was cleared and released this evening.

“The safety of our drivers is our greatest concern. Myself, along with the whole Extreme E family wish Carlos well and we hope to see him back in action this weekend for the next X Prix.”

Amongst the chaos, LeDuc found himself in second place on track for No.99 GMC Hummer EV, ahead of XITE Energy Racing’s Timo Scheider and the trailing Hedda Hosås in the JBXE car as the teams entered the Switch Zone.

In similar fashion to the Desert X Prix Final in NEOM, the race restarted for a one-lap shootout, with the four teams released at intervals that matched how they had entered the Switch Zone.

No.99 GMC Hummer EV’s Price began her chase of RXR’s Mikaela Åhlin-Kottulinsky in pursuit of that elusive maiden victory for her team.

Despite missing bodywork from the front of her ODYSSEY 21, Åhlin-Kottulinsky extended the lead given to her by teammate Kristoffersson to cross the line on track in first, but following a stewards investigation RXR were demoted to third, confirming No.99 GMC Hummer EV’s first Extreme E win and XITE Energy Racing’s best series result to date.

Even with the penalty, Nico Rosberg’s outfit still lead the Championship standings with 50 points having once again secured the extra five points for going quickest in the Continental Traction Challenge. No.99 GMC Hummer EV are now their nearest challengers with 37 points.

Kyle LeDuc, No. 99 GMC HUMMER EV Chip Ganassi Racing, said: “If you look at the numbers, we went from first in practice, to last in qualifying and back to first as the race winners. It was a rollercoaster ride, and I don’t know how to put it into words, but we all did our job today. We have a great GMC HUMMER EV team where everyone works so hard. We’re ready to take this success and apply it to the next race this weekend.”

Sara Price, No. 99 GMC HUMMER EV Chip Ganassi Racing, said: “We did what we had to do to get through the Crazy Race today. We were consistent and pushed through the Final race to get our first win. It was such a team effort all around; I’m so proud of everyone. We made some serious progress this week and I’m ready to take on round three this weekend.”