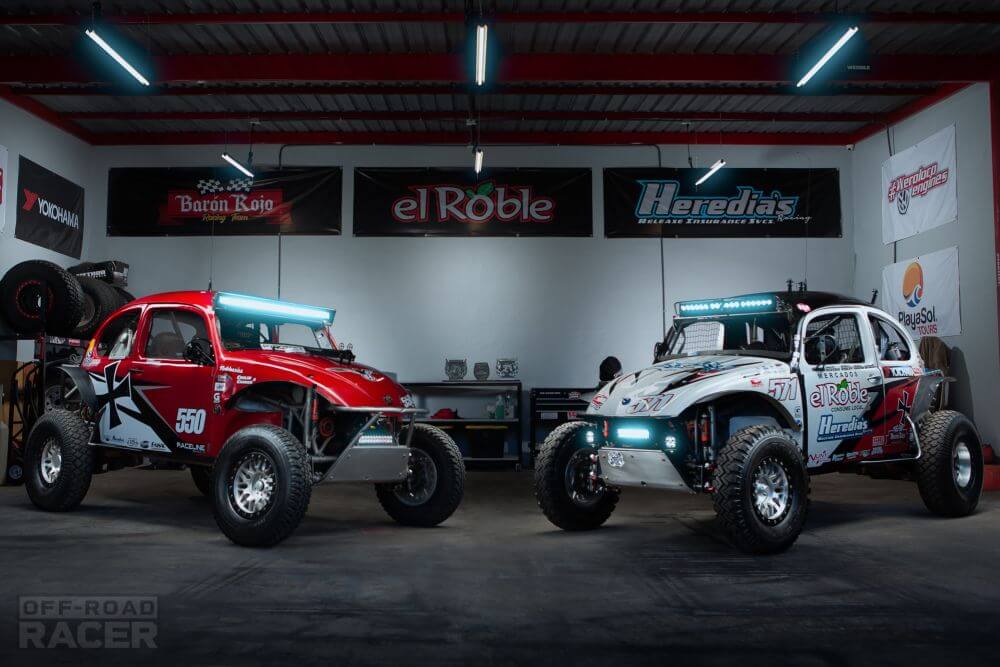 Meet the Red Baron of Baja

The Red Baron or “Baron Rojo” is a 5/1600 race team located in Ensenada that in only two years of racing became successful in both RECORD and SCORE during the same year, but how do they do it? As a team. Coming from nothing, they began gaining great success in the RECORD Off-Road Series, the Baron then made the jump to the premium SCORE events and like the original WWI ace-pilot, they become a “Flying Circus” or should we say “Racing Circus” moving from to race to race winning battle after battle. But again, much like the the original Red Baron, it took a squad of people to be successful, both Red Baron’s prove that team work is really hard to beat.

Before becoming a team, in 2018 during preparations for the 50th anniversary Baja 500, the Red Baron led by Chimbo Valenzuela knew this was a lifetime opportunity to be in the off-road history books by winning the most-anticipated Baja 500, but like him there was another 200 teams thinking the same so he knew this task was not meant for himself only, he needed a “flying squad”.

This is where Pedro Avalos and his team Heredia Racing come in, being in the same position as the Baron, Pedro manages to contact Chimbo to talk about the upcoming race. They agree to team up joining forces to tackle what could be a dream-come-true.

Race day arrived, Pedro tells the story “David Heredia started in 6th, by racemile 110 he gave it to Marco Robles who maintained the rhythm until San Matias where Chimbo had the task to go through Mike’s driving at night, and leaving the car in 3rd place one hour behind the leader. By 1:00a.m. I jumped into the driving seat leading by Santo Tomas and arriving to the finish in first place” setting the statement that teamwork makes the dreamwork.

Just two weeks later, they tried their luck again in the popular RECORD Ensenada-San Felipe 250, one of the most popular races for the 5/1600 class. The finished the race in 2nd place.

This is where they realized together they’re stronger so why stop at just a couple of races. After a quick discussion the 4 drivers decided to combine everything in one team, aiming to win it all in Baja.

“We are rookies we know it, but we are working in the most professional way. We pre-run, we practice, we exercise to endure the long days of racing. Nothing to lose everything to win is our team motto”

The team consists of two 5/1600 race vehicles, one to race RECORD and the other in SCORE. Pedro Avalos, Chimbo Valenzuela, Josef Aguayo and Marco Robles, 4 drivers of different talents that together are a force to reckon with. Following the 2018 season, they also won the Baja 400 in Tijuana. They decided to skip the Baja 1000 to go all-in for the upcoming 2019 season.

But the 2019 started with issues, one of the team members suffered an incident non-racing related that made them skip the first race of the SCORE season, the San Felipe 250. “We all talked together and decided if one team member won’t race, none of us will race, it’s either all of us or none, we play as a team” Chimbo told us.

After skipping the 250, they raced the whole RECORD season reaching podium finishes each race. La Vuelta 200 2nd place, Ensenada San Felipe 250 1st place, San Vicente 1st place getting the RECORD 2019 Championship without no one getting close to reaching them.

During that same year, but now racing SCORE they won the Baja 400 in Tijuana and the Baja 500 back-to-back. “We had such a hard time fighting since the first blockade in RM 17, halfway through the race we were 3 hours behind the leader, but we never gave up. We managed to come back after great driving by all the 4 team drivers, and finished 1st just right before they closed the finish line. It was amazing, tears everywhere. (laughs)” said Pedro Avalos when we asked about that back-to-back Baja 500 win.

In 2019 SCORE implemented the new rule of Must-race all events to apply to the championship. They were first in points with huge a lead before finishing the season, but since they couldn’t race the 250 even if they won the Baja 1000 they weren’t allowed to get the championship, making the decision to again skip the 1000 to put all-in again for the 2020 season.

And then 2020 happened and we all know where we are. They managed to race the only two races that happened in Baja, San Felipe Desert Mayhem 175 finishing 2nd place and the first RECORD race La Vuelta again getting 2nd. “We are frustrated like everyone else but there’s nothing we could do but to be safe and wait. We will go for any race that happens this year, we still want that SCORE Championship that we know will not be the same with only two races, but those two races means everything in off-road racing”

The Red Baron will assault the terrain of Baja, much like the original Baron did in the skies over 100 years ago, as soon as racing starts again. We want to thank Pedro for inviting us to their shop to tell their story, we will continue to bring more stories like this only at Off-RoadRacer.com