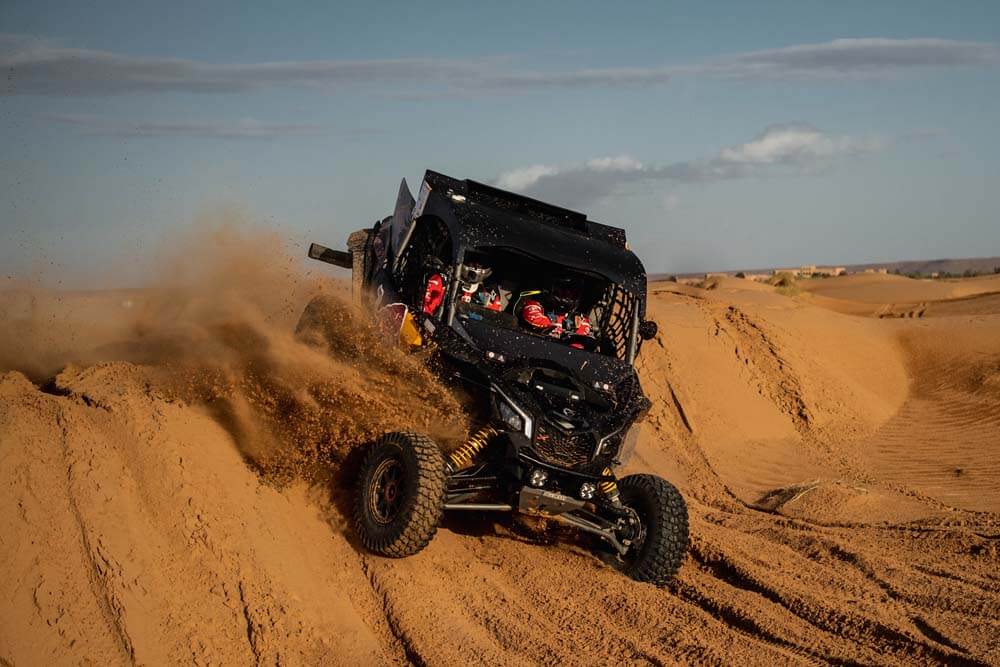 The First Steps in the Rally-Raid Discipline

For several years now, the Merzouga Rally has provided an exceptional opportunity to experiment for all-terrain enthusiasts attracted by the rally-raid discipline. To commit to the choice of taking on a demanding discipline, it is helpful to be able to test your mettle without having to outlay significant resources. This is what the Merzouga Rally will be offering from its 11th edition onwards, with a considerably lower price for registration. Nonetheless, the race will still serve as a means for qualifying for registration on the Rallye du Maroc and the Dakar. Among the competitors registered for the 2020 edition in Saudi Arabia, 23 rookies took part in the Merzouga Rally last spring.

First-Rate Coaches for Navigation and Taming the Dunes

Adapting to the rally-raid discipline chiefly involves learning how to read a road-book and ride or drive following its instructions. It also means discovering how to tackle the dunes, which are absent from the tracks on enduro and motocross races. In Morocco, the Sahara Desert is ideal for such an exercise. To help novices or competitors who want to improve, several of the discipline’s champions and former winners or podium finishers on the Dakar will be presenting sessions and dispensing personalized advice, both in the briefing room and out on the terrain.

The five days of racing on the programme will take the riders, drivers and crews along a demanding and varied route. However, on the Merzouga 2020, both the specials and link stages must be completed within a given time, but no standings will be edited or published. Nevertheless, each competitor will be able to retrieve their entire GPS read-outs at the end of the day, which will be a valuable tool for assessing actual pace, analysing mistakes and measuring progress. The accuracy of the data collected could also allow the elite riders’ and drivers’ teams to set up a test programme in an almost competitive context.

Two Participation Formulas:
With or Without the Road-book

Depending on the proficiency of each starter on the adventure, two categories will be open on the Merzouga 2020. The bikers and quad riders registered for the “Desert Enduro” formula will tackle the route with a GPS that guides them throughout the day and can take part on an enduro bike or quad. The competitors taking part in the “Moto Rally” formula will possess identical equipment to the Dakar, including road-books drawn up along the same criteria.

A Unique Event for the Community

The most heavily involved official teams in the discipline, just like the smaller structures, are invited to take part in this rally-raid themed gathering. No registration fees will be required for assistance vehicles and personnel. The Merzouga Rally will allow professionals to work in a test or training configuration, whilst vehicle finishers will be able to propose personalised initiation days, vehicle trials or accessory tests, among other things. The event’s position in the calendar is also ideal for planning the rest of the season in light of the findings unearthed on the sands of Morocco.