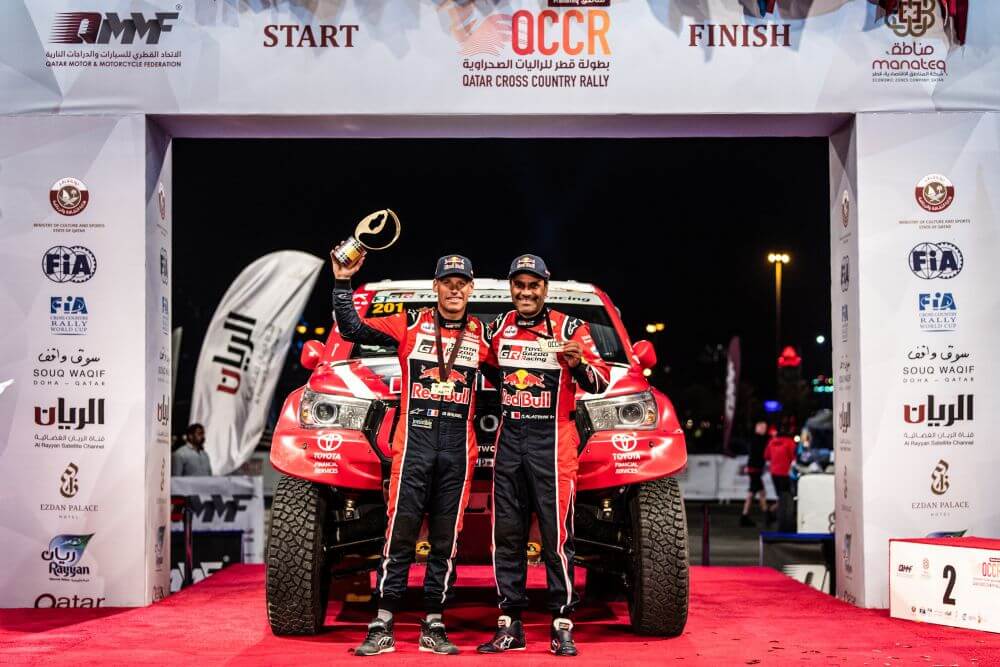 Nasser Al-Attiyah (QAT) is the homecoming hero once again at the Qatar Cross-Country Rally after dominating from start to finish. Al-Attiyah and co-driver Mathieu Baumel (FRA) won four of the rally’s five desert stages to secure a winning margin of over one and a half hours.

Al-Attiyah arrived on the start line with plenty of motivation, with not just his home crowd to impress but precious FIA World Cup for Cross-Country Rallies points on the line. Also, the Qatari driver was keen to get back to winning ways after having to settle for second place at the Dakar Rally earlier this year.

“This was not an easy race with lots of navigation. On the final stage we had three flat tyres. For the last 50 kilometres, we lost the pressure in the tyres and we reached the finish line with two punctures. But I won the stage and I lead the championship, so we’re happy.” – Nasser Al-Attiyah

Al-Attiyah and Baumel showed all of their desert racing expertise over the 1,445 kilometres of timed special stages at the Qatar Cross-Country Rally. On Sunday’s opening stage the duo took the stage win to open up a lead of over five minutes. The pair then backed that up the following day by once again setting the quickest time, and stretching their advantage in the general classification to over half an hour.

“This rally is very difficult if you don’t take care with the speed. You will get a lot of problems. From the beginning, it was very tricky. Mathieu (Baumel) did a good job.” – Nasser Al-Attiyah

Al-Attiyah and Baumel continued to press home their superiority for the remainder of the rally, winning every stage except for stage four which was shortened due to adverse weather conditions.

Fellow Toyota pair Yazeed Al-Rajhi (SAU) and co-driver Michael Orr (GBR) did what they could to stay close to the leaders. Despite their best efforts the second placed crew ended the rally 1h31m40s behind the winners.
Third place was bagged by Kuba Przygonski (POL) and Timo Gottschalk (DEU) who were making their debut in an Overdrive Toyota Hilux. Przygonski’s superb driving and Gottschalk’s skillful navigation made sure that the duo played their part in a 1-2-3 result for Overdrive Racing. Przygonski and Gottschalk’s third place finish was all the more impressive as they had to battle back from sitting in seventh place after two stages.

“We’re pleased with this position after the problems. In the end, it was a good race for us. We learn the car and know what to do to be faster in this car.” – Kuba Przygonski

With Al-Attiyah and Baumel collecting maximum points in Qatar it is up to the chasing pack to try and hunt them down at the next round of the FIA World Cup for Cross-Country Rallies. The best rally-raid racers on the planet will be in action once again at the Abu Dhabi Desert Challenge (March 20-26).