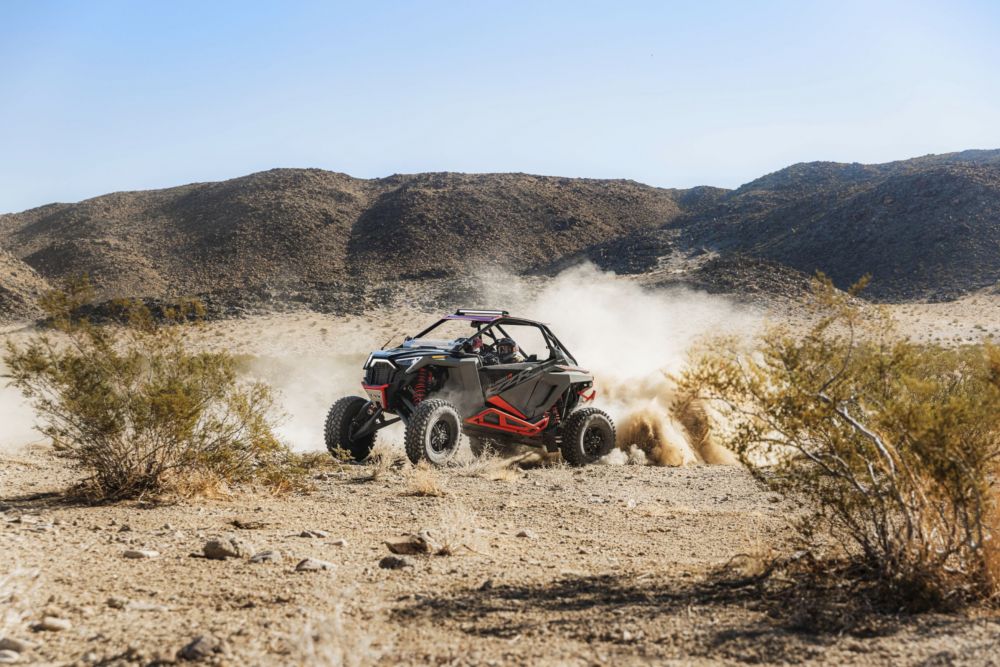 The 2022 Polaris RZR Pro R and Turbo R are bigger, more powerful, and more capable than any UTV before, requiring an innovative approach to suspension. Innovation requires breaking boundaries.

For the first time in the UTV industry, FOX found a need for a 3-inch diameter front shock to control the RZR Pro R and Turbo R’s increased power and travel. For the rear shocks, FOX built the longest UTV shocks to date with a massive 15.6 inches of stroke. Building off its race-winning Live Valve platform, FOX integrated its X2 technology so that compression and rebound could be adjusted independently of one another by the Polaris DYNAMIX DV system.

From the start FOX and Polaris knew the goal was to design a suspension system that performed even better than the current generation of FOX Live Valve Internal Bypass shocks. The obvious — but also most challenging — choice was to replace the single electronic compression controlling semi-active base valve with two: compression and rebound.

By combining Live Valve’s electronic control and X2 dual base valve technology on each shock, a new evolution in shock performance was born. Polaris’ DYNAMIX DV system and algorithm independently controls compression oil flow and rebound oil flow. Now, when the onboard ECU receives inputs from multiple sensors, it can adjust the shocks in real time like never before even when compared to the groundbreaking previous generations of Live Valve and DYNAMIX.

Getting a system like this to work seamlessly in the background while you concentrate on driving flat out required FOX and Polaris to work together over the past four years during many testing trips and tuning sessions to perfect Polaris’ proprietary onboard electronics and FOX’s proprietary shock technology.

An incredible ride isn’t worth much if the shocks don’t last. This is where FOX’s experience in design and testing really came into play, taking a functional concept and turning it into durable shocks proven to hold up to triple digit temperatures in the harshest environments.

FOX’s 3.0 Live Valve X2 Internal Bypass shocks deliver race-dominating and position-sensitive damping technology and performance in a hassle-free package. This patented technology contains internal passages that allow fluid to bypass the piston through regulated ports as it moves through the travel. They also provide a plush, predictable ride over normal off-road driving conditions with the ability to ramp up damping force in extreme use. 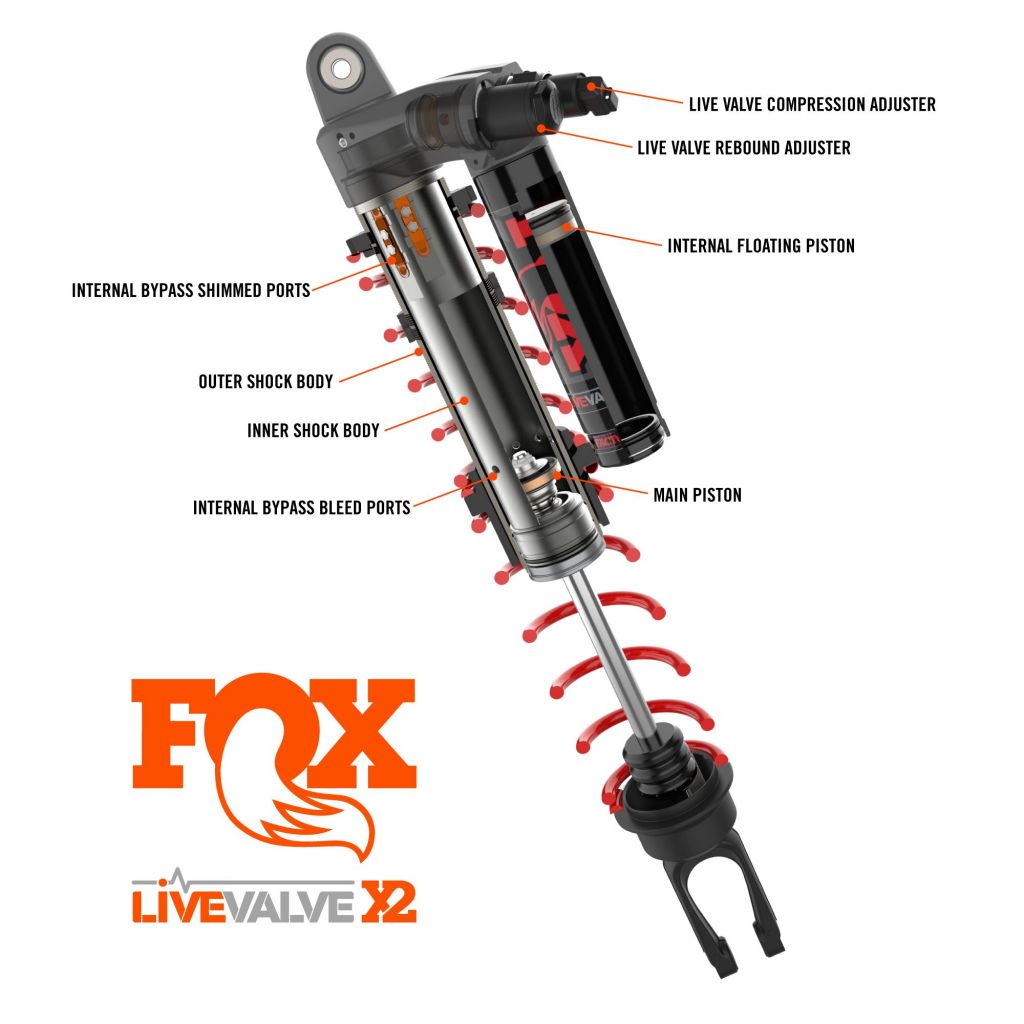 You stay comfortable in the seat and in control of your vehicle. The DYNAMIX DV system is able to detect real-time data from accelerating, braking, steering and inertial sensors every few thousands of a second and independently adjust the Live Valve X2 compression and rebound base valves to their optimal settings for that moment. And the one after that. And the one after that.

This independent adjustment over compression and rebound ensures that the vehicle maintains a level body position from start to finish in a corner. The inside shocks will absorb bumps by decreasing compression damping and simultaneously maintain a lower inside ride height by adding rebound damping. The outside shocks will stop body roll by adding compression damping and maintain a raised outside ride height by opening rebound damping. With each shock independently adjusting compression and rebound, the vehicle stays level at the optimal place in its travel, keeping you comfortable and in control.

All these enhancements seamlessly work to stabilize the new Polaris RZR Pro R over the roughest obstacles and through the biggest whoops at speed. And since they wear the FOX name you know they’ve been designed with the highest quality material, put through lengthy dyno evaluations in FOX’s state-of-the-art test labs, and out in the worst real-world situations during field durability tests before they met FOX’s seal of approval and commitment to quality. This is cutting-edge technology, born in racing, built to last! 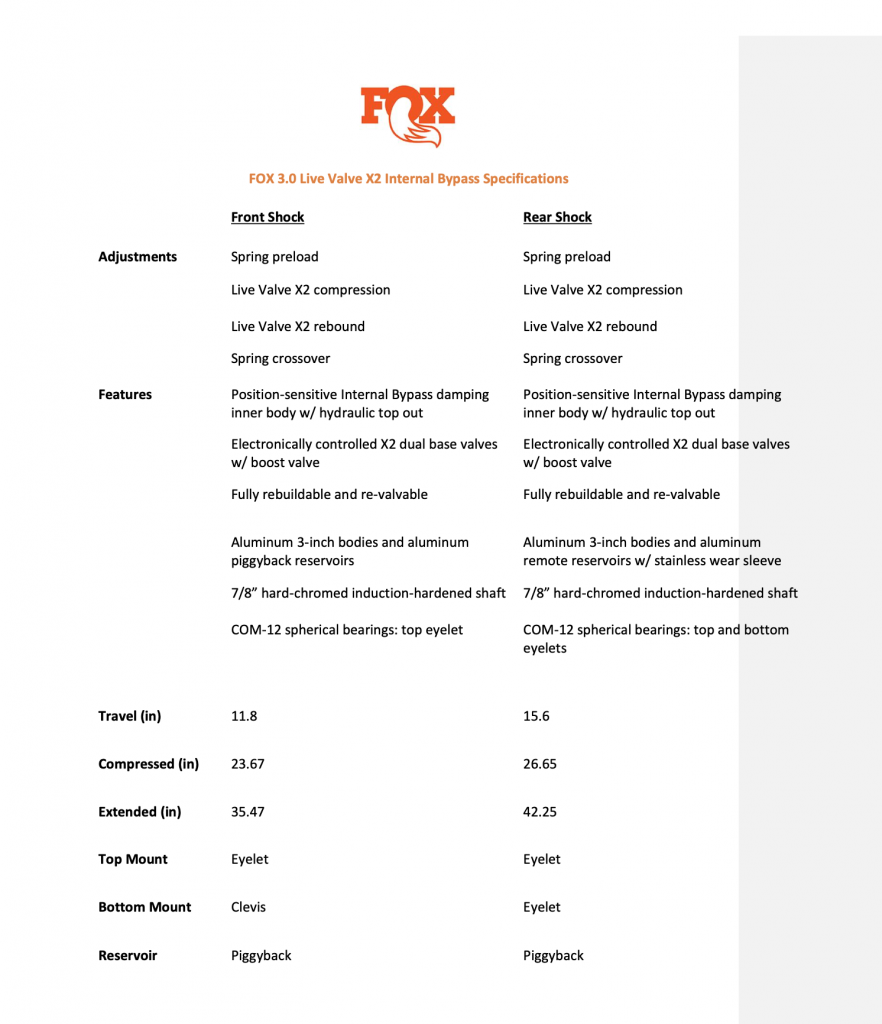