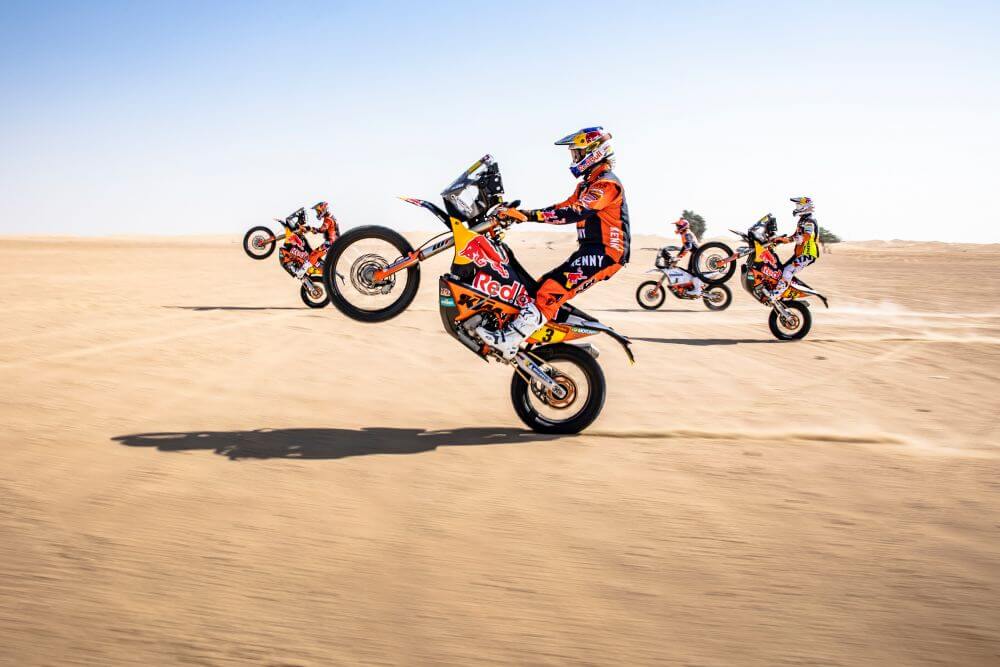 No time to lose for Red Bull KTM Factory Racing – 2021 Dakar Rally is just one month away!

December 3, 2020
Red Bull KTM Factory Racing are counting down to the 2021 Dakar Rally with the goal of reclaiming their dominance in the bike division. The team were denied a 19th consecutive bike race win 11 months ago in Saudi Arabia. Since then they have been focused on regaining their Dakar crown and coming up with a fresh looking KTM 450 Rally bike.

With the route of the upcoming Dakar now revealed, preparations for the rally have gone into overdrive for these serial winners. We now know that 4,800 gruelling kilometres spilt across 12 timed special stages waits for the riders in the Middle East. The first of these 12 stages gets underway on January 3, 2021 and the finish line will be crossed by the eventual winner back in Jeddah in January 15.

“On day one you know that things are going to be tough, but it’s the only place in the world that you want to be. It’s like climbing a mountain, you need to take all those steps before you can enjoy arriving at the summit.”– Matthias Walkner

Despite a shortened rally-raid season in 2020 due to the global pandemic, there remains a group of elite offroad bikers looking to start 2021 in the best way possible – by winning the Dakar Rally. Among this group of fearless riders are the Red Bull KTM Factory Racing trio: Toby Price (AUS), Sam Sunderland (GBR) and Matthias Walkner (AUT).

Toby Price wasted no time in achieving legendary status at the Dakar, on each of his five finishes he has ended up on the podium. He has two wins and three third place results to his name. His win in 2019 was perhaps the most remarkable Dakar story of recent times – he took victory despite racing much of the rally with a broken bone in his hand. The determined Aussie biker once again has the podium in his sights in 2021.

“So far I’ve either finished first or third so I either come home with a big trophy or a little one. Hopefully things follow the system they have been doing, I finished the previous one third so the next one will be a win!”– Toby Price

Sam Sunderland made a rapid start to the first Dakar held in its new home and bagged an early stage win. Unfortunately, a crash on stage five ended his bid for a second Dakar title to add to his victory in 2017. The first and only British biker to win the Dakar is looking forward to testing himself on Saudi Arabian terrain once again next month.

“Once you’ve tasted victory, your only goal is to try and rematch that. I’m going there with victory in mind, but I also want to do everything I can to make sure I arrive to the finish and stay safe. I had a really good feeling during the last Dakar. I was enjoying the terrain and felt confident with the speed, but I came unstuck by a little issue.”– Sam Sunderland

Matthias Walkner has not let the global situation prevent him from training hard this year and is set to arrive at the start line in great condition to race. This will make a change from the 2020 Dakar when the Austrian was still recovering from injury while on his way to an impressive fifth place finish. The 2018 Dakar champion and 2015 FIM Cross-Country Rallies World Championship winner wants to see the Austrian flag flying high again at the world’s toughest race.

“I’m working towards our goal of bringing KTM back to first place at the Dakar. We are still super, super hungry to bring home the win.”– Matthias Walkner

Sharing the bivouac with these three former champions will be Dakar rookie Daniel Sanders (AUS). The KTM Factory Racing Junior Rally Program rider could not wish to be around better company as he makes his Dakar debut.

New for the 2021 Dakar is the curtain-raising prologue which will take place on January 2. This will be the first glimpse of bikers in action ahead of their departure from Jeddah on stage one the following day.