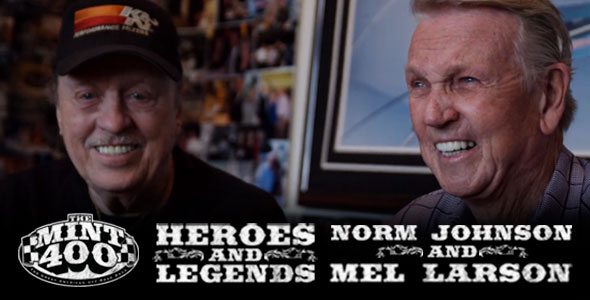 Norm Johnson and Mel Larson: Heroes and Legends of the Mint 400

The storied history of the Mint is steeped in celebrity, drama and excitement. The Mint 400 has held the title of the toughest, most spectacular off-road race in North America since 1967 when it was first run. The race was created by Norm Johnson who was race director through 1970 and a participant from 69 to 82. Initially, the race was a public relations event promoting the Mint Hotel’s annual deer hunting event. What started out as hotel promotion soon grew into a legitimate desert race. The second year it was run, Norm enlisted the help of his friends, famed race car drivers Mel Larson and Parnelli Jones.  Mel took over as Race Director and Norm remained the Mint 400 consultant through 1973.  With their endorsements and a guaranteed prize purse of $30,000, the participant list grew exponentially. Norm Johnson and Mel Larson recount the founding and first running of the epic 400 mile off-road race.