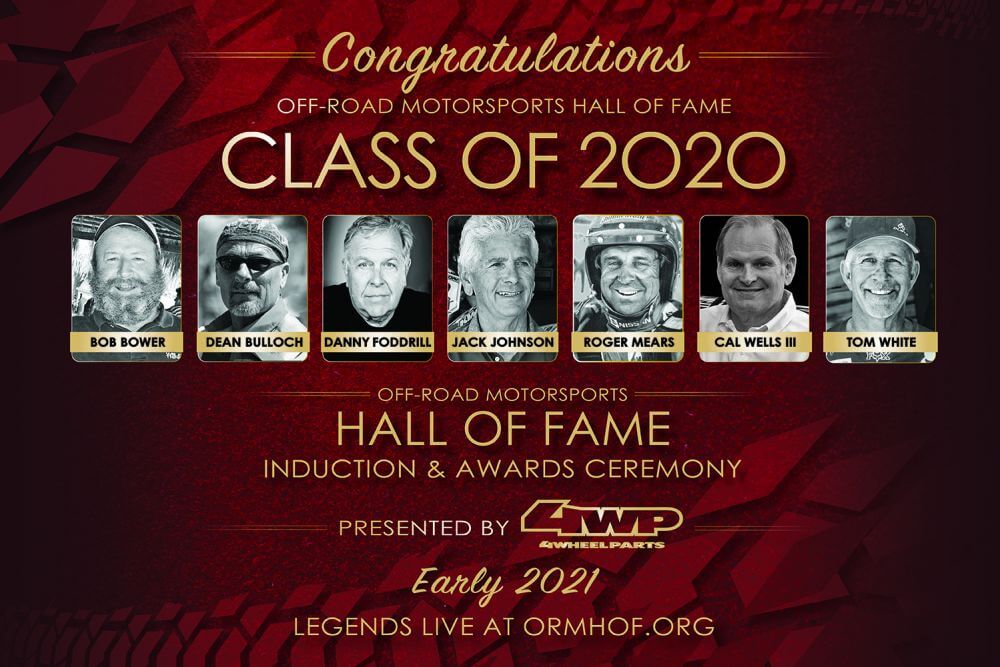 Off-Road is racing has an incredible history filled with countless stories often told by campfires for decades. In 1967 Ed Pearlman formed the first recognized sanctioning body dedicated to exclusively to off-road racing – The National Off-Road Racing Association (NORRA). The inaugural event produced by NORRA was the Mexican 1000 – soon to become the legendary Baja 1000. 50+ years later, legends have come and gone – while others are being formed as we speak. We bring to you the Class of 2020 – Congratulations to all of this years inductees!

He’s a street kid from word one, always has been, and always will be.” — Michael Coates, Editor, Petersen’s 4Wheel & Off-Road, January 1983
Congratulations to Bob Bower, ORMHOF’s 100th inductee.
At age 8 Bob read about the Stroppe Lincoln teams that dominated the 1953 Mexican Carrera Panamericana and later learned about the Baja 1000 race to La Paz. It became a fixation with him to be part of it someday. Read More

Dean Bulloch has been involved in the racing world for most of his life, starting in the 1970s with motocross, snowmobile drags and cross country racing. In 1978 he opened a powersports dealership in Utah, D&P Performance. In the 1980s, Dean and his team dominated the motorcycle trials bikes national series. Over 40+ years of racing, he has 184 wins.
In 1991, Dean built a National Hot Rod Association (NHRA) drag bike, winning the Pro ET NHRA/Winston Series. Read More

Danny Foddrill began his journey into off-road in the late ’60s. He and his friends would ride out to the desert and create their own races, long before most of the off-road racing series were established. They would take Jeeps, dirt bikes, or their dune buggies and drag race just outside of town. His passion for building and off-road started way back in high school on the front porch of his parent’s house, where he built a Jeep from the ground up, including the headers. Read More

Versatility, tenacity, commitment, dedication, longevity, dominance: These are just a few of the words that describe the off-road racing career of Jack Johnson. A racing career that spanned some 40 years, Jack amassed a staggering 23 SCORE, HDRA, and Best In The Desert event overall wins in a car, truck, or on a motorcycle. A tremendous record no doubt, but one that no one is surprised to acknowledge because even at an early age, Jack’s career was marked for greatness. Read More

When the name Mears is mentioned in the motorsports industry, Rick’s name is the first to come to mind for most racing enthusiasts and competitors. Only three drivers — Rick Mears, A.J. Foyt, and Al Unser — have captured the Indianapolis 500 four times.
But ask Rick who was one of the greatest drivers for him to race with and watch and he’ll talk about his older brother Roger, who was one of the top drivers in off-road history and one of the most well-rounded racers in all forms of four-wheel competition. Read More

Born October 12, 1955, Cal Wells began his motorized journey in 1968 by cleaning auto parts at an engine rebuilding shop in Westminster Calif. He quickly became enamored with how engines and automobiles operated and kept that passion for learning about cars throughout high school.
In fact, when he graduated Cal’s yearbook included his senior salutation stated his plans to “Race the Baja 500, The Baja 1000, The Daytona 500 and the Indy 500” Overall, I plan to race, race and then race some more.” Read More

Tom was raised near the ocean in Huntington Beach, California, where he grew up surfing before discovering his life-long passion: Motorcycles.
Tom soon found his niche in flat track racing, eventually earning national number 80 as a professional. But his day job was fixing motocross bikes for a shop in Orange County, California. In time he developed ideas about specialty parts that he and his brother Dan, with help from their father, turned into a thriving business. Read More