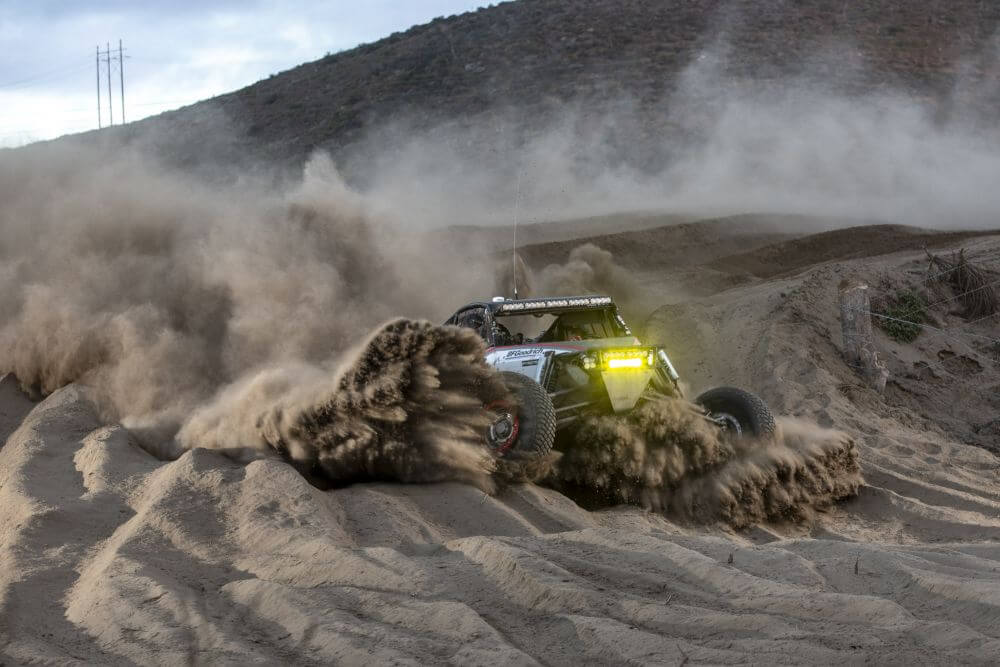 Let's be honest. Racing is a polite way of getting into a fist fight.

Let’s be honest. Racing is a polite way of getting into a fist fight. F1 is fencing, Road racing is boxing and Off-Road racing is the MMA of motorsports. Every November we have an all in knock down drag out fantastic brawl called the Baja 1000. Fortunately it takes place in the stunning beauty of Baja, California, Mexico. This year’s race is especially important because it either hold back the evolution of four wheel drive trophy trucks or be the validation that the platform needs to become the preferred platform in off-road racing upping the stakes across the board substantionaly. Yet in order to do that one of the four four wheel drive trucks must win, besting the seasoned field of race proven two wheel drive trucks. The checkered flag is completely up for grabs. Just like in MMA the beauty of off-road racing is that money, knowledge, preparation, team, vehicle, and your mind can all be perfect and you still can hit rock or break two dollar part going from hero to zero in seconds.

The favored team is the dou of off-road racing prodigy Andy McMillin and off-road champion Bryce Menzies in a four wheel drive Mason trophy truck. One of the most technically advanced trucks in the field they have the experience, the financial support, and the team to win. If they win it will continue to prove the newly evolved four wheel drive platform potentially pushing all the top competitors to move to that platform. Four wheel drive is undoubtedly supeerior, but the question is will it live? Off-Road racing has the distinct ability to absolutely pulverize technically advanced ideas and leave them for dead in the desert. Yet evolution is undeniable and four wheel drive trucks have now won Parker, Laughlin, Vegas to Reno, but they have yet to win the two that count the most The Baja 1000 and The Mint 400. Wins at both will change the game forever.

One thing is guaranteed. There will be drama and plenty of it. There will be crashes, mechanical failures, and pit mistakes all of which will constantly change the outcome of the race. And the weather, we are right in the middle of hurricane season in Baja so weather can become a factor at any moment.

The course is technical and brutal. This race is going to be won on race IQ and discipline, brains not brawn. The course has already been changed and speed zones added. Pre-running has already begun giving advantage to the racers who have the resources and the time to take advantage of the opportunity to run the entire course multiple times making their own notes and plans. This years course is similar to the Baja 500, with a San Felipe 250 added on with one major difference, the top loop that starts with borrego backwards with giant square edged holes to to El Chinero. After you survive that you will be rewarded by the sandy washes of the Saldana loop, then the sandy flats of Laguna Salada before you begin making the rocky narrow climb up over the Los Pinos summit to Santa Catarina and then into K77. After all of that you still have 70 miles to the finish. The Baja 100 course is long, rough, and technical, passes will be hard fought. You will have to earn your finish position.

UTVs have now become the largest most competitive class in off-road racing.

If you are a racer and haven’t driven one of these vehicles thinking they are below you, you are making a big mistake. Get in one and try it. It is the most fun per dollar you will have hands down. With the perfect storm of affordability, speed, durability and factory support the UTV class has massively frown in the last five years. Although the Baja 1000 lack the car count that The Mint 400 and UTV World Championship get, it is the race everybody wants to win and the field is stacked with vetran racers.

Wes miller starts first off the line in UTV Pro Turbo after a hard fought Baja 400 which determines start position for Baja 1000. Behind him is Marc Burnett, Scott Trafton, Bradon Schuler, UTV and former ATV champion Wayne Matlock, Edgar Garcia Leonin, and Baja 500 winner Craig Scanlon followed by Jose Juarez. The pack behind them is staked with gamers including Matthew Burroughs, Justin Lambert, Brett Comiskey, Christine GZ, Jason Murry and Tony Riggs. In UTV Pro NA young charger Kaden Wells starts on the pole in his class followed by Joe Bolton, John Entwistle, T. Bradley Millner, Christopher Boyle, and Jim Daniels. Lurking in the back is the now notorious Kristen Matlock. She is unbelievably fast even from the back and will be on the offense all race. Polaris RZR, Can-Am, Yamaha, Textron and the newly formed Speed UTV are all looking for glory and vehicle platform validation. Undoubtedly Kawaskai and Honda will soon be joining the party as both SCORE and The Mint 400 will be allowing select aftermarket turbos.

The Return of the FORD Bronco

The only 4 Wheel drive vehicle to ever win the Baja 1000 overall was in 1969 piloted by off-road legend Rod Hall.

FORD announced the return of the FORD Bronco to off-road racing ahead of the production vehicle launch in 2021. The Geiser Brothers built race truck will carry Rod Hall’s 69 number in tribute to his legacy as well as be piloted by his grand daughter Shelby Hall and a team of off-road and NASCAR luminaries including Cameron Steel, Johnny Campbell, Steve Olliges, Jason Schear, Brad Lovell and Curt LeDuc. The effort is a fitting tribute to the late Rod Hall and his impact on global off-road culture. Now just like Rod always said “ You must first finish to finish first!”

The Return of The Baja Boot

The infamous Baja Boot will make its return to Baja with a newly updated platform from (SCG) Scuderia Cameron Glickenhaus.

Once piloted by Steve McQueen raced the original Boot back in the ‘60’s, the new version designed to be street-legal and as race-ready. With a five-liter V8 in and 22 inches of suspension travel “The Baja Boot” could not only finish but potentially beat some larger class vehicles all with the funky classical style of the original.

With 26 classes of vehicles there will be epic battles in every class.

Come down to Ensenada and witness the battles first hand under the warm days and cool nights of Baja or watch online and on social media. It’s guaranteed to be 20+ hours of insane racing action!