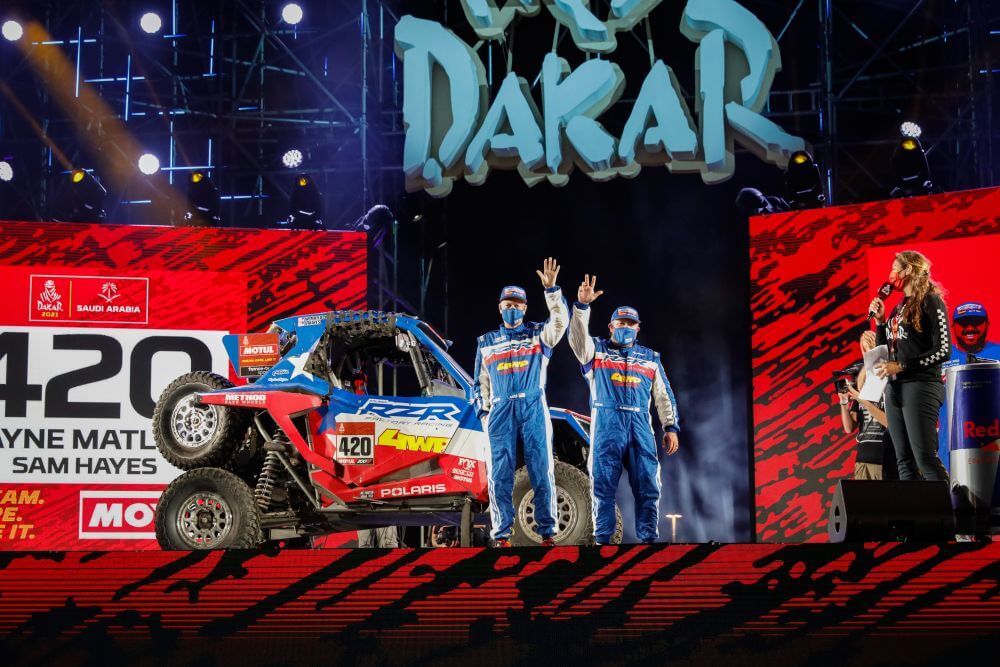 Prologue & Podium: 2020 Was One for the History Books

With the World in Lockdown for Nearly a Year, This Prologue Could Mark the Beginning of the End.

With the event sanitized and hermetically sealed, teams set off for their first challenge (in a vehicle at least) to find their starting order and kick off a second year in Saudi Arabia. After several idle days in quarantine, at least two [read: five] PCR tests and a mad rush to prime their vessels and state of mind, the bikes, cars, quads and camas headed 118 kilometers out from Jeddah to outer space for Special Stage Zero. The landscape surrounding Saudi’s most progressive city is a mix between the highlands of California and the moon. Barren and greyish brown with small, rolling sandhills crawling over each other creating berms and sharp ledges that welcomed competitors with open arms and a devious smile. We don’t envy those who had to run the course when the sun was at its highest, and brightest. The glimmer removes a desired contrast to detect upcoming dangers. However, this is familiar territory for the veterans. It’s just one of the many challenges which the seasoned athletes barely notice and the novice can find unhinging.

Now legendary 2020 Dakar Champion Ricky Brabec (#1, Monster Energy Honda) likens these southern desert landscapes to his home in Hesperia. Which explains why he took the stage with such ease. He joked that he had hoped to finish a little further back in the pack because, as most racers recall, leading it – over untainted terrain – can cause its own set of issues. But he was relieved to hear SS1 will offer more familiar roadways, a grid of hard packed dirt with some rocky sections and innumerable junctions. This doesn’t mean he’ll be taking it easy, because strong contenders, like teammate Joan Barreda Bort (#88 Monster Energy Honda) and KTM Factory rookie Daniel Sanders (#21), will be buzzing around him like flies on food. Whether or not he’ll be rested and ready by the morning is up to Brabec, but it won’t be long now until we see for ourselves.

“Tomorrow we wake up really early, 4am is start time for the first Moto… That would be me. [I’m] very fortunate to win the prologue and tomorrow starts the journey.” –Ricky Brabec #1, Monster Energy Honda 2021 Ride
All in all, the Americans faired well at the inaugural trial of the 43rd Edition of this most infamous event – even more so now as it navigates COVID’s tricky waters. Despite the long, surprisingly rigorous, trek from the States, contenders like Andrew Short (#7), now with Monster Energy Yamaha, ended the day in the 6th position, while comrade Skyler Howes (#9, BAS Dakar KTM) took a solid 13th in the standings.

In UTVs, Seth Quintero and co-Pilot Dennis Zenz (#383 Red Bull Off-Road) nabbed an impressive second place on the proverbial podium, as fellow countryman Austin Jones and his navigator, Gustavo Gugelmin (#408 Monster Energy Can-Am) are hot on their tails on the next step down. A flat tire early on kept desert racing duo Wayne Matlock and Sam Hayes (#420, Polaris RZR Factory Racing) from reaching their full potential. While wife, and often rival, Kristen Matlock, led by Max Eddy Jr. (#409, Polaris RZR Factory Racing) settled nicely into the 23rd seat. She’s still becoming accustomed to her rally-style rig, but her team is confident Matlock, both in fact, will find the rhythm quickly.

The big shock of the Prologue, as the ASO said in their daily press release, was that “hell froze over in the truck category as Kamaz proved unable to place a single driver in the top 10.” Although the fresh-faced Polaris-branded MAN machine wasn’t quite prepared to squeeze past the competition into the Winner’s Circle, it did fly through the mini dunes in a blaze of star-spangled glory. Even the two Spaniards and a vivacious man from Portugal at the helm would be proud to represent ‘Merica in that life-sized Matchbox truck. Alberto Herrero, Nuno Fojo and Juan Carlos Macho del Elmo (#521, Polaris RZR Factory Racing) went to bed happy with P-2 in their subclass and 22nd among all the other purpose-built garbage haulers.
“First, I was very impressed by the way the truck handles the terrain. Especially the suspension, and its high capacity for absorption. The second thing was its brakes – considering the truck is 10.2 tons (that you are dragging). I was also amazed at how far you can see because you’re so elevated off the ground. In fact, it helps with the navigation. I am actually surprised in a good way. It was a fantastic time.” Nuno Fojo #521, Polaris RZR Factory Co-Driver/Mechanic

It wouldn’t be right to leave out mention of Nassir Al-Attiyah’s 36th career stage triumph today, which will surely be outdone before the end of the competition – or even the end of the coming stage! Often a favorite to win, Al-Attiyah and co-pilot Mathieu Baumel (#301, Toyota Hilux Overdrive) seemed to take the win with ease, while some of their peers suffered, slowly. Previous year’s victors Carlos Sainz and Lucas Cruz (#300, X-Raid Mini JWC) dealt with the agony of a gradually deflating tire. And others just couldn’t keep the dust out of their faces long enough to catch up. But all hope is not lost. There are still 12 days and 11 stages left – a daunting but worthwhile task ahead, chasing the most formidable motorsports figures in the world. And it’s just the beginning.

KEY NOTES
Ø Liaison > 118 km – Special > 11 km; 7,646 km Total Racecourse Loop
Ø 498 Competitors; 286 Vehicles
Ø This appetizer will give participants the chance to ease into a competitive mindset. The race will take the competitors about 30 kilometers away from King Abdullah Stadium and feature a handful of sandy tracks where the temptation to just slide around the course will be hard to resist. Most importantly, the classification will establish a safe starting order for the next stage, with everyone right where they belong.

Ø New for bikes in 2021. Intended to further increase safety standards for the motorbikes, a Dakar committee introduced a new hurdle for teams to manage over the eleven stages. The ASO is restricting rear tire changes to only six throughout the entire rally, hoping that this will force riders to slow their pace in order to maintain the integrity of their rubber. Perhaps the new regulation is a bit of a disappointment for the pros who live to open up the throttle. But as horsepower and performance increases with every new model of motorbike, the organization has been concerned these faster speeds could lead the more daring to, likewise, faster – if not more – collisions. A great machine is confidence-inspiring, which can lead to complacency in some people, so with safety being the Amaury Sports Organisation’s main concern, it’s no surprise they would look for a means to pump the brakes on the rising momento in this class. Undoubtedly this is a response to last year’s tragedy losing Portuguese Hero Factory racer Paolo Gonçalves in the seventh stageØ “Stat of the Day” – 41-year-old Kris Meeke already had a long and illustrious rally career behind him, but he wasted no time in proving his worth in the Dakar. The Brit claimed his maiden stage win in his debut in the greatest rally on Earth, dominating the lightweight vehicle category, where experience does not seem to be the only factor. The runner-up, 18-year-old rookie Seth Quintero, is young enough to be his son! One may be 23 years older than the other, but only two seconds separate the two men after the prologue.

Quotes:
First Place Bikes, Ricky Brabec #1, Monster Energy Honda Team 2021: “Good feeling early on today with a short prologue. Looking to keep this momentum until the end even though this position is not ideal this early on.”
Third Place Cars, Yazeed Al-Rajhi #303, Toyota Hilux Overdrive: “We didn’t throw caution to the wind.” The hero of the Saudi nation, fourth in last year’s edition, conceded eight seconds to Nasser Al-Attiyah and finished third on the day. “Everything went well. We didn’t throw caution to the wind because we needed to avoid getting into trouble. It’s just a prologue, but we ended up quite high.”
Second Place SSV, Seth Quintero #383, Red Bull Off-Road Team Rally: “Starting things off right with a P2 today in SSV and T3, off first place by two seconds. Excited to get back out there tomorrow and do battle! So blessed to be where I am today thank you everyone for the support.”