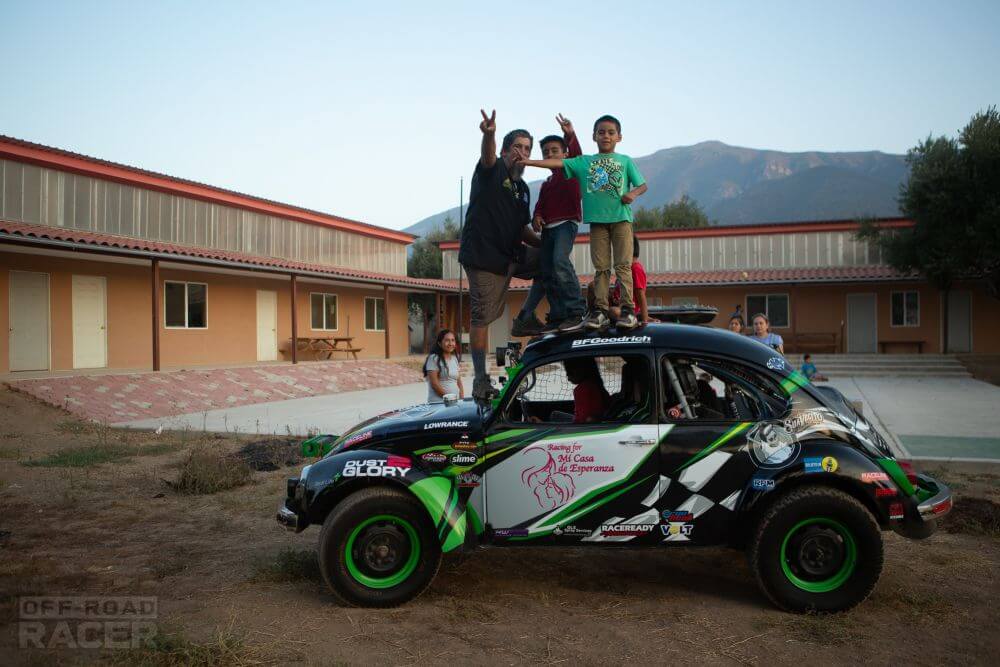 If you’re reading this you either race or dream about racing, but why? Most of us do it for fun, or simply because we have the opportunity to do so, maybe for the challenge or maybe you are simply too bored and looking for trouble somehow. There’s nothing wrong with that of course, we make our own decisions on what route we go, but what if you choose to do some good? To race for the hope of people in despair? That changes everything, even the meaning of off-road racing itself. We bring you one of those stories that sadly isn’t as common in the off-road community as it maybe should be.

This is Dennis Hollenbeck, a Christian missionary who was born in Texas but life sent him to Southern California at a young age. While he was working at UPS he felt the need to do something different, and during a trip to Baja with his Christian missionary he found out that the place he was looking for was just right outside the border. “They were looking for people and I was looking for a place” he remembers and for 25 years now Dennis has been living right at the heart of off-road racing, Ensenada.

Growing up in Texas Dennis loved to go with his dad to the racetrack as a fan of motorsports in general, NASCAR, F1, you name it. So when he found out about Baja racing he was instantly hooked, “When you go to a Baja race, and find yourself in a dry riverbed and see race cars at full speed just few feet away from you, I mean how you can’t be not hooked?” Dennis continued, “We became instant fans, we went camping to watch the races, racing weekends were a holiday like thanksgiving” said Dennis when we asked about how he got into off-road.

That was just the beginning. While living in Ensenada, Dennis bought a beaten old Volkswagen beetle because he simply didn’t enjoy driving his big truck through town, and he needed something smaller. A friend of his saw him putting a new in engine and jokingly told Dennis “might as well turn it into a Class 11”. With that idea in mind, by 2011 Dennis started to build his race machine later named “Vochito” by the kids of Casa Esperanza.

Dennis needed a meaningful purpose to race, he didn’t want to be just another team. He lives day by day asking himself how to help others so if he chose to race, it will need to be for a good reason. If you have seen the Baja racing documentary Dust to Glory, (which we assume you have, if not please do us a favor and go watch it preferably after you finish reading this) then you know about Malcolm Smith and his work with the orphaned children in San Matias. Dennis, after watching the movie took that as inspiration to race with the cause of helping women and children in difficult situations at Casa Esperanza, a place he was already supporting with his missionary work he started after moving to Mexico.

2 years later the 2013 Baja 1000. It was Dennis and Vochito’s first race with their newly formed H12:ONE Racing team. Dennis felt confident, two crates of spare parts in his chase vehicle and he believed he had it in his pocket. Green flag drops and off they go. He tells the story “We have a rough turn by RM69, every time we are going through that section I tell my co-driver to hold his breath, once we pass through we relax… because that’s how far we made it right when the transmission blew during that race. I felt like the new kid in school with new uniform, new books and ready for anything and the first thing that happens is the bully beating the crap out of me”. A friendly reminder that Baja doesn’t care why you race, it will do anything to break your spirit. That was the first experience Dennis had behind the steering wheel in Baja. It was a hard lesson that happens to basically everyone that challenges Baja for the very first time.

Next season in 2014 started with some good news and some bad. The bad news is that they finished last in the first race of the season, the San Felipe 250. The good news is that only two class11 teams finished so Dennis and his team managed to get a respected 2nd place which renewed their spirits completely, it let them know that the sun always comes up tomorrow and with that in mind they went for it at the Baja 1000 which was a peninsula run edition.

This was the first peninsula run for them, a whole different animal than anything else they had experienced, the logistics were as good as they could have been, “I didn’t know what I was doing!” said Dennis. Race day came and after 24 long hours and in first place just 10 miles before the finish line, Dennis could taste the victory already…. but then Baja happens. “We were just 10 miles from the finish line, we can see La Paz from here driving this section called Los Filos, a downhill rock-step section, and here I am co-driving after 20 hours being awake thinking of my victory speech when my driver started telling me that something felt wrong in the steering, I unstrapped myself, looked through the already gone windshield, and I just see the brake pad dragging into the dirt, we lost the whole wheel assembly hitting those rocks! We drove for 3 miles on three wheels until we reached a hill, we couldn’t make it to the top, I knew that was the end of the race.” They didn’t give up though, they got it fixed and managed to cross the finish line after the race time limit was already over. “A lot of people waited for us at the finish line, Roger Norman gave us a ceremonial finish which felt like a good pat on the back; During the awards ceremony they called us to give us an honorary mention and a trophy but we were eating tacos next door, we never thought they will mention us since we didn’t make in on time (laughs)”.

Fast forward to 2017, Dennis finally managed to get the SCORE Class11 Championship after getting 2nd place in the Baja 1000, again in the peninsula format. Then last year, in 2019 the team H12:1 led by Dennis finally took home the long-awaited Baja 1000 1st place after a ridiculous number of breakdowns and issues they had during the race. Dennis even rolled his race car for the first time there. “We kept digging and digging and going and going until we made it to the finish line, I thought we didn’t make it on time after losing time with the rollover.” But flags dropped, champagne started to spray and the announcement of the Baja 1000 first place was finally achieved.

Before and after every race, Dennis takes “Vochito” to these kids and families that mean everything to Dennis. His two adopted daughters are living proof if you don’t believe me. Some of the stories that come to Casa Esperanza are simply heartbreaking, these kids have gone through a lot and still have a difficult time ahead, this is why Dennis bring the car to teach them that life is like a race and it’s different for everybody. Some get to race their lives in unlimited categories with nothing to worry about, but these kids living in hard conditions have to live like a Class11 races, on the hardest path. It’s a lot of suffering but at the end it can finish in victory if you maintain yourself and above everything, don’t give up; also teaching them that sometimes even when you give everything that doesn’t mean that you will win, failure is part of life and racing.

When we were there doing the interview we could understand what Dennis does is something special, they called him Tio Dennis, uncle in english, and they call vochito their friend. We can’t deny the charming fact the effect of an “old VW bug” can have on the children especially in Baja. “I don’t know if I would like to race in another category, I don’t know if the kids would like if I bring another car, vochito is their friend, they even draw it during art classes. I tried to be careful, I don’t want to give them a false sense of what this car is, sometimes I just tell them that is simply a piece of junk metal with an engine in it, nothing else; but they keep creating a connection with it, for them this is their big brother that goes to the desert to beat up the bully for them.”

Having the hope of these kids on his back during the races is not easy of course. Win or lose, he always brings the car to the kids and sometimes without any trophy, he then has to explain sometimes it just wasn’t your time.

And this is what off-road racing is all about, we all are racing through life going through hard obstacles that might break you in an instant, you can find in many situations total loneliness, and sometimes you can have long fast stretches going as fast as you can. All of these experiences gives us life lessons but Dennis goes further bringing this knowledge to kids that struggle in life.

Like Dennis there are more teams trying to make a difference, Desert Dingos Class11 races Diabetes awareness, Cameron Steele and his crew bring amazing support to Rancho Santa Martha, another house for orphaned children in Baja. Green Army led by Justin Davis, and Robert Acer have also come to Casa Esperanza to help Dennis as well. These are just some examples of people making a difference, if a Class11 budget can make a difference, imagine what it could be if more teams with bigger budgets could do.

Casa Esperanza currently has around 10 mothers that together bring between 20 and 40 kids that fully depend on people like Dennis bringing support and raising funds for them, but it’s still not enough. Their school is in need for new books and supplies which would enable the kids to get the best education possible, all while like the rest of us dealing with the Covid-19 crisis.

Casa Esperanza website
For assistance and other options you can contact Gabby or Kathy at micasaesperanza@gmail.com or 909-753-8239.
All donations are tax deductible and 100% go to Casa Esperanza.
US 501(c)3 non-profit status.