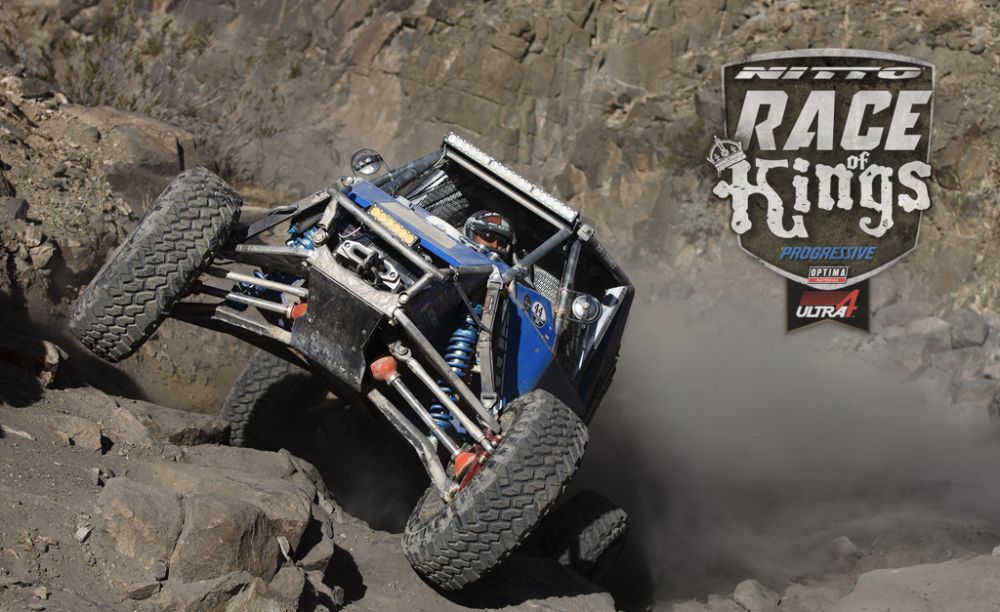 February 6, 2022 (Johnson Valley, CA) – Gomez Brothers Racing has come so close to winning King of the Hammers so many times.  It was not a matter of if, but when.  And not just a matter of when, but which Gomez. Raul, his brothers Marcos and JP, and his son Darian have been fan favorites for years for their no-holds-barred driving style. While popular with fans, that go for broke driving style often left them short of the win. Last year JP finished second and Raul finished third at King of the Hammers.  The year before, Marcos was leading the race with just a few miles to go before breaking an a-arm on his suspension.

Raul Gomez piloted a brand-new UFO Fabrication buggy with only 20 miles on it prior to the race.  Normally the lack of testing would be a detriment, but it didn’t deter Raul. His backup plan was to compete in his race-legal prerunner, but when the new buggy arrived on the lakebed, Raul let car builder Joe Thompson drive the extra buggy in the race. Thompson, whose UFO Fabrication shop has built all of the Gomez Brothers Racing buggies, made the most of the opportunity with a 14th place finish.

Three-time winner Jason Scherer and his co-driver Jason Berger naturally wanted the win, but were still pleased with their second-place finish in their Ford Bronco. “I think this was the most fun I’ve ever had racing,” Scherer revealed. “It’s always hard to come in second and say it was the best race you ever had, but that was real racing out there.” Scherer started on the first row next to Bryan Croft and was leading for the first half of the race before Raul Gomez passed him at Race Mile 134. Gomez ended up finishing the race in just under seven hours, fifteen minutes ahead of Scherer.

2020 KOH winner Josh Blyler of Big B Motorsports rounded out the podium in his Miller Motorsports Jeep. “We had a great day, but I feel really bad for my dad,” Blyler added.  “He was kicking our ass the whole day until we found him broke down out in the desert. That sucks, I really wanted him to kill it.”  Father and son Rusty and Josh Blyler qualified 20th and 21st, starting the race side-by-side.  On the subject of side-by-sides, Cody Miller made history as the first UTV driver to finish in the top 10 in the unlimited Race of Kings in his Can-Am Maverick X3, besting Kyle Chaney’s 11th place finish from last year. “We had a clean day, the course is just that hard,” Miller confessed at the finish line.

The Nitto Race of Kings (formerly named King of the Hammers) has a reputation as the most difficult one-day off-road race in the world, pushing racer and machine to their breaking point, and beyond.  Attrition was as high as ever in 2022, with only 44 of the 101 competitors reaching the finish line within the 14-hour time limit.  “This race was rough, but I don’t think it should be easy,” Jason Scherer said after crossing the finish line. “This is a challenge and I don’t want the Hammers to be easy. I want you to earn it. I’m glad that it’s the way it is.” There were numerous lead changes, mechanical carnage, and high drama as the race unfolded over 227 miles of unforgiving terrain in Johnson Valley, one of the largest Off Highway Vehicle (OHV) area in the United States. In the end, Raul Gomez took home a $67,000 pay check and joined the elite ranks of King of the Hammers winners.

The Nitto Race of Kings Powered by OPTIMA Batteries is the grand finale of nine days of racing and live music in Johnson Valley for King of the Hammers in front of tens of thousands of cheering fans.  Millions more online viewers tune in each day for unparalleled life coverage direct from the course. The week started with the Toyo Tires Desert Challenge Presented by Monster Energy, the Baja Jerky Class 11 Showdown Presented by EMPI, the Holley EFi Shootout Presented by King Shocks and Action Sports Canopies.  From there, three days of qualifying led into the Can-Am UTV Hammers Championship Presented by Progressive, the 4WP Every Man Challenge, and the Nitto Race of Kings Powered by OPTIMA Batteries.  King of the Hammers races combine punishing desert terrain and the huge boulders of the notorious Hammer trails.  The Race of Kings runs the same two laps as the UTV and EMC races, but ups the ante with a third lap adding even harder trails with ominous names such as King’s Veto and Nightmare.