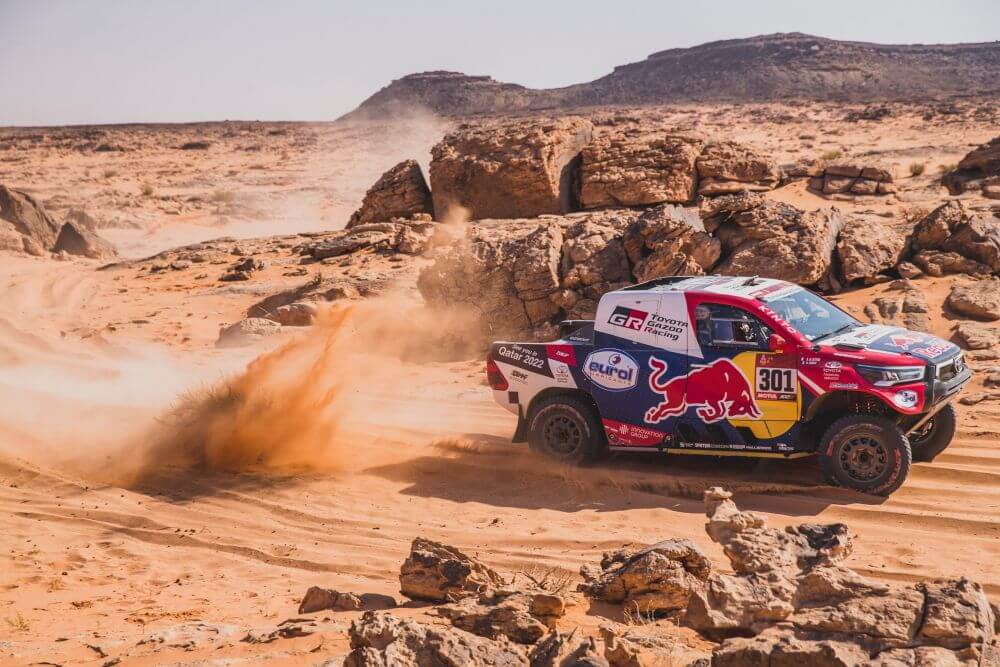 January 11, 2021
Neom, Saudi Arabia
The second part of the Marathon Stage at the 2021 Dakar Rally put the convoy’s mechanical skills to the test. Being separated from their support crews for the night, it was up to the Dakar competitors to make any repairs themselves. Let’s find out who managed to keep their motor running for the entire 1,500-kilometre Marathon Stage…

Things were looking bleak for two-time Dakar winner Toby Price when he pulled into the Marathon Stage bivouac. He had lost the overall lead of the bike race, but that wasn’t the biggest issue on his mind. A massive gash had appeared in his rear tyre and with no spares authorised, this could be the end of his race.

But this is Price, the guy who won the Dakar in 2019 while riding the majority of the rally with a broken bone and a loose screw in his wrist. The Australian fixed his back wheel with cable ties and duct tape, and it miraculously held out for the entire 375km of timed special stage – plus the 334km liaison route – between Sakaka and Neom. In fact, Price led the stage for most of the day.

“I tried to fix the issue as much as I could. By the time I got to the refuel at 229km I was down to one cable tie left on my rear tyre, the rest had come off. I did my best to keep momentum, not accelerate hard and ride smart.” – Toby Price

“It looks like my bike is beat up, but if you saw the terrain it’s been through it’s really not that bad. Two days with the same tyres and wheels and no service.” – Sam Sunderland

Rookie Daniel Sanders saw his bike stand up to the punishment, but his body ended up on the receiving end of a blow from the course when he fell in the dunes and split open his chin.

“I’m glad I could get to the finish line with my bike. We’ll fix everything up tonight and get ready for the next few days. I didn’t break any bones when I crashed yesterday, but the cut needed some stitches.” – Daniel Sanders

A fifth stage victory of the 2021 Dakar has moved Nasser Al-Attiyah even closer to the overall lead in the car race. A successful Marathon Stage gives the Qatari the perfect platform to attack on the final four days of the rally. Today’s victory was Al-Attiyah’s 40th stage win of his Dakar career, making him the only competitor in the rally’s history to win at least one stage at 14 consecutive editions.

“We kept the car in one piece which is good because in some places we were pushing a lot. We got three minutes back on Stéphane today and we will keep going day by day.” – Nasser Al-Attiyah

13-time Dakar winner Stéphane Peterhansel still leads, but his advantage has been cut to less than five minutes over Al-Attiyah.

“In the last 50km I did one or two mistakes. I didn’t follow the information of my co-driver Edouard and we had to turn around. Here we probably lost one or two minutes. At the end we’re still in the fight.” – Stéphane Peterhansel

Runner-up on the stage Carlos Sainz was joined in the Top 5 by Cyril Despres who celebrated his best result at this Dakar.

“It was another step ahead for us today on this beautiful stage. Honestly, one of the top three most beautiful stages on the last 20 Dakars I have done.” – Cyril Despres

Mechanical gremlins struck again for Sébastien Loeb who has left out in the desert for a number of hours trying to repair his Hunter BRX. It’s was mixed experience at the 2021 Dakar for Loeb in a fresh car that has now finished after his retirement on Stage Eight

18-year-old Seth Quintero has taken a step closer to the lead of the Lightweight Vehicles race during the Marathon Stage. At the Rest Day the rookie was third overall, but two stages later he is second behind new race leader Austin Jones.

“I think we might have moved up a spot in the general ranking, might be sitting P2 now. It’s going to be a long four days but hopefully we can be there at the end.” – Seth Quintero

The news was not so good for Quintero’s fellow Red Bull Off-Road Junior Team driver Cristina Gutiérrez. The winner on the opening day was prevented from starting Stage Eight due to gearbox trouble. Gutiérrez will rejoin the rally tomorrow in the Dakar Experience category

Elsewhere in the Lightweight Vehicles category there was another stage win for Chaleco López while debutant Mattias Ekström is another now in the Dakar Experience.

Winning the stage for Team Kamaz Master was Anton Shibalov, leading home yet another 1-2-3 result for the Russians. Dmitry Sotnikov continues to fly the flag for Kamaz at the front of the truck race.

Stage Eight also saw a best result of the rally so far for Ignacio Casale, the two-time Dakar quad race winner who has returned to the truck contest and finished in the Top 5 today.

Tomorrow’s Stage Nine sees the convoy take on a 465-kilometre loop around the Neom bivouac against the clock. The racing starts on the shore of the Red Sea before arriving to a characteristic mix of sandy sections and fast tracks.

You’re receiving this newsletter because you’re subscribed to the Red Bull Desert Wings newsletter, our distribution service for inside stories covering our Red Bull rally-raid athletes.–