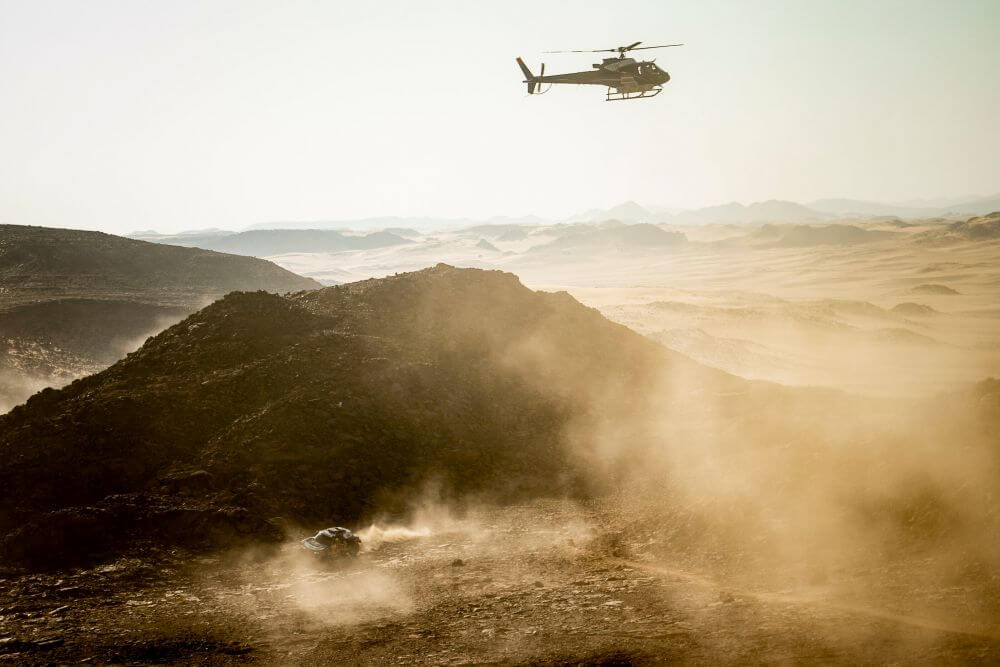 January 5, 2021
Wadi Ad-Dawasir, Saudi Arabia
The 2021 Dakar Rally has taken its first trip to the Empty Quarter desert and the dunes had a big say in the general classification. Find out who managed to stay on track and which drivers got lost on Stage Three…

After winning the Prologue and Stage Two, Nasser Al-Attiyah set the fastest time for the third time in four days. Despite opening the road, the three-time Dakar winner and co-driver Mathieu Baumel took a stage win that lifts them to second in the general classification.

“To open the stage and win is always very satisfying.” – Nasser Al-Attiyah

Third place on the stage was enough for Stéphane Peterhansel to maintain his overall lead in the car race. The gap between Peterhansel and Al-Attiyah now stands at just over five minutes.

“This was a complete Dakar stage with a big mix of everything.” – Stéphane Peterhansel

Finishing between Al-Attiyah and Peterhansel on Stage Three was Henk Lategan, a first podium result for the South African.

After a rocky start to the rally things are improving for nine-time WRC champion Sébastien Loeb. A sixth place finish on the stage has elevated the Frenchman to sixth place overall.

“We did a good job. Things were good and the car worked really well.” – Sébastien Loeb

Elsewhere in the car race there was a difficult day for reigning champion Carlos Sainz. A navigation mistake cost him over 30 minutes and has seen him slip back to fourth overall.

“It wasn’t a smooth stage for us, today we lost more than half an hour. Now we must keep going, get our heads down and try to get that time back” – Carlos Sainz

Cyril Despres, Giniel de Villiers and Kuba Przygoński also faced challenges on the stage before successfully crossing the finish line and making their way back to the bivouac.

“It’s like a yo-yo at the moment, I’m either right at the front or at the back.” – Toby Price

There was also another strong showing from Dakar debutant Daniel Sanders who took his third Top 10 result of the rally.

“I had a few crashes in the dunes and some navigation errors in the canyons. All in all things weren’t too bad though.” – Daniel Sanders

Chaleco López has extended his lead in the Lightweight Vehicles category to over six minutes thanks to a stage win today. López and co-driver Juan Pablo Latrach Vinagre were able to navigate through the stage smoother than any of their rivals could manage.

“We’ve ended up with a good result and I’m really proud of the whole Red Bull Off-Road Junior Team for the job we have done so far.” – Seth Quintero

Three-time Race of Champions winner Mattias Ekström is currently 14th in the general classification of the Lightweight Vehicles category on his debut Dakar drive.

“Navigation has been a big challenge at this Dakar.” – Dmitry Sotnikov

Tomorrow takes the Dakar convoy to Riyadh. Before arriving in the Saudi Arabian capital the competitors must cover 856km, with 337km of the total distance against the clock.