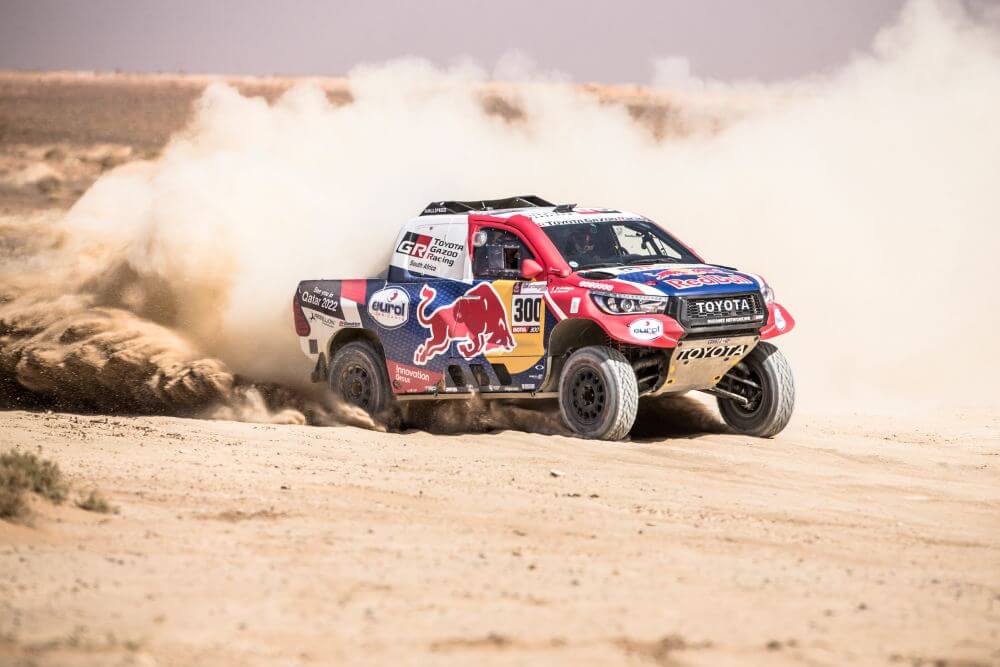 In January 2020, the Dakar Rally will dive headfirst into the 30th host country of its illustrious history. After three decades in Africa and 11 editions in South America, the toughest rally on the planet is coming to Saudi Arabia.

A vast expanse of desert as well as a mosaic of other challenging terrains await the world’s best offroad racers. Speed and navigational skills will be put to the test for two weeks, from the Red Sea to the Arabian Gulf. 250-metre high dunes must be successfully traversed by any competitor hoping to cross the finish line.

Reigning Dakar car champion Nasser Al-Attiyah (QAT) is a frontrunner for success in Saudi Arabia. Alongside co-driver Matthieu Baumel (FRA) and at the wheel of his Toyota Hilux, Al-Attiyah has been on great form during recent years. A dune-driving natural, it’s hard not to see the Qatari challenging for a fourth Dakar title in January.

“There’s so many good drivers out there, the only way to stay in front is to be at your best every day of the rally.” – Nasser Al-Attiyah

Also taking their place on the start line in Jeddah on January 5 will be a pair of all-new MINI John Cooper Works Buggies. The husband and wife team of Stéphane (FRA) and Andrea Peterhansel (GER) will take charge of one buggy, while Carlos Sainz (ESP) and Lucas Cruz (ESP) will race the other.

Can Stéphane win his 14th Dakar title, and his first while racing alongside Andrea? The fact that the married couple won the 2019 FIA World Cup for Cross-Country Rallies suggests they have a great chance of more success in Saudi Arabia.

“For us it will be a really interesting race in Saudi Arabia. I only know a little bit of the country, from a motorcycle race I did a long time ago. I remember beautiful landscapes.”
– Stéphane Peterhansel

Among the Peterhansels’ biggest challengers for the win will be their team-mates Sainz (ESP) and his co-driver Cruz (ESP). Sainz himself is a two-time winner of the Dakar car race and one of the most recognisable faces in the bivouac.

Further contenders for car class glory include Kuba Przygonski (POL) and co-driver Timo Gottschalk (GER). The pair finished the year as runners-up in the FIA World Cup for Cross Country Bajas and have a powerful MINI John Cooper Works Rally at their disposal.

In the bike race it’s all eyes on the Red Bull KTM Factory Team to see if their winning run can extend to a third region. The team are coming to Saudi Arabia with the aim of winning an unprecedented 19th consecutive victory at rally-raid’s most prestigious event.

They have three bikers in their squad who have already won the Dakar: Toby Price (AUS) in 2016 and 2019, Sam Sunderland (GBR) in 2017 and Matthias Walkner (AUT) in 2018. While Price is the reigning Dakar champion, Sunderland has been busy this season and picked up the 2019 FIM Cross-Country Rallies World Championship.

“The goal for 2020 is the same as always. We always want to finish on that top step at whatever race we enter, but especially at the Dakar.” – Toby Price

“I’m very excited, I think the Dakar needed a change. Of course we all enjoyed South America a lot, but it’s always good to discover something new.” – Laia Sanz

It’s hard to imagine a new route causing much trouble for serial truck race winners Team Kamaz Master. Of the 11 editions of the Dakar to take place in South America, this Russian team won nine of them. They’ll be looking to maintain those standards in the Middle East.

“The terrain could be similar to African Dakars – not quite the amount of high dunes like in Peru, but a lot of rocky terrain like in Morocco. We are prepared for a hard route.” – Eduard Nikolaev

Defending his side-by-side title in Saudi Arabia will be Chaleco Lopez (CHI). The Chilean took the category at his first attempt and is now out to make it back-to-back wins.

“In 2020 things will be different, the geography will change. However, I think the essence of the Dakar will remain the same.” – Chaleco Lopez

After trying out the side-by-side race, Ignacio Casale (CHI) is back in the quad bike category. The two-time Dakar quad champion has been motivated to chase a third title by the rally’s switch of location, but will face stiff competition from rivals such as Fahad Al Musallam (KUW).

“It’s a shame for South America that it loses a tremendous event, but the move to Saudi Arabia has given me an injection of extra motivation.” – Ignacio Casale

It feels like the entire Dakar Rally bivouac has been given a shot of extra motivation ahead of the 2020 edition in Saudi Arabia. The offroad action gets started on Sunday, January 5 in Jeddah and finishes 9,000km later on Friday, January 17 in Al-Qiddiya.