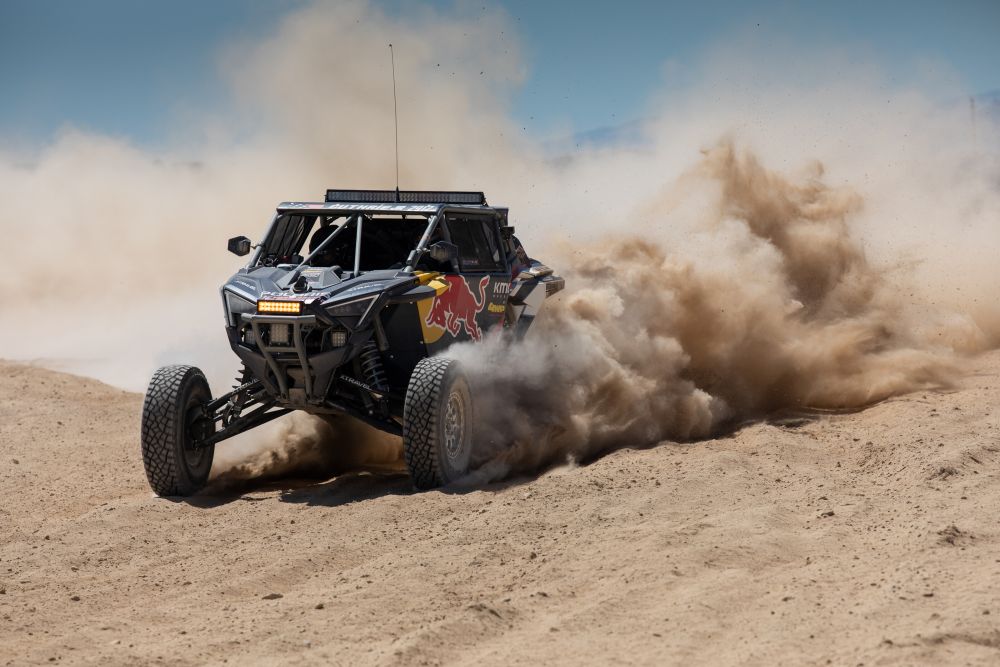 All four Red Bull Off-Road Junior Team drivers raced a wild 2022 Vegas to Reno, plus a special guest joined them for the ride. Americans Mitch Guthrie Jr. and Seth Quintero were joined by Europeans Guillaume De Mevius and Cristina Gutiérrez as well as Dani Sordo for the latest round of the Best in the Desert series.
Heavy rainfall in Nevada during the week leading up to the race forced organisers into some last-minute modifications. Specifically, a new start line was picked and a neutralisation zone was established in the middle of the course. Despite the shake-up, there was still just shy of 500 miles of gnarly off-road action to contend with.

Mitch Guthrie Jr. qualified his Polaris RZR Pro R in 2nd place for Friday’s UTV Trophy Unlimited race. The 25-year-old carried on his pace from April’s Silver State 300 on the route out of Vegas as he kept up with the very best in his class. Guthrie Jr. was challenging for the win as the race crossed the 350 mile mark and he put the hammer down to take 1st in class at the finish line.

“After a small issue we had a perfect run to the finish, making passes and ending up 1st in class and 2nd UTV across the finish line.” – Mitch Guthrie Jr.

Seth Quintero was back at the race that he had recorded back-to-back victories at in 2019 and 2020. Racing his Polaris RZR in the UTV Turbo Pro category, the 19-year-old clocked the 18th fastest time in the qualification round. When the real race got underway on Friday, Seth wasted no time charging through the field. He reached the midway neutralisation zone in the podium positions before eventually crossing the finish line in 7th place in the UTV Turbo Pro class and in the Top 10 UTVs overall, after having a great battle with Dakar rival Chaleco Lopez along the way. Quintero’s next race will see him join his team-mates at October’s Rallye du Maroc.

“Excited for these next few months as we have multiple different types of racing disciplines we will be doing and I’m all in for the adventure!” – Seth Quintero
Download the 2022 Vegas to Reno Newscut from the Red Bull Content Pool here

This was a first attempt at a Best in the Desert race for Guillaume De Meviusand co-driver François Cazalet. The duo qualified their OT3 (making its US debut) in 4th for the UTV Trophy Unlimited class and then amazingly led their category at the neutralisation zone. Ultimately, the Vegas to Reno adventure ended prematurely for De Mevius, but the Dakar stage winner will have picked up plenty of invaluable racing experience from his trip to Nevada.

The fourth Red Bull Off-Road Junior Team crew racing this year’s Vegas to Reno was Cristina Gutiérrez and co-driver Pablo Moreno. The plan was for the 2021 FIA World Cup for Cross-Country Rallies champion Gutiérrez to hand over the controls of her OT3 to WRC regular Dani Sordo at the halfway point of the race. Gutiérrez brought her OT3 through the first part of the race in the Top 10 of the UTV Trophy Unlimited class. Then Sordo took over for the second half of the race, an encouraging start saw him climb the rankings before eventually being forced to retire before reaching the finish line.

“It was a shame that with 250km to go an electrical problem left us without a battery while we were running 4th in our category.” – Cristina Gutiérrez

This was the first time all four Red Bull Off-Road Junior Team drivers had competed together in the United States. It is always the aim of the team to give talented and hungry drivers the chance to test themselves at prestigious races all over the world. Up next will be a return to the Rallye du Maroc in October as attention returns to the World Rally Raid Championship and preparation for the 2023 Dakar Rally.
Vegas to Reno UTV Trophy Unlimited Top 3 (Provisional Results)
1. M. Guthrie Jr. Polaris 09:14:17
2.  D. Fisher Can-Am 09:29:58
3. T. Leighton Can-Am 09:40:35