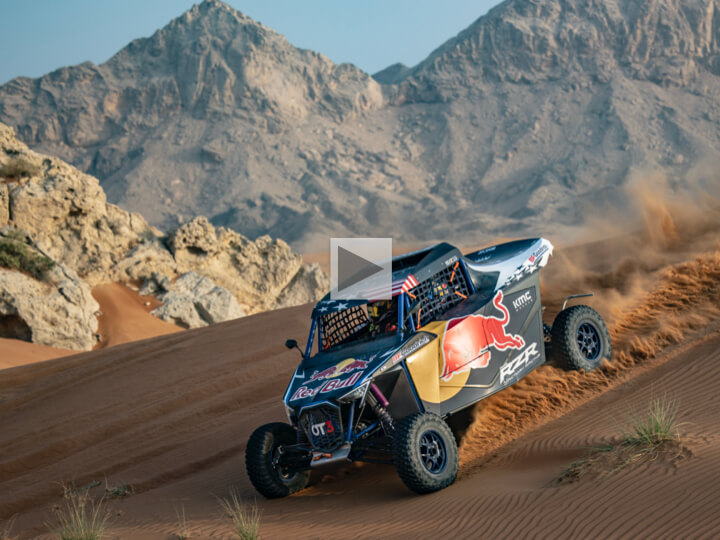 Red Bull Off-Road Junior Team return to Dakar with a new line-up, a new partner and an updated weapon

When the Red Bull Off-Road Junior Team competes in the 2021 Dakar Rally, things will look somewhat the same and somewhat different.

Returning to the iconic race will be Mitch Guthrie Jr., whose debut last year led to three stage wins and contention for an overall podium spot before he was forced to withdrawal on the penultimate day of racing.

“I feel we will be competitive from day one and I’m excited to hopefully be battling up front along the way.” – Mitch Guthrie Jr.

Joining Mitch will be Seth Quintero, who – at 17 years old – was too young to participate last year, and instead focused on locking up and repeating his Best in the Desert Championship in the Pro NA class back in the States. Now an 18-year-old, Quintero is ready to try his hand at arguably the world’s toughest race and will do so as the youngest competitor in this year’s Dakar race.

“Being only 18 years old and able to compete at such a high level with so many legends of the sport is something that I will never forget.” – Seth Quintero

“Everyone who loves our sport dreams of racing the Dakar, it has always been my dream.” – Cristina Gutiérrez

Partnering the program with a long-term vision will be industry leading SxS manufacturer Polaris RZR, rounding out a portfolio of team partners dedicated to supporting and developing the world’s top young off-road racers. The partnership will continue to expand the global scope of the Red Bull Off-Road Junior Program as well as create a collaborative effort to push forward the performance of the SxS space. The goal is to give the best equipment and the best possible environment to breed and grow the next generation of off-road drivers.

The OT3 by Overdrive, the team’s weapon of choice and purpose-built machine meant to take on the world’s toughest desert races, will also boast a new, more aggressive look. The vehicle’s facelift goes beyond a more combative look and feel as the OT3 has undergone some significant updates and package development that the drivers can’t wait to run in Saudi.

The upcoming Dakar Rally kicks off on January 2, 2021 with a prologue stage in the Saudi Arabian city of Jeddah. Then comes 12 intense stages over perilous terrain before those still remaining in the convoy reach the finish line back in Jeddah on January 15.

Mitch Guthrie Jr.: “It feels so good to be returning to Dakar 2021. It’s been a long year and the fact this race is happening is awesome for motorsport. We are incredibly prepared compared to last year where we were kind of thrown into it. We had many highs and lows last year but learned so much along the way that will make this year much easier on us. I feel we will be competitive from day one and am excited to hopefully be battling up front along the way.”

“The base of the OT3 is still there but overall, it’s almost a new car. Overall so many small and big changes have been made to improve in so many different areas. At this point Ola and I are so comfortable in the car and also confident in it which is important.”

“I’m stoked on my team-mates this year! I’ve been friends with Seth for a long time now and it’s awesome to have a team-mate you are close with especially in a race like Dakar. Cristina is awesome! She got along with us and the entire crew so well and she will be a great addition to the team. Along with a ton of Dakar experience as well as many other types of racing.”

Seth Quintero: “Competing in Dakar 2021 means a lot to me. Being only 18 years old and able to compete at such a high level with so many legends of the sport is something that I will never forget.”

“Being the youngest competitor definitely puts some pressure on your back but takes it away at the same time. I feel like there is going to be a lot of eyes on me and I have a lot to prove since I am so young, but I’m also very new to the sport. Also being the youngest American to compete in this event is amazing. I hope this opens up eyes to so many people back home and gets them motivated to start competing overseas. My main goal is to pave the path for the generation behind me.”

“Having the opportunity to race the OT3 is a blessing. The team has designed an amazing car and structure in the program. Everybody gets along so well and wants to see the beat for one another. It is very different from what I race back home, there is less travel, more power, the OT3 is manual, and many other differences but they also feel similar in a sense that they are both UTVs.”

Cristina Gutiérrez: “The Dakar in Saudi Arabia is really cool, it’s great that we get to go back there. Everyone who loves our sport dreams of racing the Dakar, it has always been my dream. The atmosphere around the rally was incredible last time in Saudi Arabia. I’m really happy to be heading back.”

“Since my first test with my new team it has been incredible. Getting to know everybody involved in the team has been a pleasure. Everything about the set-up is very professional and I’m looking forward to the chances that this new opportunity has given me.”

“I always come to the Dakar focused on doing the best job I can do. I have learned so much from the Dakars I have already done and I will aim to put all of these lessons into practice in 2021 so I can help my new team.”