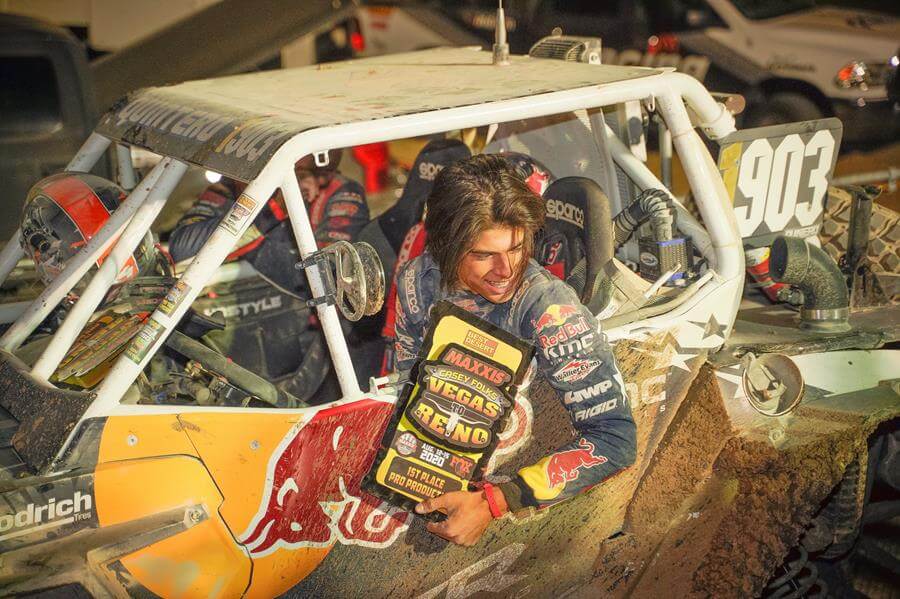 A punishing route of over 500 miles between Las Vegas and Reno has been conquered by the Red Bull Off-Road Junior Team. Victory in the Pro N/A Class for Seth Quintero at the longest off-road race in the United States sees the young squad continue their rapid path of development.

Under strict safety protocols the 24th edition of the Las Vegas to Reno Off-Road Race took place over the weekend. The enthusiasm for the return of racing was overwhelming as a bumper field of desert speedsters signed up to enter the contest.

Seth arrived in Nevada with not only his Vegas to Reno crown from last year to defend, but also his Pro N/A Class overall Best in the Desert series title from the previous season. The teenage off-road racing sensation led from the front throughout to claim a comprehensive victory.

Seth’s fellow Red Bull Off-Road Junior Team member, Mitch Guthrie Jr., was also in action in Nevada. Mitch battled through the pack from a sixth place start to take the lead going into the last pit stop. Then a heavy collision with a rock in the final part of the race saw the lights fail on Mitch’s machine.

“It was pitch black so I went about as far as I could with no lights until we pulled over to wait for someone to follow. We followed a 6100 truck about 10 miles until Phil (Blurton) caught us.” – Mitch Guthrie Jr.

Mitch was able to secure a second place finish in his class, but after coming so close to the win it was a “heartbreaker” for the fierce competitor from Glendora, California. However, the result does give Mitch plenty of useful championship points as he defends last season’s Best in the Desert overall series victory in the Pro Turbo Class.

Both Seth and Mitch were given plenty of inspiration by Bryce Menzies’s powerful performance in the prestigious “Trophy Truck Unlimited” class. Bryce tore into the 500-mile-plus route to win by nearly 10 minutes. Vegas to Reno is emerging as one of Bryce’s favourite races on the calendar as he plans to return next year in search of the three-peat.

“We just won Vegas To Reno two years in a row. Lucky and blessed to be racing. Thank you to everyone that makes this happen I’m so grateful.” – Bryce Menzies

Elsewhere in the “Trophy Truck Unlimited” race there was a fifth place finish for Andy McMillin. It was a highly credible display from Andy who battled back from a disappointing qualifying session that saw him starting as the 22nd truck onto the course.

“We never gave up, kept our heads down and kept fighting. We are relentless; we will fix our small mistakes and be back at the next one stronger than ever.” – Andy McMillin

The 2020 Best in the Desert series continues next month with the National Desert Cup back in Nevada. The Red Bull Off-Road Junior Team are also looking forward to being reunited with the specially designed OT3 side-by-side machine and resuming rally-raid competition ahead of the 2021 Dakar Rally.

Seth Quintero: “So stoked right now! We are… #VegasToReno Winners! Backed it up to the Silver State win and backed it up front the Vegas to Reno win last year!! Thank you to all the companies that have helped me get to this point, this race wouldn’t have been won without you guys!”

Mitch Guthrie Jr.: “Well, yesterday was a heartbreaker to say the least. We had a perfect run going, got in the physical lead, and left the last pit with about a 6 minute lead. Shortly after leaving the last pit we center punched a rock in the front end. The one issue that caused was our Switch Pros panel stopped working so we had no lights.  It was pitch black so I went about as far as I could with no lights until we pulled over to wait for someone to follow. We followed a 6100 truck about 10 miles until Phil (Blurton) caught us.

“When Phil passed us we followed him for around 10 miles. The rain caused a lot of mud so when we ran out of micro fibers I flipped my visor up and ate mud until I couldn’t open my eyes anymore. I was forced to pull over and we lost him. From there we ran as fast as we could using a small flashlight we had in the car and brought the car home to what looks like a 2nd.”

Bryce Menzies: “We just won Vegas To Reno two years in a row. Lucky and blessed to be racing. Thank you to everyone that makes this happen I’m so grateful. Now I’m going home to see my 6 month old.”

Andy McMillin: “Our 2020 @bestinthedesert #VegasToReno was an up and down day. It came down to track position, and the cards would have to fall perfectly in our favor in order for us to challenge the guys up front for the win.

“We ended up with a 5th place and I’m very proud of the effort my team put in. We never gave up, kept our heads down and kept fighting. We are relentless; we will fix our small mistakes and be back at the next one stronger than ever. Johnny prepped an amazing truck and there are a lot of positives to still take away. Our next race is the Baja 500 and we can’t wait to be back down in Baja!”