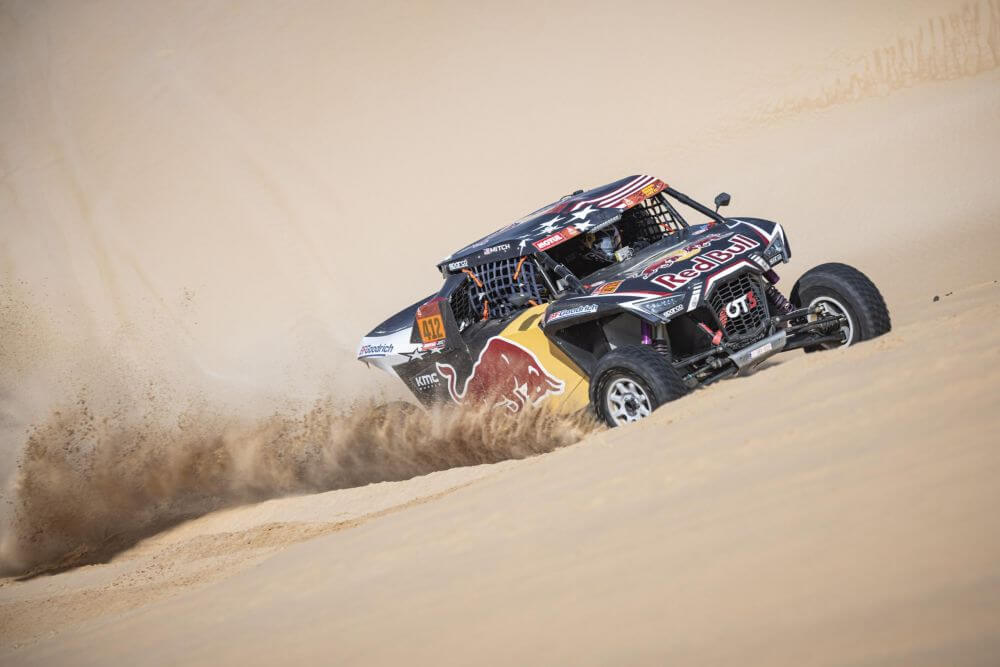 Red Bull Off-Road Team USA have won six of the first 10 stages in the side-by-side race at the 2020 Dakar Rally. Results have been even better on the last two days of racing, with the team scoring 1-2 finishes on Stages 9 and 10.

Stage 10 between Haradh and Shubaytah saw Mitch Guthrie Jr. (USA) claim a third stage win of his debut Dakar drive. Alongside co-driver Ola Floene (NOR), Guthrie Jr. was able to dominate the dunes in his OT3 by Overdrive throughout the stage.

“I’ve ended up with the stage win which is really awesome. Blade’s right behind me so we went 1-2 again. It’s another successful day.” – Mitch Guthrie Jr.

Guthrie Jr. celebrated with his team-mate Blade Hildebrand (USA) at the finish line as the Dakar Experience drivers made it back-to-back 1-2 finishes. On Stage 9 it had been the turn of Blade and co-driver Francois Cazalet (FRA) to control the race from Wadi Al-Dawasir and Haradh.

“I know a lot of the drivers in other teams at the Dakar. These drivers have been coming up to me to tell say how impressed they are with Blade and Mitch.” – Jean Marc Fortin, Overdrive CEO
Mitch, Ola, Blade and Francois are with their OT3s in the marathon stage bivouac tonight. Marathon stage rules mean they’re separated from their mechanics so any repairs needed on the car must by carried out themselves.
“We had minimal issues with the car today. We’ll be able to get everything done that needs to get done tonight. Then tomorrow we’ll head out for the second part of the marathon stage.” – Blade Hildebrand

Since generously donating his engine to Mitch and Ola and retiring from the rally, five-time Dakar winner Cyril Despres (FRA) has been continuing his coaching brief with the team. Despres was able to offer his expertise on how best to cope with the testing conditions that occur during a marathon stage.

“I was able to coach the guys in the days leading up to this marathon stage. I told them what I know and they were really paying attention. From day one they’ve been listening, but yesterday they were even more focused.” – Cyril Despres

The progress made by Red Bull Off-Road Team USA at their debut Dakar has been truly remarkable. With all three crews – including Despres and Mike Horn (SUI) scoring stage wins – and now a succession of 1-2 finishes. The performance bodes well for the continued improvement of the OT3 and the development of the Red Bull Off-Road Junior Program drivers.

“The results we’re enjoying now are down to the hard work we’ve been putting in since arriving here. Now we’re coming close to the end, but the rally is not finished yet. We want to keep improving until the end of the last stage.” – Jean Marc Schmit, OT3 Technical Director

Two stages remain at the 2020 Dakar for Red Bull Off-Road Team USA. Tomorrow is the second part of the marathon stage, a further 379 kilometres against clock. Then on Friday, the final stage will be contested between Haradh and Qiddiya.

The 2020 Dakar finishes on Friday, January 17 in Qiddiya.