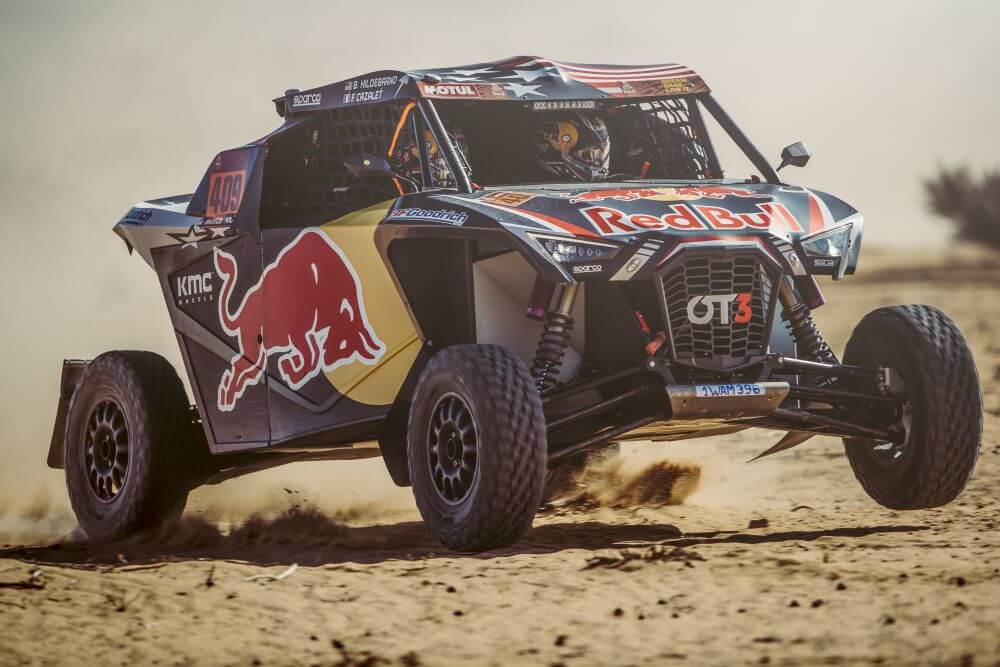 Red Bull Off-Road Team USA have climbed a steep learning curve at the 2020 Dakar Rally. On their debut Dakar the team came out fastest on half of the side-by-side stages as they laid the foundations for more success to come.

The highs and lows came thick and fast for the squad as they balanced back-to-back 1-2 finishes on Stages 9 and 10 with the heartbreak of early retirements. Crossing the finish line for the team in Qiddiya gave Blade Hildebrand (USA) the chance to reflect on an eventful fortnight in Saudi Arabia.

“It feels good to cross the line of Stage 12. Day one seems so far away now. 12 days of racing later and we’re finally here. I’ll remember my first stage win of this Dakar on Stage 7 forever.” – Blade Hildebrand

Blade, alongside co-driver Francois Cazalet (FRA), was able to run at the front of numerous stages at this Dakar. Despite running into mechanical trouble more often than they would have liked, the crew will leave the Middle East with a lot of good memories from the rally.

“I think we’ve made some good achievements in this adventure. We’ve won stages and so have the other guys in the team. We’re proud of the work we’ve done here.” – Francois Cazalet

Blade and Francois’s OT3 by Overdrive was the only Red Bull Off-Road Team USA car to make it to the finish line of the 2020 Dakar. Team-mates Mitch Guthrie Jr. (USA) and Ola Floene (NOR) may have withdrawn on the penultimate stage, but they can still reflect on a positive Dakar debut. Guthrie Jr. went quickest on a total of three stages and was in contention for the overall podium at the midpoint Rest Day in Riyadh.

“We’ve been able to improve the performance of the car. Increasing the performance of a car is the most difficult thing you can do so we must be proud of the improvements we have made in these two weeks.” – Jean Marc Schmit, OT3 Technical Director

There’s also been the involvement of the coaching and mentoring crew of Cyril Despres (FRA) and Mike Horn (SUI). Not only did Cyril make history by becoming the first Dakar competitor to win stages in three different categories (bike, car and SxS), but Mike read the roadbook for a stage win on his Dakar debut!

Cyril and Mike have also been full of wisdom for Blade, Francois, Mitch and Ola. The guidance of the senior members of the team has helped forge a great spirit within the camp. This was in evidence when Cyril and Mike donated their engine so Mitch and Ola could continue their rally in the Dakar Experience class alongside Blade and Francois.

“We’re already looking forward to next year. The terrain that we’ve raced on in Saudi Arabia makes me excited to come back. I know the whole team feels the same way.” – Jean Marc Fortin, Overdrive CEO

There’s plenty more to come from Red Bull Off-Road Team USA as they target further races this year. Stay in touch by subscribing to the Red Bull Off-Road Junior Program newsletter, our distribution service for inside stories covering our Red Bull rally-raid athletes.