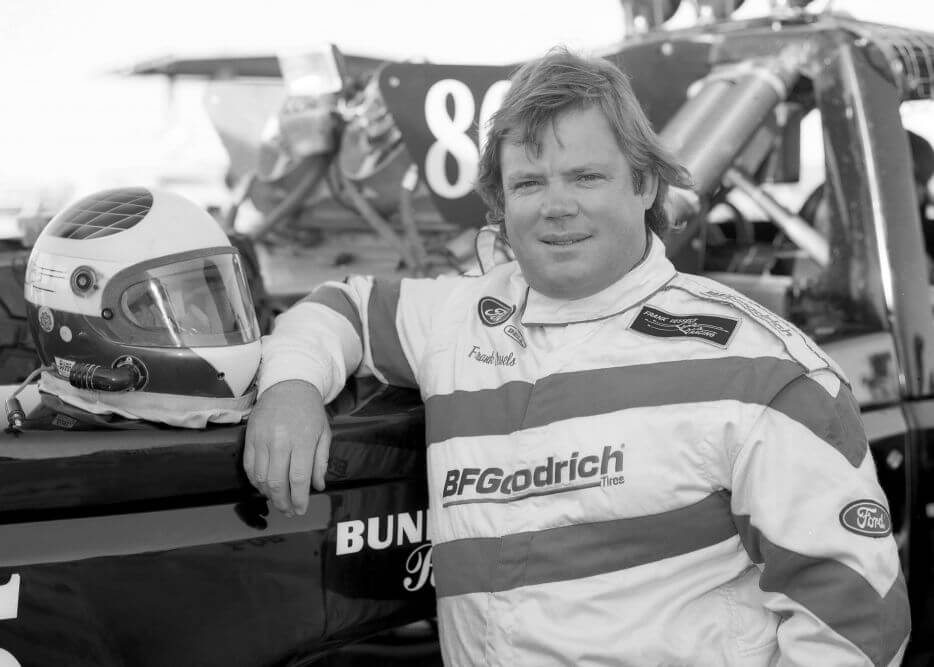 It’s said that sights, sounds, and smells all evoke emotionally charged memories. My earliest memories of off-road racing are definitely emotionally charged and the 1975 Baja 500 encapsulated those memories in the form of a class 8 truck driven by Frank “Scoop” Vessels. I remember those familiar horse heads flying by me jumping the Ojos Negros cattle guard at speed, the sound of that American V-8, and the smell of the exhaust, all firmly etching my most vivid recollections. As an 11 year old budding photographer I was hooked on the sport and Scoop was my hero!

Scoop and his father Frank Jr started out racing off-road in a Ford van in an effort to keep Scoop away from drag racing on the streets. That humble beginning would take Scoop from a hobby to being instrumental in helping develop off-road racing’s first radial truck tire and it’s first win in class 8 at the 1977 Baja 500. Shod with the first generation B.F. Goodrich Radial All Terrain T/A tires Scoop would take the class win and follow it up with a class win at the Baja 1000 later that same year. Up to that point B.F. Goodrich was known for their agricultural line of tires but now they were firmly entrenched in the off-road racing game for the long haul!

Moving forward, Scoop went on to own and race the iconic BFG Blazers that he and his best friend Bobby Gordon campaigned along with Gary Pace and Charlie Haga riding shotgun. Scoop was not known for his mechanical ability but he could out strategize most! From skipping pits to stretch out a lead, to moving pits into remote parts of the course, Scoop was always looking for a competitive advantage. During Scoop’s racing career he also looked for ways to promote off-road racing and was instrumental in having an ABC sports reporter ride along as a way to give viewers of “The Wide World of Sports” a first-hand look at the sport. (1980 Baja 1000 with Sam Posey and with Jack Arute riding in the 1987 Baja 1000)

Throughout the years Scoop raced many different vehicles, having many successes with race wins, class championships, and helping launch the NASCAR truck series. Scoop also brought new sponsors into the sport and always believed in giving back while paving the way for those coming up behind him.

Being known for leading two lives, Scoop somehow found a way to balance his love for horses and horsepower. Scoop went on to reach many milestones in the horse world as well. Scoop turned Vessels Stallion Farm into the dominant source of Quarter Horse racing bloodlines. With one of the first yearlings broke on the farm, First Down Dash became the all time leading sire known as the greatest stallion of all time! Scoop also focused on Thoroughbreds with In Excess becoming a leading Thoroughbred Stallion. The following highlights help tell the story of both lives!

Frank “Scoop” Vessels racing at the 1977 SCORE Riverside Off Road World Championships in his 1972 Ford F-100 built by Charlie Haga in the Bill Stroppe Racing shop. This truck ran on propane with a modified carburetor and a “quick change” tank system by a company called Impco.

Scoop getting some air time crossing the Ojos Negros cattle guard in the class 2 BFG Blazer with Gary Pace riding shotgun at the 1980 Baja 500.

Scoops best friend Bobby Gordon taking the class 1 BFG Blazer through a wash outside Tres Hermanos at the 1980 Baja 500. Scoop and Bobby were lifelong friends and shared many race wins and milestones through the years.

Scoop taking the class 8 Bunderson built truck affectionately known as “Roseanne” through it’s paces during the night race at the Antelope Valley Fairgrounds in 1993.

Scoop wheeling “Roseanne” after she was was “transformed” into a Trophy Truck in 1994. Scoop formed a joint Vessels / Gordon team with Robby Gordon that debuted in 1994, the inaugural year of the Trophy Truck class.

After winning the 1987 Baja 500, Bonnie Vessels bought these roses for Scoop from a local vendor near the finish line. After suffering engine troubles in prior races, Steve Kelley loaned us his backup engine and we went on to win with Steve finishing second. It was an exciting race as we had only one issue with a leaky fuel pump. We splashed a quick 10 gallons of fuel in Ojos Negros to ensure that Scoop would make it to the finish line.

Scoop crossing the familiar Ojos Negros cattle guard on his way to winning the 1977 Baja 1000. Scoop would win both the Baja 500 and Baja 1000 that year and win the class 8 championship.

Bonnie Vessels all smiles after riding shotgun at the 1993 Ultra Wheels Closed Course Off Road Championship at the Antelope Valley Fairgrounds.

Scoop with Gary Pace riding shotgun in the class 2 BFG Blazer during the 1979 Baja 500. Gary would ride shotgun for a few years with Scoop forming a great team!

Scoop’s 1972 Ford F-100 was restored to racing condition and raced by Cameron Thieriot in the 2016 Mint 400. Here it is seen crossing Jean dry lake bed at speed. Cameron donated the truck to the Off Road Motorsports Hall of Fame and it is now on permanent display at Terribles Hotel & Casino in Jean Nevada. Stop on by and you can see many Vintage Off-Road racing vehicles on display for free!

*Footnote: In the early 80’s I would finally meet my hero and go on to help prep, chase and pit a myriad of trucks from 1987 to 1995. I also became Scoop’s race team photographer in those years as well as shooting images for the Vessels Stallion Farm & San Luis Rey Downs Golf Course. Having become personal friends with both Scoop and Bonnie, my wife and I would eventually be wed on the Stallion Farm in 1994. Although very hard to talk about, Scoop passed away in an airplane accident in 2010 leaving a huge void but also leaving a legacy and great memories for those of us that were blessed to have known him.