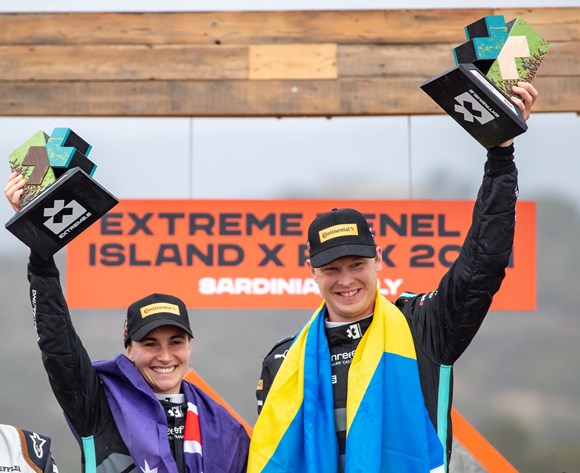 RXR drivers Johan Kristoffersson and Molly Taylor kept their heads in changeable conditions to seal a dramatic victory in Sardinia ahead of ABT CUPRA XE, who secured their best result of the season in second.

It was heartbreak, though, for long-time leaders in the Final, SEGI TV Chip Ganassi Racing, after Sara Price’s crash on Lap 2 caused terminal damage and meant she had to stop on track, ensuring the team could only finish as high as fourth on their Finals debut. 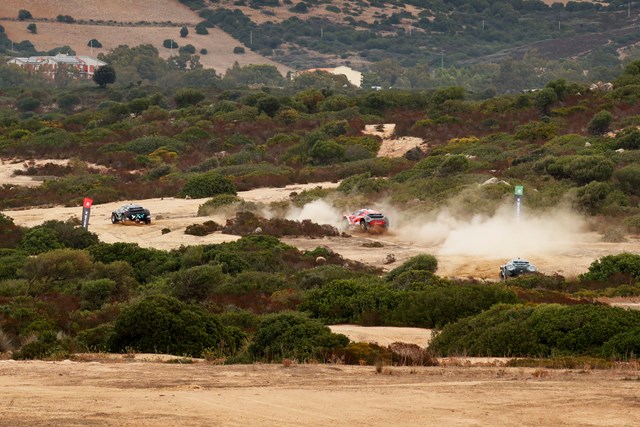 That meant JBXE were able to secure their third podium finish in succession with third place despite also suffering damage out on the course.

Bad luck once again befell fastest qualifiers X44 in the final as Sébastien Loeb was forced to stop out on track and retire with broken steering. Loeb was running in second behind SEGI TV’s Kyle LeDuc despite driving with a slow puncture at the time of the stoppage, which meant the team were to fall even further behind winners and championship leaders RXR in the standings.

Molly Taylor, Rosberg X Racing, said: “It was pretty slippery out there, so it was a bit difficult to judge at first. From that point it was just trying to manage the risk and I think that is what we did really well. Johan brought it home and again it was just an amazing effort by all of the team. We had a very challenging weekend from our side, but we never gave up and are very happy to be the winners here.”

Johan Kristoffersson, Rosberg X Racing, said: “When I took over the car, we were in second place and were pretty isolated. We had Mattias [Ekström] behind, but I knew it was going to be tricky to do the overtake. Then I heard that Sara [Price] had suffered broken steering out in front so I tried to get the car back in one piece by not taking any big risks. I think in this final that Molly really did the best job and it feels great to bring it home.”

A heavy downpour prior to lights out made for the first ‘wet’ Final of the Extreme E season, providing the five finalists with a new challenge to overcome in their bid for victory at the Enel X Island X Prix.

X44 were able to take their place in the Final despite suffering heavy damage in the opening Semi-Final of the day. In a sign of the unique camaraderie demonstrated across the Extreme E paddock, X44’s efforts to rebuild their damaged car were boosted by the support of mechanics and engineerings from the Andretti United Extreme E team to get their ODYSSEY 21 ready successfully in time for the Enel X Island X Prix showpiece.

In treacherous conditions four of the five teams were able to get off the start line cleanly, although ABT CUPRA XE were left with plenty of work to do after Jutta Kleinschmidt stalled on the grid. It looked like X44 had staged a remarkable comeback to lead into the first corner, but were beaten spectactularly by LeDuc who managed to get in front after using the alternate route.

A spin for Mikaela Åhlin-Kottulinsky put JBXE at the back of the field, while the slow-starting Kleinschmidt quickly made up ground on RXR’s Taylor to battle for third. This soon became a three-way tussle for second as Loeb began to lose pace as he struggled with a slow puncture, allowing LeDuc to build an impressive lead out in front.

After Loeb was forced to retire with broken steering, Taylor and Kleinschmidt remained nose-to-tail in their battle for second as they headed towards the Driver Switch zone.

As LeDuc exited his SEGI TV Chip Ganassi Racing car in the Driver Switch zone following a superb opening lap, it appeared the so-far luckless team were about to complete a heroic turnaround and bring home their first Extreme E win. However, they were cruelly denied as Price suffered terminal damage to her car after making contact with a rock out on the course, which ruled them out of contention for victory and meant they could only finish as high as fourth.

This left RXR’s Kristoffersson in the lead and chased by Mattias Ekström, who continued on at great speed despite driving without his left-hand door throughout the lap.

The ABT CUPRA XE driver was no match for Kristoffersson, though, who kept up the pressure to extend his lead and take RXR’s third win of the campaign and put his team as the firm favourites for championship glory at the final Extreme E X Prix of the season in Dorset, UK, in December.

Jutta Kleinschmidt, ABT CUPRA XE, said: “I was so concentrated on the start to make it well and light and then I pushed the car and nothing happened. I said ‘oh shoot what is going on!’

“Then I pushed it, but everybody was gone so I had to try to come back which worked very well. We so nearly made it ahead of RXR, but unfortunately then Mattias lost the door so he had to slow down to not let the water come in because then maybe you have mud inside and then you don’t see anything anymore. Finally, though, we are on the podium so we are happy.”

Kevin Hansen, JBXE, said: “Well it was certainly a different one! We had a really good start and Mikaela did great there, but I think she must have hit a bump wrong and got a bit of damage to the car. However, we got it back to the Switch zone and from then on I tried to just bring it carefully as I could around the track and in the end that was good enough for third. It is another podium for us and I think that is great for the team.”

Mikaela Åhlin-Kottulinsky, JBXE, said: “In the end we started this week with no practice lap which meant coming into Q1 with no lap, so I think we fought back well. It is a shame what happened in the Final, though, as we got a good start. However, like Kevin said, we delivered P3 for the team so it feels good.”

There was immediate drama in the first of Sunday’s wheel-to-wheel contests. At the wheel of the Andretti United Extreme E ODYSSEY 21 E-SUV, Timmy Hansen launched off the start line and made the best getaway as the lights went green in Semi Final 1. In doing so, Hansen cut across the nose of SEGI TV Chip Ganassi’s Sara Price and the two cars touched as the #23 car veered towards the left-hand lane.

In the aftermath, the Andretti United Extreme E machine also made slight contact with X44’s Cristina Gutiérrez. The resulting collision broke the front-left wheel of Hansen’s car while sending Gutiérrez into a huge, high-speed crash over the rocks. The damage from the contact ensured an instant retirement for X44, as the team’s run of bad luck on Finals Day continued.

Hansen would also retire on the opening lap and was later given a penalty for the incident. This demoted the team to last place and promoted X44 into second and a place in the Final, albeit with plenty of work to do to repair their heavily damaged car in time. 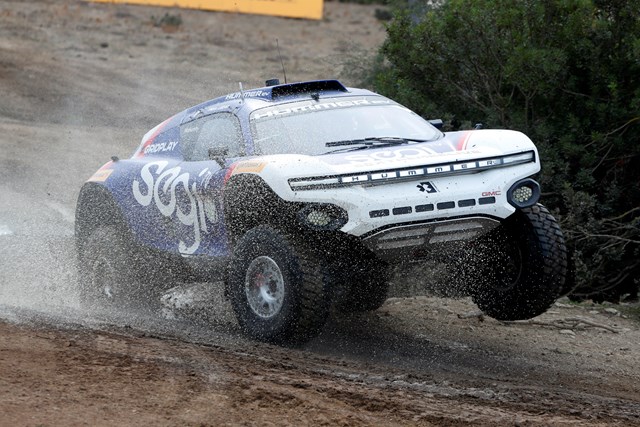 These retirements left Price and Kyle LeDuc with a trouble-free run to victory in Semi-Final 1 and secured SEGI TV Chip Ganassi Racing’s first Final appearance of the season.

With everyone still catching their breath following the opening race of the day, Semi-Final 2 was well set to be a classic.

Launching from the left-hand side of the grid, Rosberg X Racing’s Johan Kristoffersson led from ABT CUPRA XE’s Mattias Ekström and ACCIONA | Sainz XE Team’s Carlos Sainz Snr. off the start line.

Having started on the right-hand side of the grid Sainz Snr., the two-time World Rally champion, briefly climbed to second, taking the alternate route off the start line. Meanwhile Ekström followed Kristoffersson and was slowed by the resulting dust from the RXR car in front.

ACCIONA | Sainz XE Team’s bid for a place in the Final was short-lived, however, as Sainz Snr. was forced to drop back due to a power steering problem.

Despite the ACCIONA | Sainz XE Team being out of contention, RXR and ABT CUPRA XE continued to push their ODYSSEY 21 E-SUV’s to the limit. Their battle rumbled on after the Driver Switch zone, as ABT CUPRA XE’s Kleinschmidt gave chase to RXR’s Taylor, but the Australian star was not to be denied a comfortable Semi-Final 2 victory.

Kleinschmidt brought her ABT CUPRA XE car home to take second place and also graduate to the Final, with Laia Sanz finishing a distant third due to the aforementioned steering problem. 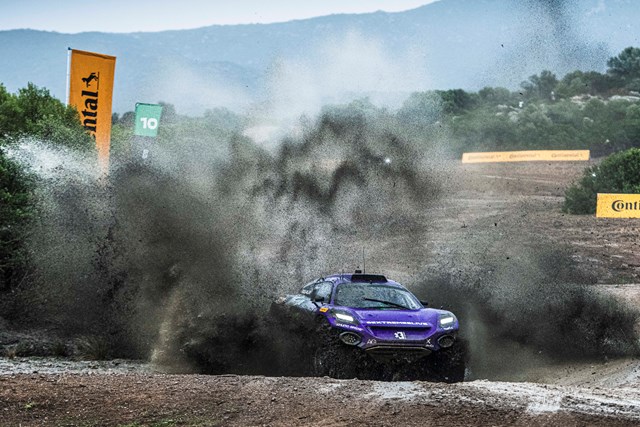 JBXE made it back-to-back Crazy Race victories to take their place in the Enel X Island X Prix Final.

Kevin Hansen took to the front for JBXE from the start and, after fending off pressure from Veloce Racing’s Emma Gilmour and XITE ENERGY RACING’s Oliver Bennett, ensured it was a lead that the team would not lose. In her bid for first, Gilmour was forced to drop back behind Bennett as the duo diced over second for the remainder of the opening tour.

The battle between the two looked set to continue after the driver switch, but disaster struck both teams on their second lap denying them a shot at victory and a place in the Final.