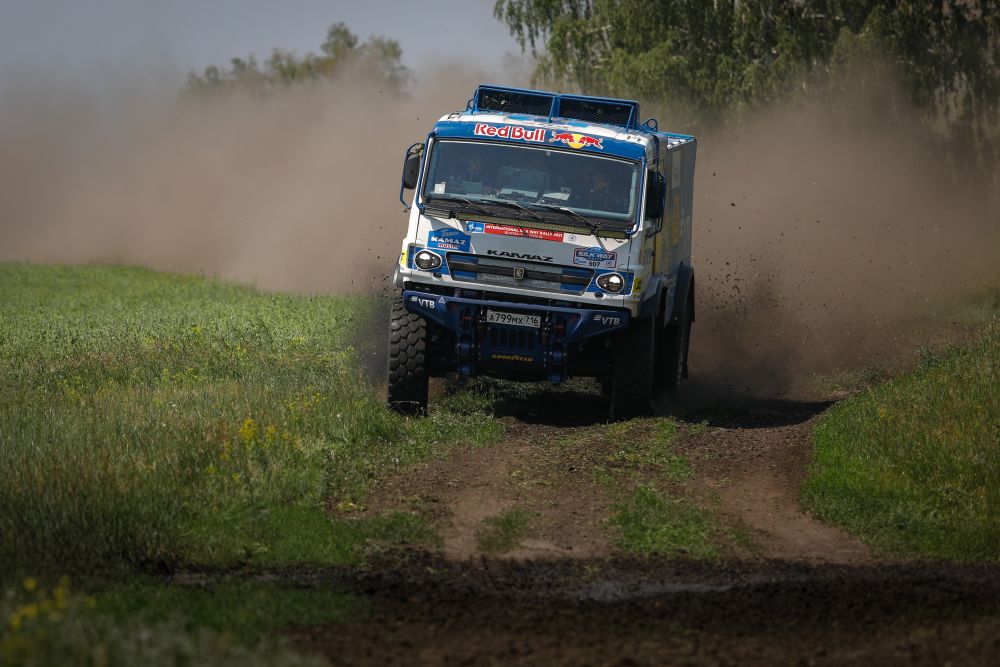 Ernesto AraizaJuly 2, 20210
Racers Find Their Rhythm In This New Era of Motorsports Courtship
Being back at the helm of a purpose-built mechanism, ready to dance the rally Tango, after a year-long hiatus from racing, socializing, hell, touching, is just the post-pandemic therapy we all needed (participants and spectators alike). And rekindling this romance with Motorsports began with a caravan ride through the Altai Republic, a region rich with altitude, tundra and marshy meadows.
Protected for its diverse flora and fauna, the thousands of rivers and lakes create a fairy tale atmosphere perfect for a healthy relationship between man, machine and Mother Nature. As with many of the Silk Way events, traveling through Russia can be burdensome when rain showers follow you and the open fields become bogged and buggy swamps. The mud grabs hold of you or your tires and attempts to drag you down to hell with the desperation of lost souls trying to trade places with the living. 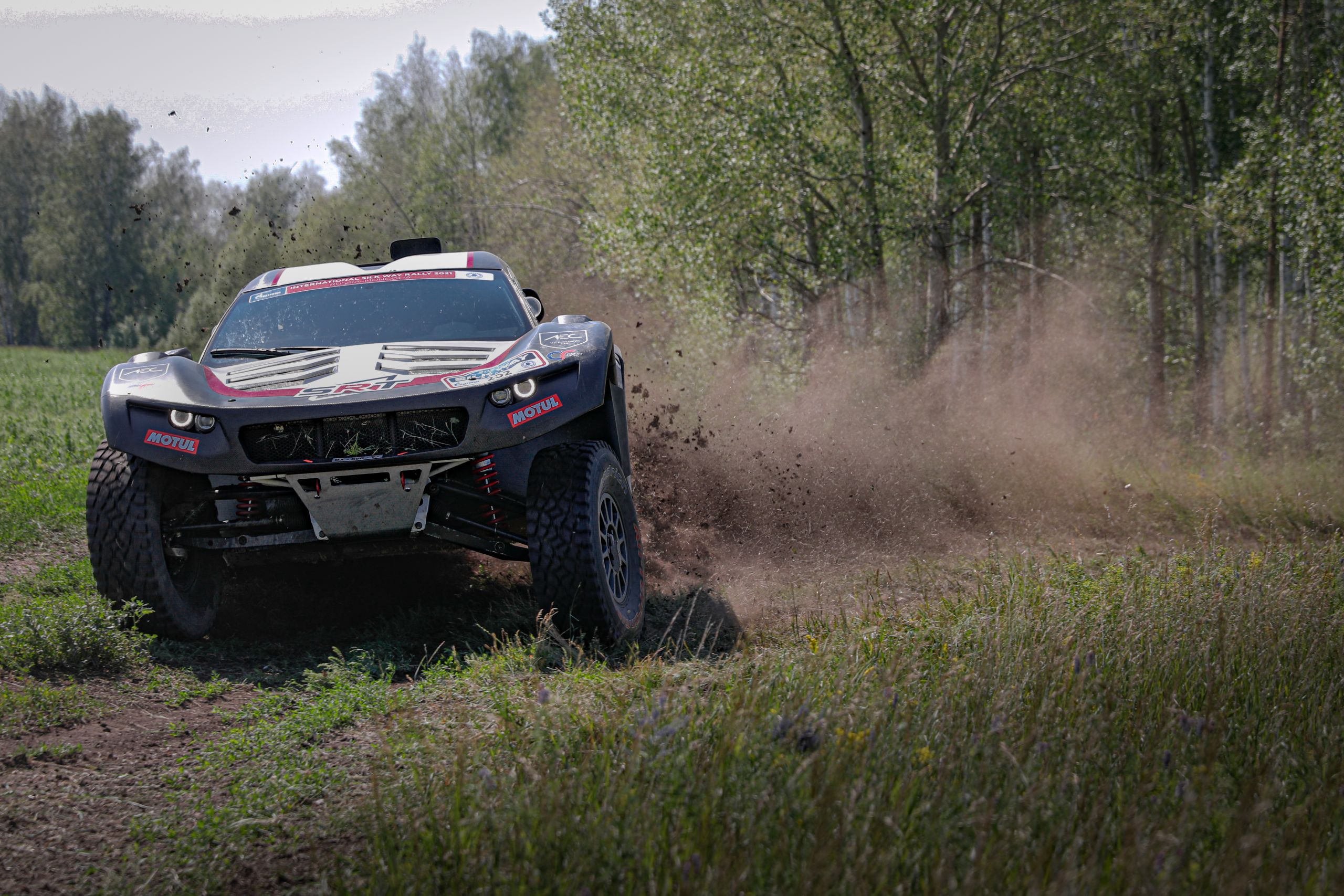 But this Siberian sinkhole is only awakened in the wet and it’s hidden beneath beautiful pastures, marshlands and groves of pearly white trunks growing together just enough apart to allow the sun to make them glow. Underneath all that green foliage, the earth is dark, almost volcanic and due to an abnormally hot summer, dry to the point of weightlessness. Thankfully, a strong breeze made the opaque timber-colored dust cloud predictable, therefore avoidable – to a point. No one left the racecourse without a new terra-skin cake on by multiple thin layers of dirt and sweat.
Since the Space Race, Russians Nationals (with alternate calling cards throughout history) have developed a reputation for putting up a good fight – if not always fair. But here on their home turf, the Silk Way Rally is being dominated by their brethren from Day One. By the time the last KAMAZ crossed the finish line of the first special stage – let’s be real, no KAMAZ crosses in the back of the pack unless it was an unseasonably shit day… When the last race-equipped vehicle rolled past Timing & Scoring, it was obvious the Cosmonauts beat everyone at launch in this battle. 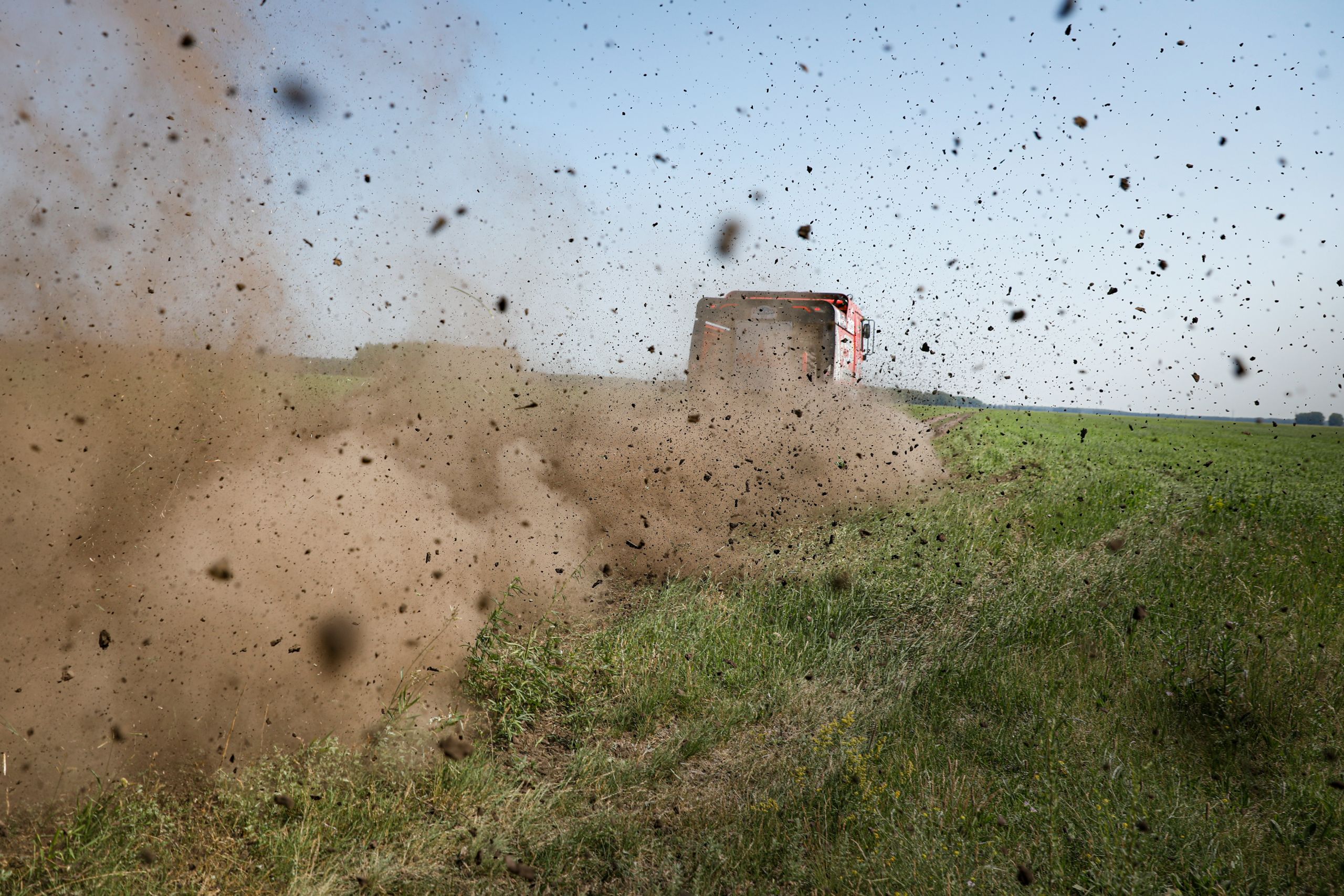 There are Russian leaders in every class save for Bikes, which was taken by Argentinian Franco Caimi (#2) giving Hero Motosports their best of three promising results. Even Aleksandr Maksimov (#102, MARI TEAM) conquered the Quads over Sonik Team namesake, Rafal Sonik (#101)!
“I was really confident with opening the stage but quickly found out that the route and roadbook here are a bit different than we are used to. I made a few mistakes second guessing some things that weren’t clear and it cost me a bit of time. But it’s good to learn things early on. Otherwise the tracks and terrain are really fun, and I’m excited for the days ahead.” – Skyler Howes, #10 Rockstar Energy Husqvarna 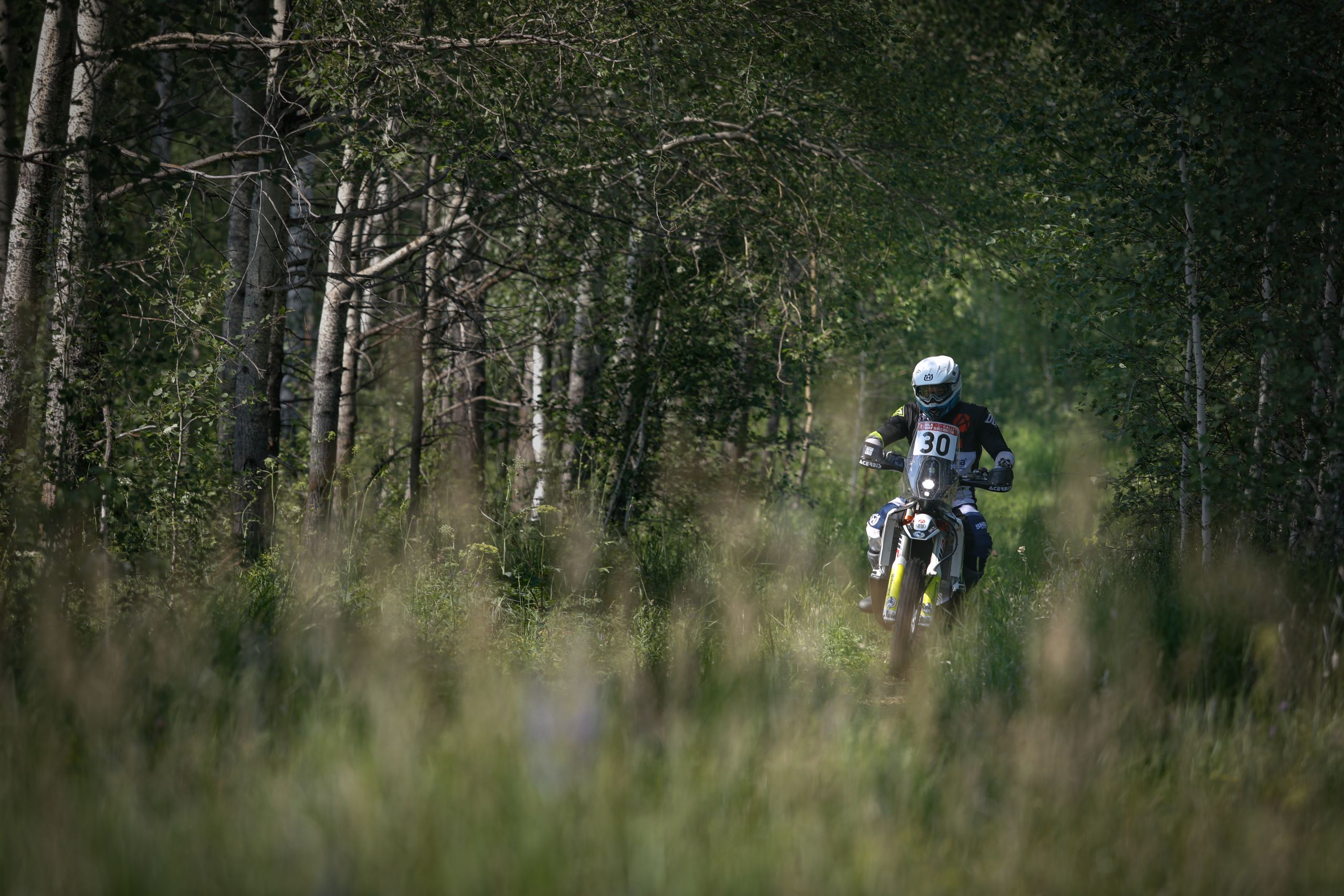 But today’s roadbook wasn’t for the faint of heart. And perhaps, too many came into the race with the mindset that the event’s shortest special at roughly 87 kilometers would be easy. This, clearly, was a mistake for many, even the more consistent and competent navigators. Rockstar Energy Husqvarna’s Skyler Howes (#10) felt his finish was bittersweet. With a few unrecognizable notes on his paper scroll – something a few regulars on the rally circuit commented on as well – Howes became a little turned around. A missed Waypoint or two later, he made up enough time to land the eighth spot, which was welcomed if it meant he didn’t have to open another stage. However, the amount of talent – and pressure from Mother Russia – a contender at this race needs every drop of advantage he or she can squeeze out of a round.
A sizable six-plus-minute gap between Howes and Caimi came to a surprise to spectators as the former man seemed to be leading the distance game halfway through the course. Barely 40 kilometers into the race, the reach between each of the top riders was staggering. Fellow American and Second Place SWR titleholder, Andrew Short (#29, Monster Energy Yamaha) didn’t find much more success, stopping at number Seven with only 00:03:28 separating him and the win. 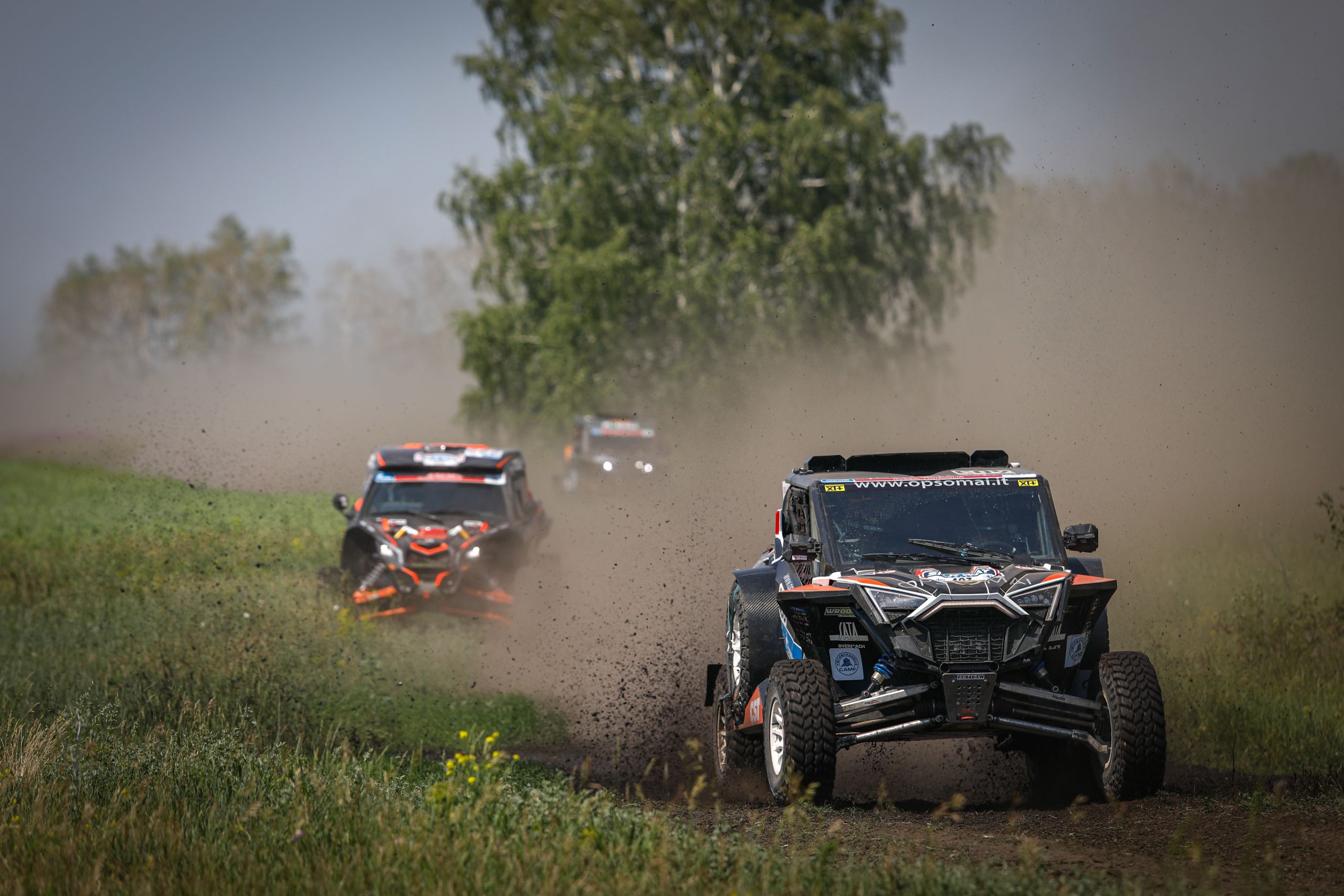 Short’s teammate and FIM points leader, Ross Branch (#16) was a minor error away from rolling past ASS with all the praise. Motos were the only category where (RUS) wasn’t the designation for a single pilot on the elite ladder, but in all fairness, there isn’t a Russian competing in this class at all. It didn’t hurt either that Siberia’s Altai is the backyard playground for many of the local drivers.
KAMAZ-MASTER is a prime example of a well-polished powerhouse intent on keeping this region their realm to rule. Dmitry Sotnikov, with co-pilots Ruslan Akhmadeev and Ligiz Akhmetzianov (#501) fought the hardest for their domain today, even if they only beat out MAZ-SPORTAUTO by 10 seconds. Captaining the #506 truck Aliaksei Vishneuski, accompanied by Maksim Novikau and Siarhei Sachuk, sent their MAZ 6440RR sideways through the tight twists of powdery earth carving an ash-colored path through the groves of birch trees which scattered in pods across the vast emerald-chartreuse countryside. 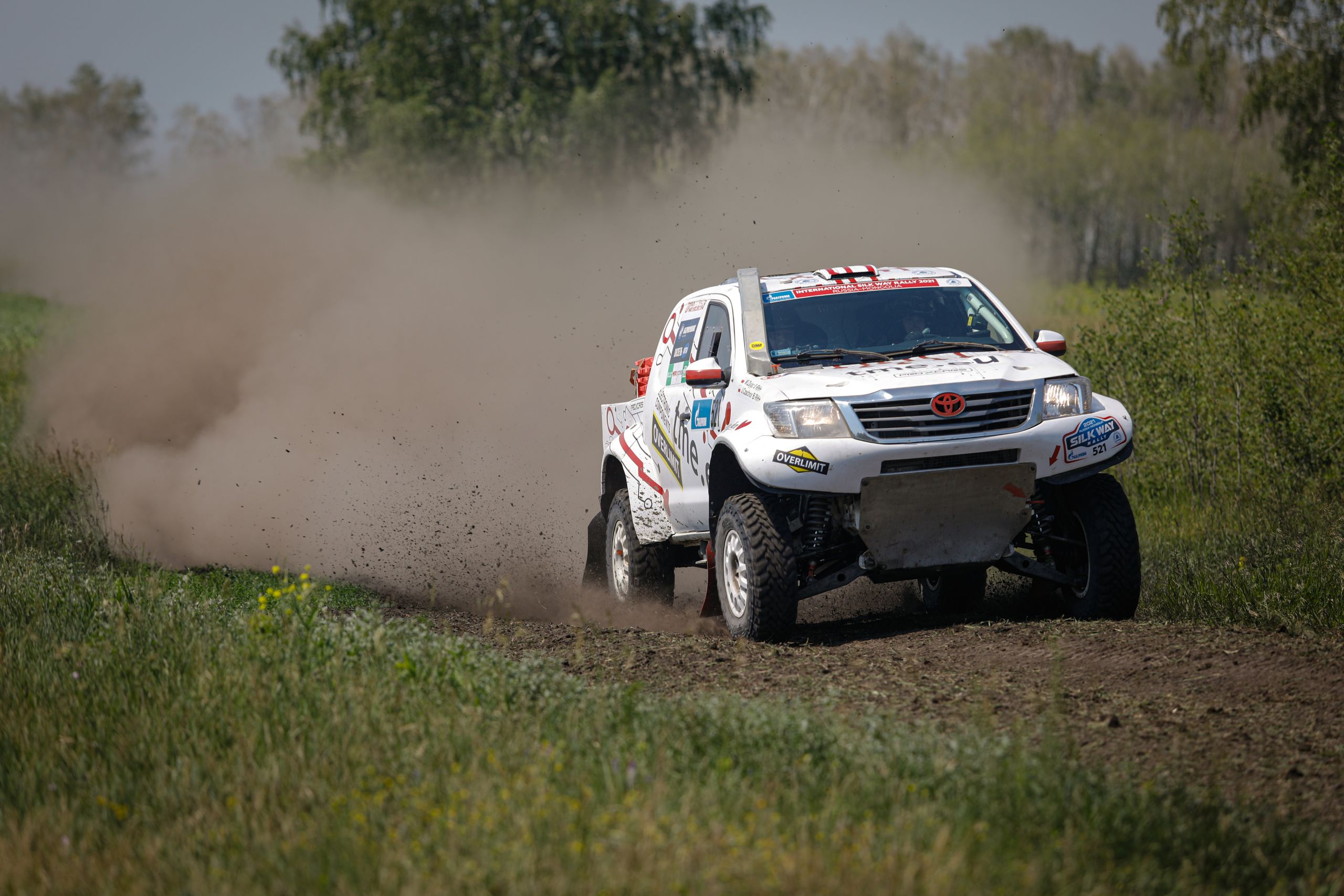 They never shoot to miss, but the Belarusians fell a bit short – by a strand of hair – in this initial brawl. No need to dwell, of course. Even the Cars faced defeat at the skilled hands of Denis Krotov and navigator Konstantin Zhiltsov (#203, MSK RALLY TEAM) who managed to put almost a minute on Yazeed Al Rajhi and partner Michael Orr (#200, OVERDRIVE HILUX TOYOTA).
“We were careful because we are not used to the new truck yet, we have to get used to its handling. The main objective today was to finish. The stage was short and dusty, it was impossible to stop, because that would have made us fall in the ranking. We understood the navigation quickly, we lost a minimum of time. We needed a balance between speed and precision. The special stage was an excellent test of the suspensions. So everything went well.” – Dimitry Sotnivoc, #501 KAMAZ-MASTER Team 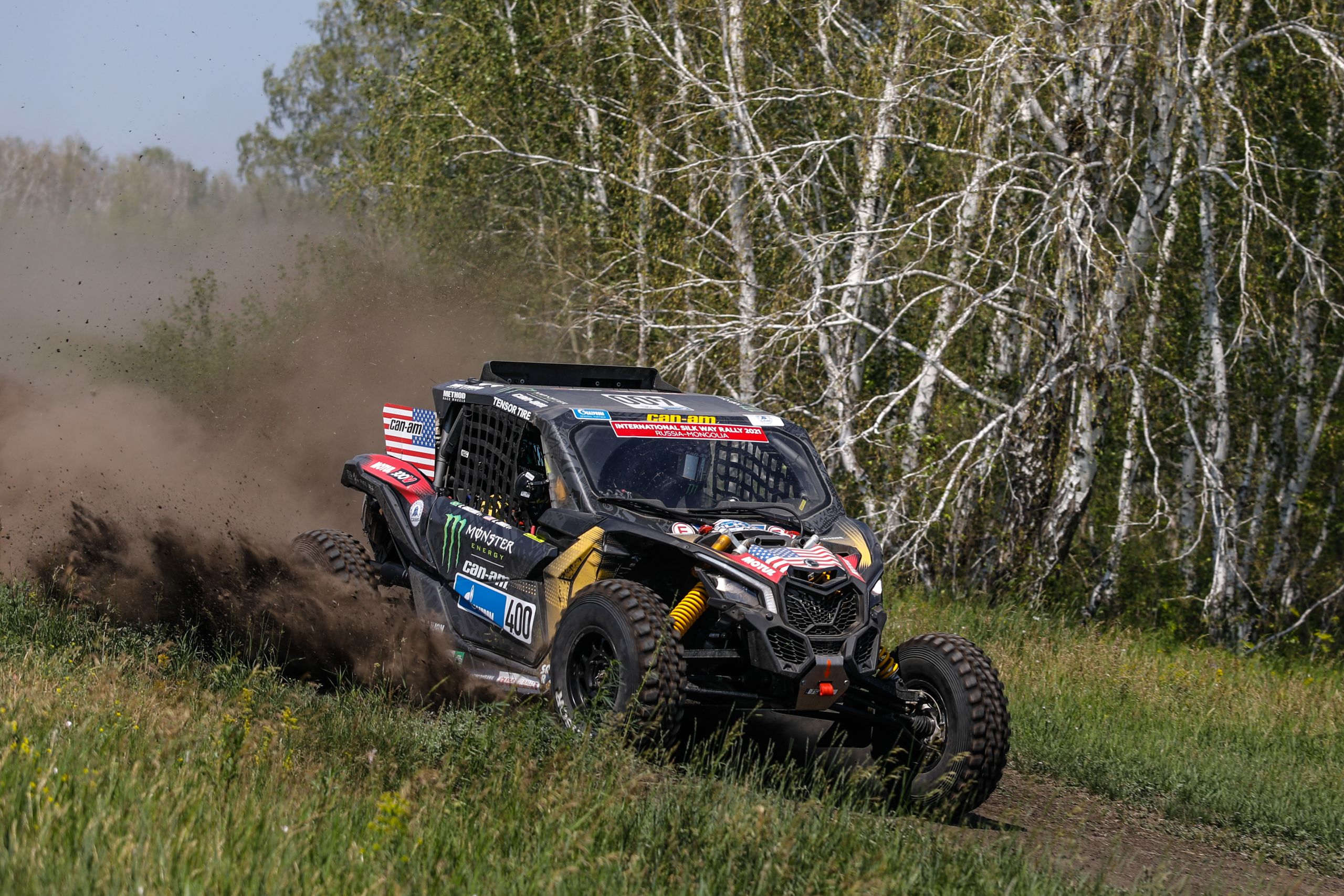 If you’re going to have setbacks, the competitors agree now is the time. Early issues have time on their side to find resolutions, learn lessons, polish skills. So Side-by-Side favorites like Austin Jones guided by Gustavo Gugelmin (#400) taking this opportunity to do just that – carry on better than ever. Many are hoping he’ll bounce back from today to represent the US of A as he had surely hoped: from the Winner’s Circle. That said, it’s undeniable the stage goes (again) to the Ruskies, Sergei Kariakin and Anton Vlasiuk (#404, SNAG RACING) whose closest adversaries – Eugenio Amos and Paolo Ceci (#402, SOUTH RACING CAN-AM) – were a whopping 5-minutes-27 behind. While #405 UTV driven by Evgeny Frezorger and Alexey Shpuk (SIBIRSDE) were trailing by an additional 79 seconds.
“Just finished Stage One out here at Silk Way Rally. A little bit of a tough day, with really hard navigation – everybody was a bit turned around. We opened up the road and struggled a bit with the roadbook, but we got it done. …It was a short stage, long liaison. We’re getting ready for tomorrow and to try and gain some time and have a better day. Overall, navigation was really hard, and we were turned around a couple times, but other than that, a really strong day, so [the team is] super happy.” – Austin Jones, #400 Monster Energy Can-Am
The Napoleon of special stages, the Silk Way Rally’s send-off delivered a quick, brutal punch to the jaw and lingered over the 560-kilometer drive to the next bivouac in Novosibirsk. If this challenge offered any insight as to what’s in store for competitors, then their 267 km transit to DSS in the morning is going to be spent plotting an airtight gameplan. And we can’t wait to see who might spring a leak first. Oh, rally.
Source: Westx1000 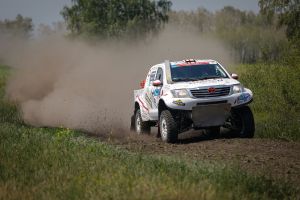 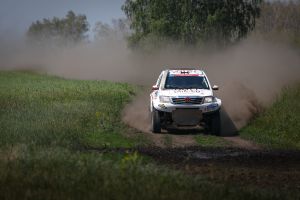 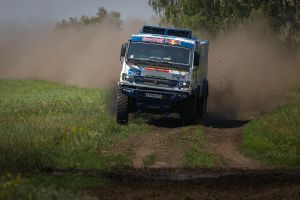 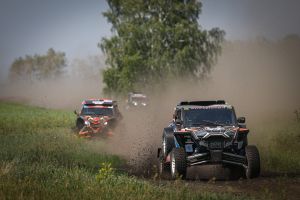 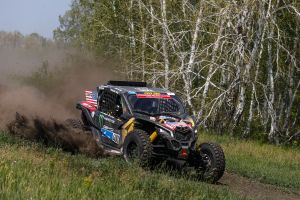 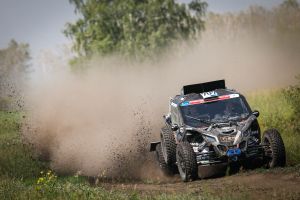 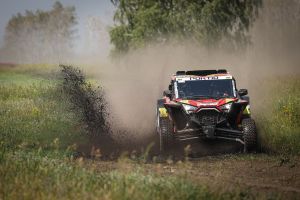 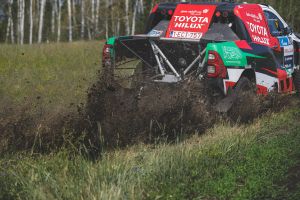 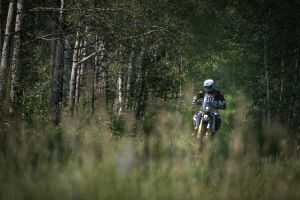 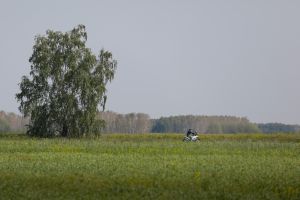 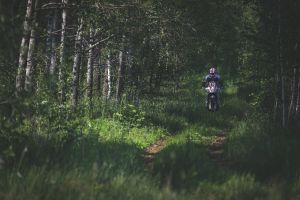 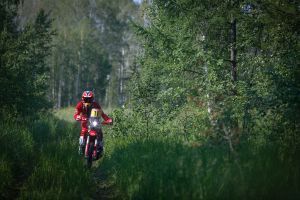 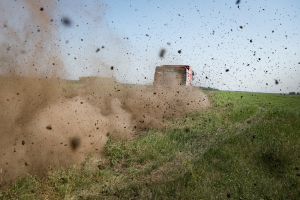 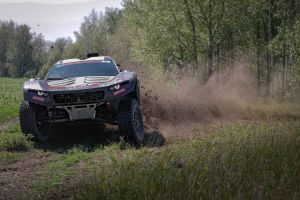 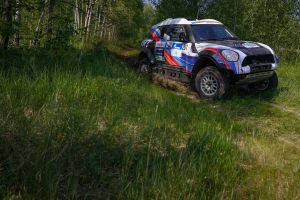