The Organization Makes the Most of Bad Situation, And It’s Epic

The 411-kilometer morning liaison offered some of the most picturesque landscapes most of the foreign participants have or will ever witness in their lifetime. Even some of the Russian and Mongolian locals haven’t had the chance to travel along reportedly one of the prettiest drives in the world. The low-lying mountains are a velvety green with multi-sized patches of trees in various locations on the cliffsides. The texture and appearance harkened to the felted materials handcrafted in Siberia and Mongolia for centuries. Gazing up, outcroppings of rocks make an appearance through the fuzzy grass pelt on the earth’s surface. Before climbing through the alpine, watery fingertips slid into the valleys making up the hundreds of visible rivers, brooks or creeks near which up to tens of tents edged the waterways at any given interval. This week alone the perfect place to camp. Temperate, beautiful, plenty to do and see. Go far enough away and find regal factions of farm animals breaking the mold on how to free-range. Horses, cows and the occasional goat tribe all fat and indifferent about their luxury lifestyle. Contemporary meets classic as farmers and shepherds gathers their flocks and round the herds with small-displacement motorcycles in place of horses. It’s certainly a cheaper option. But it’s an effective tool in modern-day ranching. Deeper still were glamp sites meant to resemble space pods and traditional Mongolian Gers. Instead of one that’s made of yellow brick and infested with monkey birds, dare the Tin Man not to grow a heart after one pass down this two-lane tarmac, divided by, of course, by a bright yellow line. 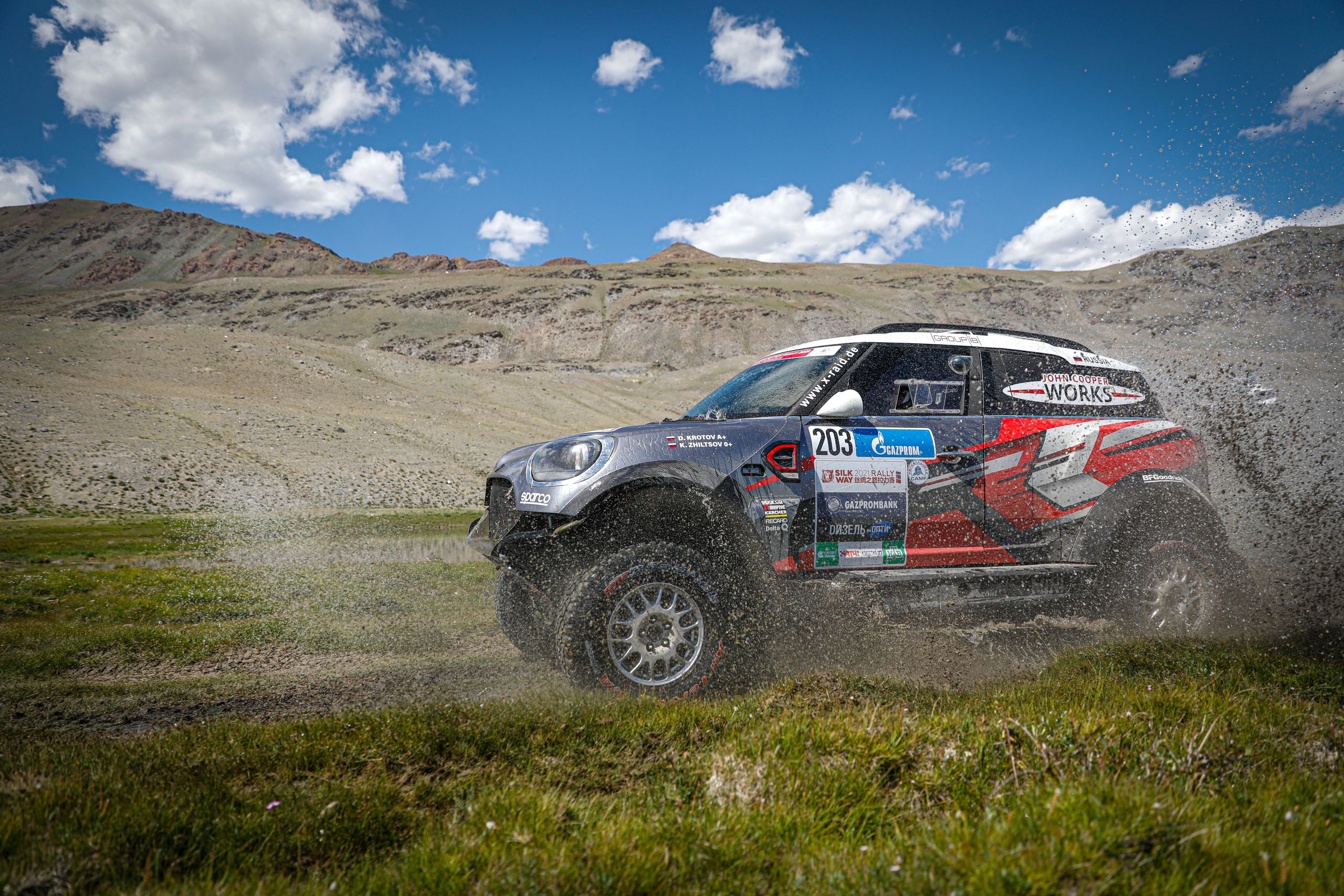 The more remote the village, the quainter – with traditional homesteads which are well-maintained and well-loved by the locals who are lucky enough to live here, let alone visit this place. And then the roadway begins to climb. A fillet knife seems to have carved this intricate winding path through the Altai sierras, so smooth and precise and detailed in its curves. Now, perched above the valley, looking down – if you dare – only shows an alternate breathtaking view of the region. An outdoorsman’s paradise. No. A rally racer’s paradise. It’s so abundant in features, activity that it was easy to forget the event should have been crossing the border today. But instead, in response to the country shutting its gates to in-going and out-going travel – an arguably necessary means to try and control a resurgence of COVID-19 cases – the Silk Way Rally opted for a back-up plan which involved moving up the two marathon stages a few days and keeping the competitors on known (to them) routes for a clean, easy, very last-minute transition, which could keep everyone in awe. 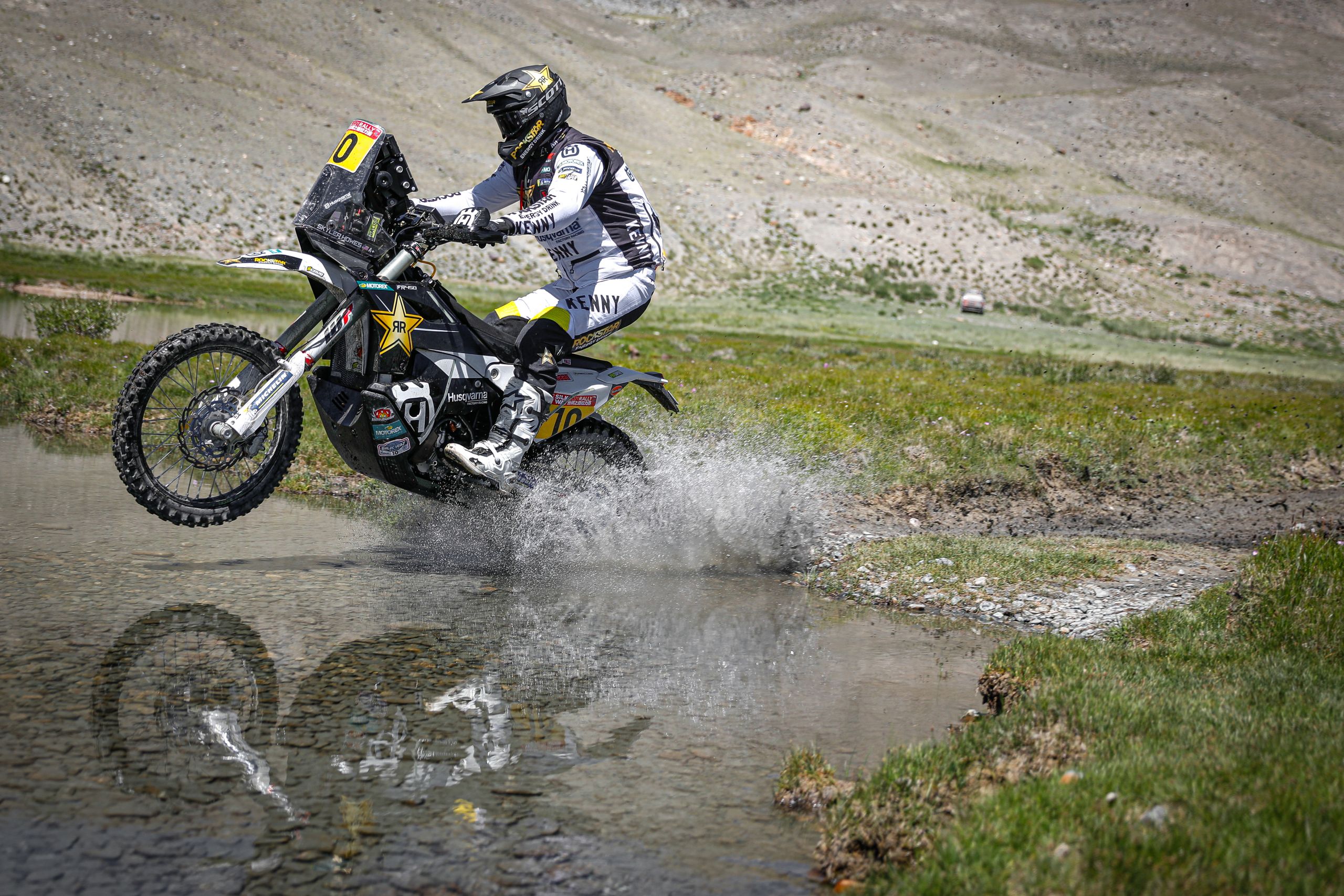 Today, the organizers moved the marathon stage forward in order to give the racers a bit of what they would be missing in Mongolia and an opportunity to continue without skipping a beat. Many were grateful for the opportunity to race even just one more special (let alone have four more to look forward to), which at the Silk Way Rally, is where the landscapes, challenges and competitions really “start to get good.” And while all of the participants showed grace while facing these changing circumstances, and even insisted to the organization that they take action to aid the Mongolian people in some way – in light of the difficulties this country is continuing to suffer and their lack of available resources. Already established as a sponsor to their neighbors, the Silk Way organization is working on a plan to raise more money to help them with their fight against COVID-19. Although just about everybody agreed about how to act fast in this time of need, not everyone agrees about what’s a justifiable use of their time now that the race is officially too short to collect. FIM & FIA points. Several teams chose to conserve their energy, parts and time and depart the competition early. Promising American UTV driver Austin Jones, Gustavo Souza Gugelmin (#400, Monster Energy Can-Am) and the South Racing Can-Am team felt it was more advantageous to go relax after two arduous events in a row – the Kazakhstan Rally and now SWR, be with their families a bit before continuing their never-ending schedule of training and testing. Others like Italians Michele Cinotto and Maurizio Dominella (#403, XTREME PLUS), Yazeed Al Rajhi and Michael Orr (#200, Overdrive Helix Toyota) and Evgeny Sukhovenko and Kirill Chapaev (#208, GAZ Raid Sport) also departed early trimming the roster to a few less contenders. However, that’s not to say the brawl will be any less significant. 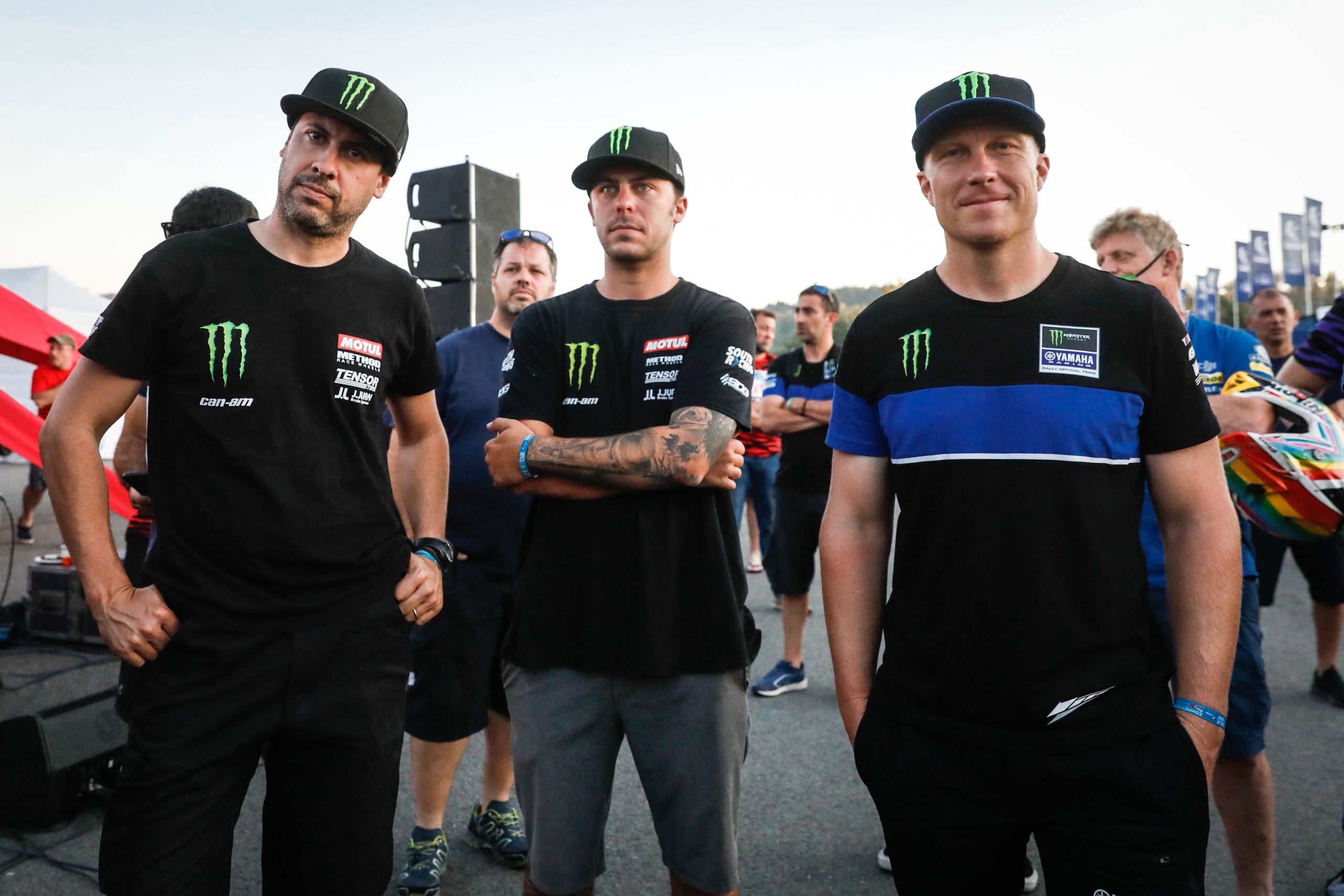 “Everything is good, the wheels are not damaged – this is the most important thing. There is a lot of stones, we went very slowly at the beginning. As I understand, trucks will overtake us, they are moving without problems there. Tomorrow will be the second time on the same surface. We drove into one ford very quickly, set a wave on the hood, stopped there, but in general everything is fine. We are happy with the number of fans, this is an achievement of the Silk Way Rally, I saw the same only in Argentina at the Dakar.” – Denis Krotov, #203, MSK Rally Team

With Yazeed Al Rajhi out of the way, it seems like either Denis Krotov and Konstantin Zhiltsov (#203, MSK RALLY TEAM) who sits in First today or Vladimir Vasilyev and Aleksei Kuzmich (#201, MINI COOPER COUNTRYMAN VRT) at second seed could be a sure bet for a victory, haven taken every daily win so far. But their opponents are still talented and driven, and perhaps having cleared the way of Al Rajhi instead gives teams a smoother path to pull up to the dominant Russian duo, rather than widen the gap. Three more heats – another marathon in the same location plus additional kilometers and new obstacles, a loop and a point to point – means three more opportunities to change the standing order. The T3 and T4 classes still have a lot of skin in the game. In the lightweight category, Anastasia Nifontova and co-driver Ekaterina Zhadanova (#222, Anastasia Nifontova) conceded their top step on the proverbial podium to a few of their colleagues with Frenchman Jean-Luc Pisson Ceccaldi with navigator Jean Brucy (#225, PH Sport Team) at the front. Of the SSVs, Sergei Kariakin and Anton Vlasiuk (#404, Snag Racing) have finally let go their firm grip of the title and let, reluctantly, Matthieu Margaillan and Axelle Roux Decima (#407, Matthieu Margaillan) slip onto the throne, at least for 24 hours. Another sad reminder that Jones could have been kind in Ss3 as the official Can-Am team seemed to get into their groove in the previous round. The thought, of course, is bittersweet. 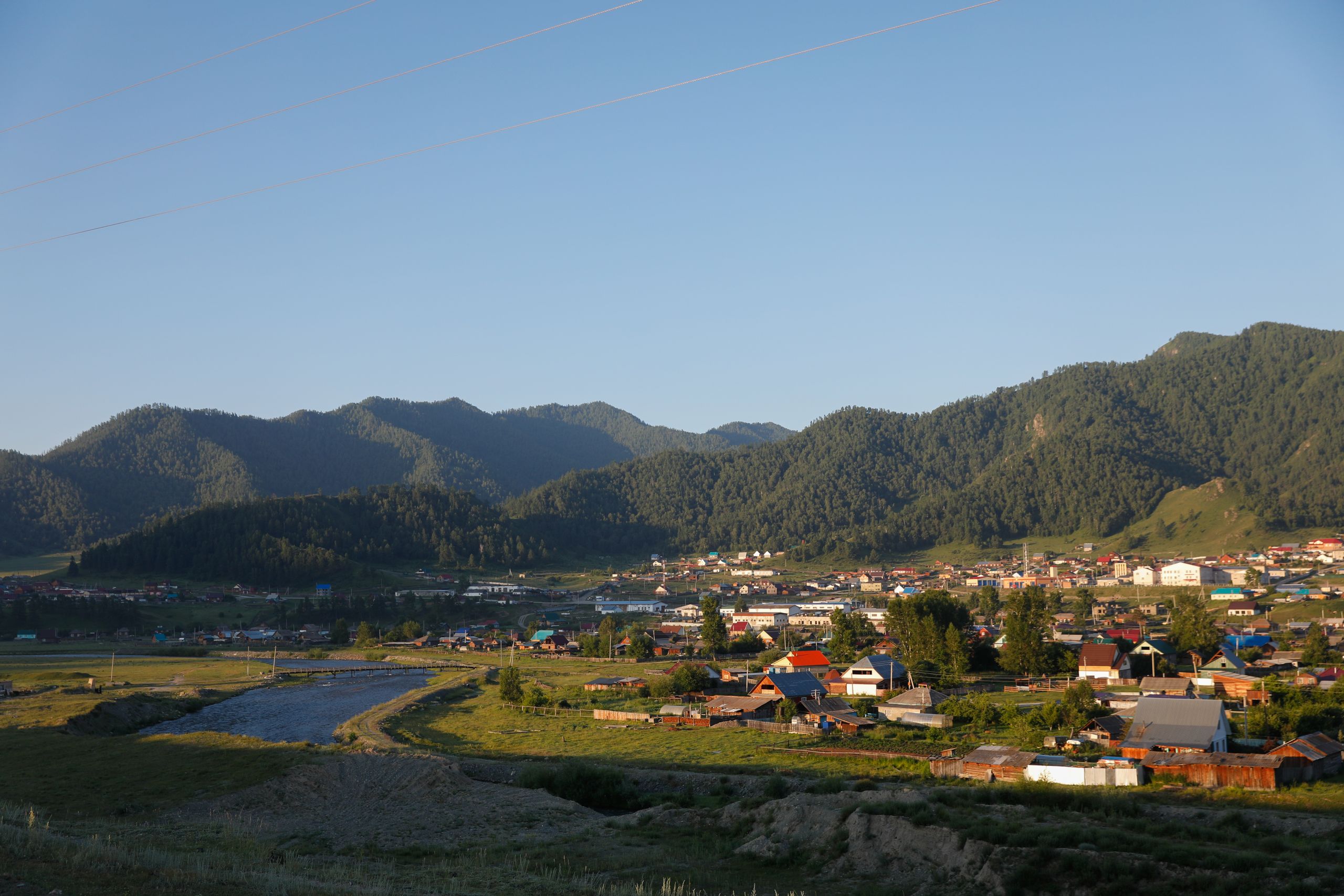 The Autos seem to be an all-out war between the French and Russians, while among the Trucks, it’s so far less about a battle of regions than a massacre by KAMAZ. Whoever’s name is announced last at the award ceremony, a gambling man would wager the recipients will be wearing Red bull blue. Today, it was Andrey Karginov (#507, KAMAZ-MASTER Team) who took the win. He and his comrades Andrew Mokeev and Ivan Malkov left ASS with less than 30 seconds separating them from teammates Eduard Nikolaev, Evgenii Iakovlev and Iskander Romanov (#504). Siarhei Viazovich, Pavel Haranin and Anton Zaparoshchanka (#502, MAZ-SportAuto) are the only men in opposing colors not letting the Russian juggernauts command the rally.

In Bikes, it’s still anybody’s guess who might emerge in the Winner’s Circle by July 6th. No one man or woman has controlled the board for the entire week – with a new champion each day. And that now that the favorite to win, South African with Monster Energy Yamaha Ross Branch (#16), has suffered a mechanical issue which ultimately ended his efforts is “out of the way,” no one can really say which rider is the strongest right here and now in Russia. Red Bull KTM Factory giant Matthias Walkner practical flew to the finish line clearly finding the fast, rolling hills near Mongolia his element. And while USA’s next hopeful for historic triumphs in the rally raid circuit, Skyler Howes (#10, Rockstar Energy Husqvarna), admitted he rode a bit conservatively today, he still followed his KTM cousin closely in the pecking order. Yet fishing Second in two rounds still doesn’t place him Second overall. That spot is taken by Franco Caimi (#2, HERO Motosport Rally Team). Surprisingly, the true American hero we’d wanted to come back to Silk Way and triumph is Andrew Short (#29, Monster Energy Yamaha). On a new bike wearing new colors this time around at SWR, Short has been staying consistently in Top Ten, albeit towards the back. And that’s not for lack of effort. In fact, he’s been riding extremely well, with hardly any issues with the roadbook and zero incidents with the ride itself. However, we’re not sure if in this instance what’s keeping success at bay is the man, or the machine. ” It was a really nice stage, because it was completely different, but a lot of water crossings and the deepest one, when I go down and my bike would stop, and my Road Book is no longer, it’s just difficult. Sometimes it’s good, sometimes it’s bad. Today it was bad for me. I’ll try my best tomorrow.” – Andrew Short #29, Monster Energy Yamaha

Special Stage Three made it all worthwhile. Roadways and scenery which could render the most prolific poets speechless. The long journey gave the athletes time to think, reflect on a short but already full event and why they stayed for a now point-less (but not pointless) event. If any good came from this terrible occurrence happening in Mongolia, would be that the participants of the rally have the opportunity to learn, see and understand more of the Russian Siberia. More on its food, traditions, attitudes and ancestors. The terrain alone gives reason to pack up your skis and take up residence. It’s no wonder why almost every statement quoted at the ASS praised the organization for introducing them not to just one epic backdrop, but three: Low-lying marshlands, a densely wooded forest and this, a massive stretch of mountainous tundra echoing engines sounds for miles. If there’s no other message but this, you can find even at fate’s cruelest tricks. As the Russian old adage goes: “When life gives you lemons, make a vodka martini with a twist.” (Or something like that.) 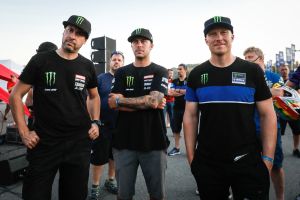 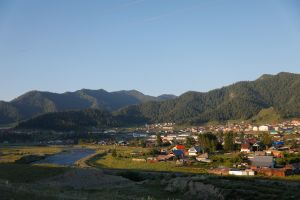 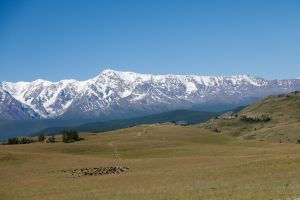 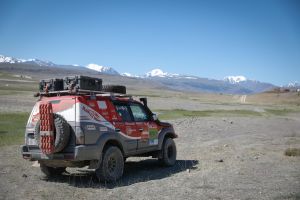 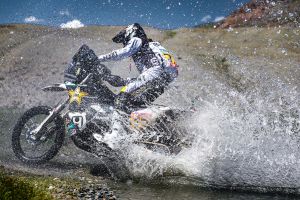 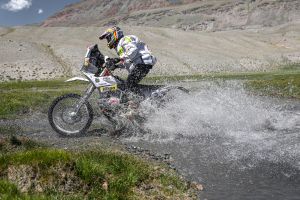 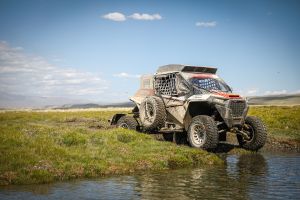 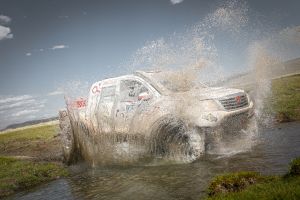 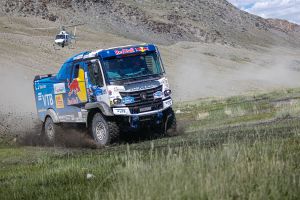