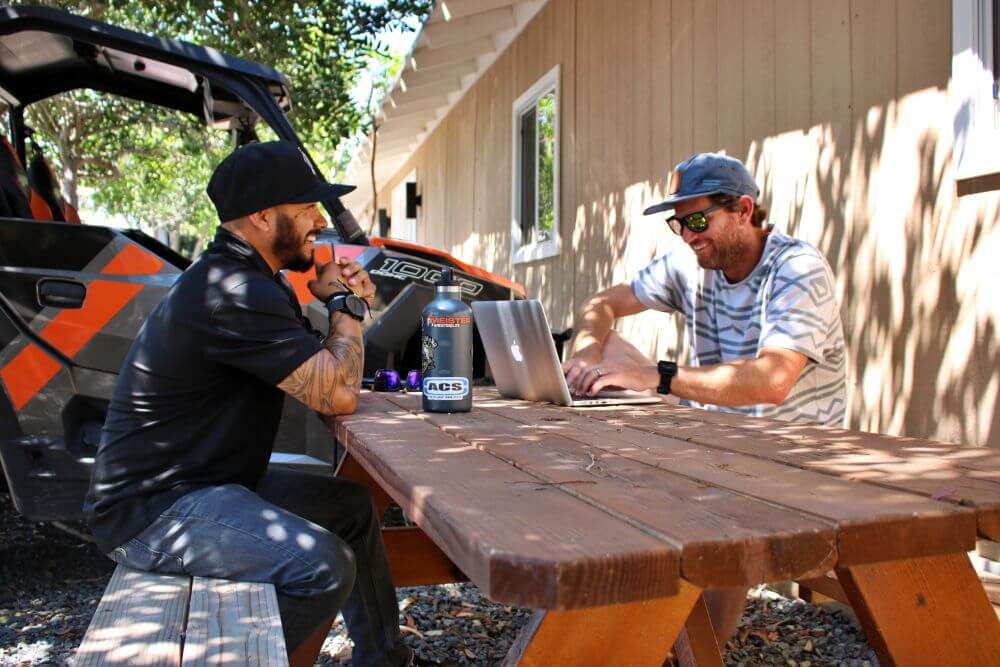 We recently sat down with the CEO and founder of 1Life Trauma Kits to get the inside scoop on the origins of his growing business.

Ok Josh, tell us a little about yourself?

Hey there and thanks for having me! My name is Josh Montoya, I’m 35 years old and the CEO / Founder of 1LTK. I’m an off-road racer, business man and a family guy. Like a lot of SoCal kids I was raised in Los Angeles during the action sports craze but also grew up working on cars in the garage. If I wasn’t skateboarding or at work, I was either in the garage with my grandpa or in the garden with my grandma. Family and hard work were really important themes in my upbringing. My grandpa was always putting me to work! He would tell me if you get hurt, get up and do it again. I currently live in Anaheim, California and enjoy riding my harley and taking my 2016 prerunner out to play in the dirt.

How long have you been involved with off-road/ racing?

From an early age I was always in the garage working on hot rods and builds with my grandpa but really got started with off-road when I was about 18 years old. I went to a trade school in Arizona to learn HVAC and soon linked up with the guys at RPM Off-road (not Geiser RPM) and started working there as an apprentice. My first off-road vehicle was a 1995, 5 lug, Toyota Tacoma Mini, complete with FabTech spindles that made me think I was Robbie Gordon. (Laughs)

What did you do before 1Life Trauma Kits?

Before starting the company 1LTK, I had just moved to San Diego to work as a general field foreman in the HVAC industry. I had no friends or family down here so it was a brand new start. I tend to thrive in uncomfortable positions and was immediately thrown into a leadership role. I was the head guy in San Diego and helped grow this particular HVAC company from 4 to 18 guys. I made a solid impact on the company and built some relationships that will last for a lifetime.

How did the idea of 1Life Trauma Kits become a reality?

(Laughs) I was having a drink one night with a friend, that’s when I came up with the name. She was a nurse and we were talking about a variety of topics about life and how fragile it is. Then I said, you gotta treat it right, you only get one. And that’s how I got the name “1Life Trauma Kits”. That’s the short sweeter version. The real story is… I was racing in Baja, pre running for the 2017 Baja 500 in a UTV with my good friend Kevin Adler. Everything was going great and it was a relatively easy day for Baja standards. We had hit the coast and pre-ran the well traveled section from Ensenada to Urapan. I was in the passenger seat and we were in a good flow, developing a solid driver/ co-driver rhythm. Around 1pm we took a soft right turn that shot the car into a roll over. I instinctively grabbed my harnesses and braced for the spin cycle. When the UTV rolled over, it landed with the drivers side down. Even with my earbuds in, I heard an uncanny pop as the car hit hard on its side. The car slid about 10 feet before coming to a rest with Kevin’s arm caught underneath the door bar. Kevin had a serious compound fracture from the crash. Given the severity of the injury, bone sticking out of the skin and no help around for miles, I knew time was of the essence if I was going to save my friend. I managed to jack the vehicle up high enough to get Kevin’s arm out but that ushered in the next life threatening situation.

As soon as I got his arm free, he started to bleed out, pulsing large amounts of blood into the desert. The smell of blood mixed with dirt and the mess of mangled human meat is enough to make a grown man pass out, that’ll stay with me forever. But I had to stay focused on the task at hand. I realized we needed a tourniquet asap. Around the same time I got his arm free, another race team pre-running the course arrived on the scene and stopped to help. I found a ratchet strap amongst the wreckage and used a knife to quickly modify the strap and then cranked it down hard on Kevin’s mangled arm. The other team helped upright the car with the injured Kevin still inside the vehicle. The other race team luckily had a first aid kit so we wrapped the arm with kerlix gauze. Next we moved Kevin into the passenger seat of the UTV and began the long journey out of there. By this time, a call had been placed to race ops for a medic to meet us at race mile 150. We were at race mile 148 and although we only had a couple miles to go, it seemed like forever. With Kevin going into shock, all I could do was talk to him and reassure him that he was going to make it. I was asking him super random questions just to keep him conscious.

It took about 20 minutes to drive the 2 miles to race mile 150 where help was waiting. It always amazes me how the off-road community comes together and rallies in situations like these. We had a ton of help from a number of amazing people with phone calls, translation and support . Of course the medic showed up to meet us at race mile 150 in a beat up, rusted out 1995 suburban. He quickly realized he was in over his head and called in an actual ambulance for back up. This ambulance transferred us to a clinic in the town of Vicente Guerrero that looked like a low budget pet motel. I will never forget the huge trail of blood that went from the ambulance to the meager clinic room. With the help of a translator, the clinic informed us that my friend needed a blood transfusion and they only had 2 liters of his blood. The clinic also let us know that it was not a trauma center and that Kevin would absolutely lose his arm and quite possibly die if he wasn’t treated at a top notch facility and soon. The next scene was like something out of the movie Scarface with a plane landing in a strawberry field and the crew removing the seats to load in suspicious cargo. One important fact to know about Baja is that planes stop flying once it’s dark and by the time they landed in Ensenada it was already 7pm. Once again the racing community rallied and pulled some major strings to get the injured racer across the border and to Sharp Hospital in San Diego.

So what happened next?

Well, we obviously called off the rest of the pre-run as the main focus was on our injured friend. He would end up spending a couple weeks in ICU and then have multiple surgeries and hospital stays to fix him up. But, with the majority of the team still in Baja and in true racer fashion, we decided to push forward and not give up, even though we were down a driver. We owed it to Kevin and knew it was important for our own head space to continue on and race. Since I had pre-run most of that top section I felt confident to be the one to drive that portion. (Laughs) That played out way better in my head than real life. I ended up rolling off a 10ft drop off and luckily didn’t hurt myself or my co-driver. I was super bummed on myself for crashing and letting my team down but they didn’t give up on me, or the race. The team put the Class 7 back together in about 3.5 hours and threw me right back in the driver’s seat and said keep going. We ended up timing out of the race but never gave up and never quit. Unfortunately, we DNF’d.

When did the idea of 1LTK come to you?

After the race I was processing the crazy chain of events that had happened and was just processing the whole situation. I realized I needed a new safety protocol if I were to ever go off-roading, let alone racing in a remote area again. My thinking had changed drastically after the crash and I never wanted to be unprepared like that again. I will never go remote without a sat phone, trauma kit and a spot tracker regardless if it is Baja or the local desert. The other key lesson I learned was the importance of properly mounting gear to keep close in the event of a crash. As soon as I developed a rough plan, I reached out to a buddy of mine who is a firefighter and Afghanistan combat vet. With his advice and expertise I put together the first kit. I knew we needed a compact, durable case and with his help we figured out what would go inside. We picked the most essential and practical items that would fit.

How long has 1LTK officially been in business?

We officially started in January of 2018. We did extensive product research and found the best items for the kit. For the first marketing push we made about 20 kits and took them down to the Baja 1000 for teams to try out. We pretty much just gave them away to friends and fellow racers.

Where can someone buy one of the kits?

You can buy the kits directly from us at 1lifetraumakits.com or you can also pick them up at all Off-Road Warehouse locations and from the crew at LGE-CTS.

In your opinion what’s the single most important part of the kit?

What other products do you offer?

We offer the standard 1LTK first aid kit that we started with but you can also purchase the tourniquet separate, as well as the new Active Shooter Kit for classrooms. Our website also has some cool how-to videos that are a great reference and learning tool.

Who are you working with/ sponsoring?

Our kits are on a number of race vehicles from teams like Concrete Motorsports, McMillin Racing, Ampudias, Menzies Motorsports, Shoup Off-Road, Racing 905, Shreddy, Eisenhower Bro and Darren Parsons are using the kits on their race vehicles. We also have our Active Shooter kits in classrooms at the Fab School.

What’s next for 1Life Trauma Kits?

Right now we are focused on growing the business by getting the kits in retail shops and other distributors. The boating industry is a huge market for us to go after and the kits fit perfectly on watercraft. We are working on getting the products in Bass Pro Shops, boat dealerships and more race shops. Getting the new Active Shooter Kits into schools is another big part of our focus. Ultimately, we want to provide a solid solution for racers, boaters, schools, and anyone that understands the importance of being prepared.

For the latest products and more information go to 1lifetraumakits.com