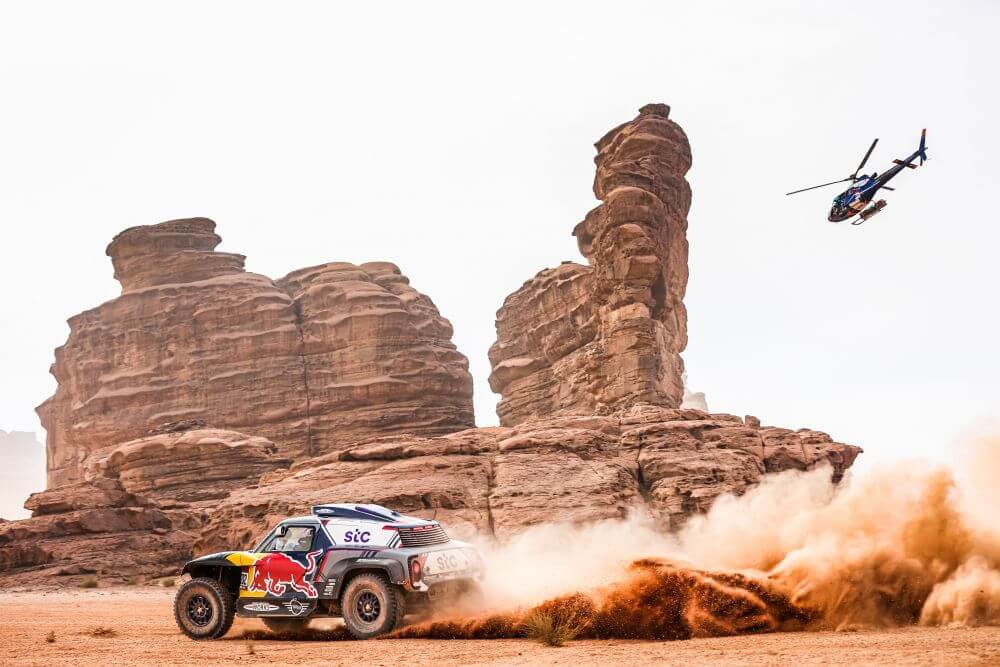 Soudah Development (SD), a closed joint-stock real estate development company owned by the Public Investment Fund of Saudi Arabia, has become the main partner in one of the world’s toughest endurance motorsports: the Dakar 2022 in Saudi Arabia. The sponsorshipreflects SD’s commitment to promote extreme sports and adventures under its vision to create a luxury mountain tourism destination in Soudah and parts of Rijal Almaa.
Setting the pace for the Kingdom’s burgeoning sports scene, Dakar 2022 in Saudi Arabia will welcome international competitors. Drivers will navigate a challenging 8,000km journey across vast swathes of desert terrain, travelling through Ha’il, Riyadh, Jeddah and the Asir region where SD is based in the quest for glory.
Dakar Rally in Saudi Arabia 2022 is the first motorsports competition SD has sponsored since it was established by His Royal HighnessCrown Prince Mohammed bin Salman Al Saud, Chairman of the Board of SD. It will invest SR 11 billion to establish world-class infrastructure and tourism projects under plans to develop 2,700 hotel rooms, 1,300 residential units, and 30 commercial, entertainment, sports and adventure attractions.
Sponsoring the hardest race in the world aligns with SD’s efforts to create a luxury tourism destination high above the clouds and attractmore than two million tourists throughout the year by 2030. The mountains in Soudah and parts of Rijal Almaa boast a formidable legacyin extreme sports and adventure with its high altitude and cool temperatures providing an ideal environment for a wide range of adrenaline-fueled activities.
Dakar Rally 2022 will also be the first of many local, national and global events SD will support to highlight the immense sports, entertainment, wellness, relaxation, cultural and heritage offering the destination offers to both domestic and international tourists.

His Royal Highness Prince Khalid Bin Sultan Al Abdullah Al Faisal, Chairman of the Saudi Automobile and Motorcycle Federation and Saudi Motorsport Company, said: “As a key driver of sports and entertainment in Saudi Arabia, we are proud of our valuable partnership with Soudah Development. Dakar Rally is one of the toughest motorsports in the world and we are excited to bring it back to the kingdomfor the third year in a row and look forward to welcoming sports fans from all over the world. He added: “Our partnership embodies the vision of the Custodian of the Two Holy Mosques, King Salman bin Abdulaziz Al Saud, and HRH, Crown Prince Mohammed Bin Salman. Through the support of HRH Prince Abdulaziz Bin Turki Al-Faisal, Minister of Sport, we have ensured continue success by spearheading local collaborations and supporting global sporting events that deliver on the goals enshrined by Vision 2030.”

Hussam Almadani, CEO of Soudah Development, said: “We are delighted to announce our partnership with the Dakar Rally 2022, a high-octane motorsports contest that will accelerate the Kingdom’s position as a global extreme sports hub. We share many of the same values as the organizers: both of us care deeply about the environment, reducing carbon emissions and supporting local communities. As such, we are thrilled to become the main partner of this exhilarating race as efforts to create a luxury mountain tourism destination high abovethe clouds go up a gear.”
He added: “We are working hard to transform Soudah and parts of Rijal Almaa into a year-round tourism and entertainment destination. Visitors will be transported from a day of wellness and reflection to another full of adrenaline-fueled adventures such as paragliding and hiking in the clean air and cool temperatures of this high-altitude destination. As the Kingdom sets the pace with world-class sports eventsin the region, we want to ensure our destination is recognized as an attractive destination for extreme sports and adventure seekers. Wecan think of no better partner to accelerate this and share the unique culture and heritage of the region than the team at Dakar Rally.”

Yann Le Moënner, CEO of A.S.O, said: “Thanks to the Dakar partnership with the Kingdom of Saudi Arabia, competitors and viewers fromall over the world have been able to admire the beauty and diversity of Saudi landscapes over the past two years. They discovered a land of contrast made for adventure and extreme sports. We are therefore particularly happy to welcome Soudah Development as a Main Partner of the event in order to jointly promote sport and tourism while supporting our project of developing an ambitious energy transition program”.

Dakar Rally will support local communities in Saudi Arabia and reduce its carbon footprint by using renewable energy to power the bivouac, a temporary camp, and offset event emissions. The new T1-Ultimate class has also been approved for the rally, allowingmanufacturers to develop a blend of vehicles with electric, hybrid or hydrogen engines that are better for the environment.
For its part, SD has a number of initiatives to support the local community and plans to create more than 8,000 full-time jobs by 2030. It has also announced plans to plant more than one million trees by 2030 under its sustainable development program. This is in line with the Saudi Green Initiative, which aims to reduce carbon emissions by 4% and raise protected areas to more than 30%.

The 44th Dakar Rally is organized by A.S.O. in partnership with the International Automobile Federation, The Saudi Arabian Automobile and Motorcycle Federation and other local authorities.