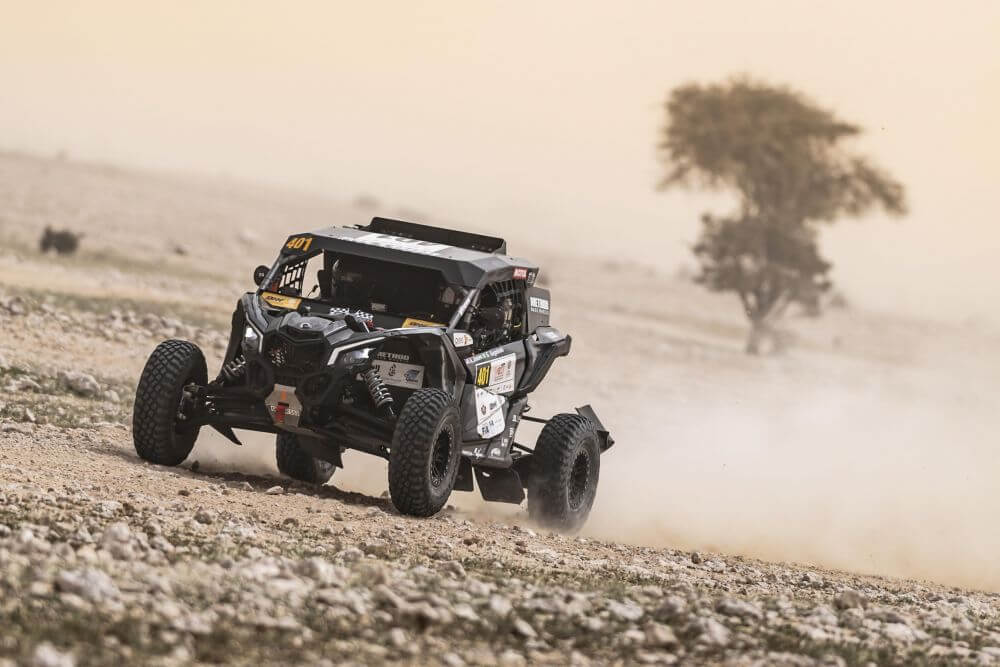 American driver Austin Jones and his Brazilian co-driver Gustavo Gugelmin showed an impressive turn of speed in their T3 South Racing Can-Am Maverick X3 to win two of the five legs of the Manateq Qatar Cross-Country Rally, the opening round of the 2020 FIA World Cup for Cross-Country Rallies.

An unfortunate collision with Yazeed Al-Rajhi’s Toyota in a sand dune, when Jones was holding second overall, running second on the road and holding a massive lead in the T3 category, spoiled what promised to be a sensational weekend.

But the South Racing mechanics repaired the damaged Can-Am and Jones knuckled down over the last two days to show his rivals a clean pair of heels with some impressive driving, despite a mechanical setback on the last day. He reached the finish in Doha in 14th overall and 10th in T3 and collected additional bonus points for his stage performances.

After the final stage, the 24-year-old Jones said: “We were cruising at a good pace and in a good rhythm, Then, the brake disc bolts broke off and we had a bit of trouble. We had to stop and disassemble the entire rear end. We had all the bolts and all the tools. It took us about 45 minutes. Then, about 10km from the finish, we had a bolt fall out of the upright on the same side. We finished the stage and fixed that before the liaison. The two stage wins were awesome.”

South Racing Can-Am Team’s Scott Abraham, added: “It was a great race and Austin and Gustavo did a phenomenal job. Day one, second, and on day two they put 20 minutes on the entire field. Unfortunately, they had the accident with Yazeed Al-Rajhi on day three that threw them out of contention for the race.

“He came back very strong on leg four, won the stage, and today he was leading until we has an unfortunate mechanical with the brake disc. He showed on Dakar and he has reinforced here, that he has the pace to run at the front. It’s just a pity we could not go home with the victory. This was a race where the full points were possible. We know that all the Qatari drivers are not going to be racing the full FIA World Cup, but to come off this with what we have is a little frustrating.”

The team’s challenge for honours is supported by Method Race Wheels, Motul and OMP.

Jones started strongly in the short opening selective section of 171.25km and was the quickest of all the T3 runners through the first two checkpoints. He eventually reached the finish in second place, 35 seconds adrift of Khalid Al-Mohannadi and well placed to attack on the longer second section of 334.25km.

Jones said: “I drove at 50% all day. I just wanted to get a good groove with my new navigator. We rode about four kilometres together the other day. That is all. I drove slow, we took our time and wanted to see what the rest of the competition was about. Now we know where we are at, second place is good and we are excited to get it going for the longer stages. It’s hard to read the terrain. It’s all the same colour and very challenging. It’s hard to drive. I cannot imagine trying to navigate.”

Day two’s stage of 334.25km was an excellent one for Jones and the American recorded the second fastest time behind outright leader Nasser Saleh Al-Attiyah to storm into second place overall, 1min 38sec in front of Yazeed Al-Rajhi. The performance also earned the Can-Am driver a lead of 19min 08sec in the T3 category.
A delighted Jones said: “It was a good one – hard, long and rocky. I had a little bit of trouble with the steering in the car, so I had my hands full all day. There was lots of attrition with cars everywhere. It was insane to hear that I was second. That’s awesome. The plan was to go out there and gap them a little bit. We were more than happy with that. It was tough though.”

The third Al-Kharsaah selective section was the longest of the event at 340.28km and Jones began strongly from second position on the road. It was going well until he scaled a dune and decided to reverse in the soft sand at the same time as Al-Rajhi’s Toyota was arriving. The two cars collided and the damage to the rear suspension of the Can-Am was substantial.

The crew took 45 minutes making temporary repairs with ratchet straps and the fix held until the closing few kilometres of the special, when it unravelled and the American was stranded in the desert haemorrhaging even more time. He duly incurred additional time penalties and plummeted out of T3 contention.

Adverse weather conditions forced rally officials to cancel one of day four’s two stages and reduce the competition to just 119.39km in a windy and dusty environment. South Racing mechanics had rebuild the Can-Am at Lusail and Jones pushed from the start to record an impressive stage win.

He said: “I am really happy with that. That is definitely what we wanted to do. Obviously we don’t have much to lose, so I was not going to lift my foot off the throttle the entire time and that’s what happens. The wind actually affects the T3 quite a bit. It shakes it around, more so on the highway on the liaisons. It is actually pretty gnarly in the stage and you can feel it shaking back and forth.”

Adverse weather was forecast for the final day as well, with a stage of 254.58km scheduled before the evening finish at Souq Waqif in downtown Doha. But Jones started well and was well ahead of his rivals until the brake disc issue.

The FIA World Cup for Cross-Country Rallies resumes in Abu Dhabi in March.

$35,000 Up For Grabs at the Alumi Craft Class 10 Shootout Previous post
Are you prepared for the MINT 400? Next post