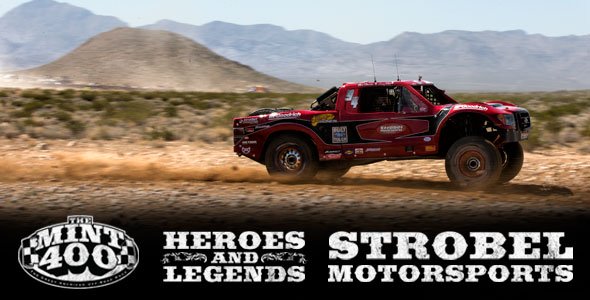 Strobel Motorsports: Heroes and Legends of The Mint 400

The father and son team of Strobel Motorsports is made up of a family of passionate racers, mechanics and fabricators. For the Strobels, the journey to The Mint 400 and their love of off-road racing began in 1974 over 1200 miles away. Strobel Motorsports is located in Central City, Nebraska.  Their shop is an old building that was originally going to be a furniture repair shop. Over a couple years, the Strobels turned it in to a full on 10,000 square foot race shop.

In 1974, a friend from Denver, CO called Dwight Strobel and said he had a single seat Funco with about five inches of travel on it. He said he was going to Mexico to race the Baja 500. Dwight had no idea what he was talking about and being a car guy, thought it was going to be easy. Dwight loaded up the family and headed to California and in to Mexico and of course, it was a rude awakening being from Nebraska. From that point on, the Strobels have been off-road guys.

The Strobels continued their passion for the sport and started building a Baja bug, planning loads of pre-running trips in Mexico and eventually bought a Class 10 car. Through the years they made the leap and had Jimco build them a Class 1 car, with the ultimate goal of buying a Trophy Truck. The Strobels have now been racing in the Trophy Truck class for about four years.

Having their main shop out of Nebraska speaks to the passion Strobel Motorsports has for the sport. This year they bought a shop in Las Vegas to house some of their assets but continue to bring the truck back to Nebraska. Nebraska is home and Las Vegas is where they race.

The father son duo of Dwight and Steve Strobel is a perfect fit. Dwight handles the majority of the truck prep and if he wasn’t as involved, Steve feels he simply couldn’t do it. “I’ve got businesses to run and he essentially handles all that. I get the cool part of showing up, putting my helmet on and going racing. It’s key to the success of our team to have him there. My job is to go make a living for us so we can go do this,” said Steve. For Dwight, it’s a dream for any father to spend the time with his son and do it at a level that very few people get to do.

It’s the thrill, the adventure, the challenge of building a race truck that can live through that terrain that do it for the Strobels. The last two years, the #94 Trophy Truck has finished every race mile and it’s the buys behind the scenes that make it all happen. It’s all the pieces coming together that allows Steve to drive with confidence, and Strobel Motorsports has that right now.

Steve Strobel is very soft spoken. He has immense confidence that when he races, he’s going to win. However, he’s not the type of guy that will taunt that to the world. He has a huge amount of respect for his competitors and knows he is running with the best, which drives him to go to the races.