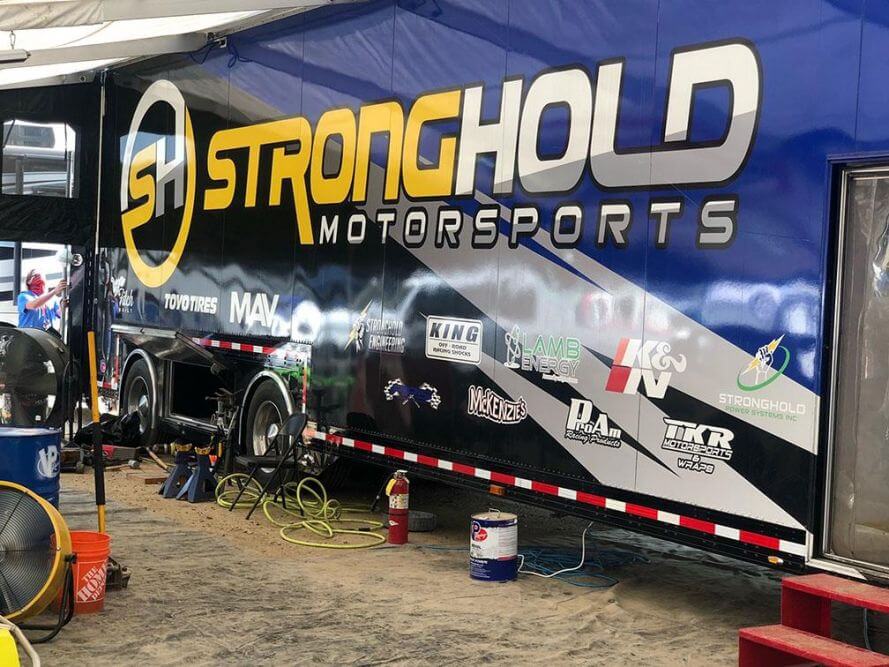 Stronghold Motorsports closes out the Championship 3rd in points

Devore, CA
The bookends to a story of highs and lows that began and ended at the famous Glen Helen Raceway in Devore, CA… gave way to the Stronghold Motorsports Team’s 3rd Place in the Championship.

The Stronghold Motorsports team started the year with a lot of high hopes, unease for the future, and optimism for the team. How was their season going to start or end? How was their new Pro Lite driver going to overcome the nerves of his debut? How was the team going to manage and race in the midst of a global pandemic? For the Stronghold team it turns out…just fine in the end.

Seated at the Driver’s seat for his Pro Lite debut was Madix “Madman” Bailey. Madix comes from a long line of racers as the Bailey family has managed race teams and raced in the industry for years. Following in the footsteps of his Grandfather Scott Bailey and his father Brandon Bailey, Madix has what it takes to be competitive…and even more, he has what it takes to win. In his rookie season, Madix saw a lot of 2nd, 3rd, and 4th place finishes. Never finishing worse than 6th place, Madix has been able to set his sights high and achieve the goals he set for himself in his first year.

Winning the Rookie of the Year award for 2020, Madix “Madman” Bailey has made a name for himself. He explains, “Going into the 2020 season, my goal was to obtain the Rookie of the Year Title and try to get our team to 5th in the points…needless to say, I achieved better than I had hoped with 3rd place in the Championship. I didn’t know what to expect and my goals for the next season are even bigger…I want that Championship title.” Knowing Madix, those words don’t come lightly.

Heading into the final rounds of the Lucas Oil Off Road Racing Series (LOORRS) the Stronghold Motorsports team had their work cut out for them. With all the hopes of trying to clinch the Championship, it would be a rough weekend for the Stronghold team. Friday’s race had Madix trying to overcome adversity with numerous race incidents that unfortunately ended his day with a 6th place finish. Saturday’s race had even more tension as the teams #29 would continue to battle through the pack having a not so great start and running between 6th and 7th place…somewhere in there Madix was able to sustain a 6th running the last 2 laps on a flat tire. Screaming into the finish on a rim, he was able to secure the 6th spot and obtaining enough points to put that Stronghold Motorsports team on the Podium for a Bronze finish in the Championship.

Irie “Love” Bailey, the driver of the Stronghold Motorsports team’s JR2 Karts #429 had a rough weekend at Glen Helen. A couple car issues, and some race mishaps had Irie working hard and finishing in the 10thspot on Friday and 9th on Saturday. In her debut year driving the teams #429 Kart, Irie has been able to make up a lot of ground for her rookie year. As Irie puts it “My year had a lot of ups and downs, but overall it was a great rookie year for me. I learned a lot of different things and got some great experience. My first ever 3rd place podium finish in Wheatland, MI was the highlight of my year. I am grateful to my team and everyone who helped me throughout this year.” Irie finished off the year in top 10 in points. One thing is for sure, Irie has the passion and the skills to be a contender moving forward.

This year at the culmination of the season, Lucas Oil Off Road Series teamed with Stronghold Motorsports and Loma Linda University Children’s Hospital to continue the effort to combat Pediatric Cancer and other Childhood Illnesses. The initiative #Hoods2Help campaign involved many of the young children currently facing the unimaginable battle of pediatric cancer, with the opportunity to design the graphics that were featured on the race trucks for the last 2 rounds of the LOORRS series. 44 special children colored and designed various trucks, some were selected and wrapped on the trucks that raced on Saturday. A silent auction took place with all the proceeds benefitting the Loma Linda University Children’s Hospital.