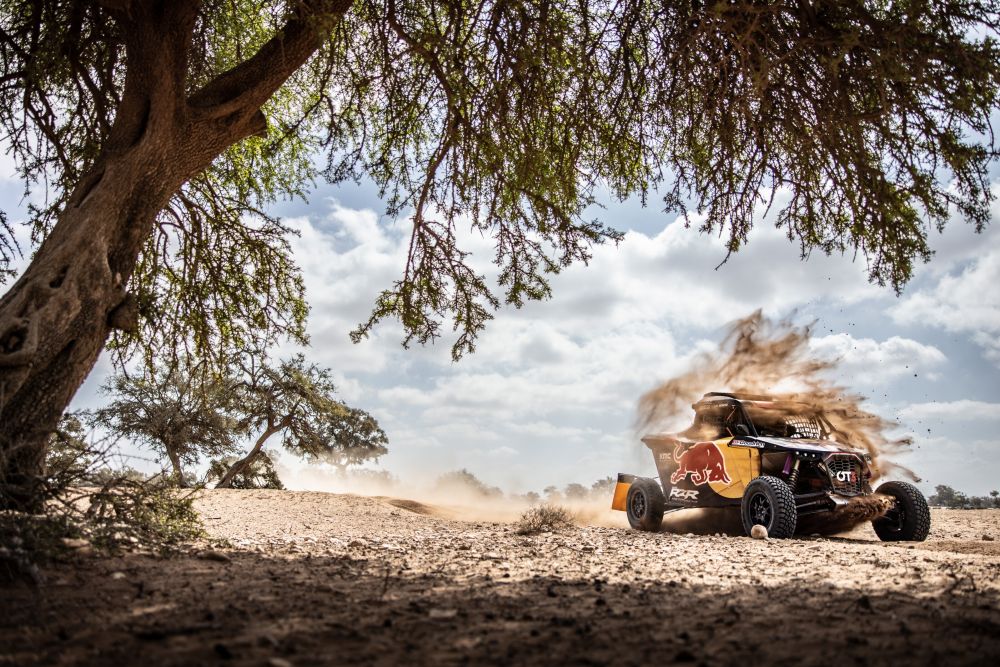 Seth Quintero turned on the afterburners to set an unbeatable pace on Stage Three of the 2022 Rallye du Maroc. After racing nearly 1,000 kilometres in North Africa, the Red Bull Off-Road Junior Team also have Guillaume de Mevius hunting more stage wins and Cristina Gutiérrez joining Quintero on the overall podium. Along with Mitch Guthrie Jr., all four OT3 drivers are out to further dominate the dunes during the final tough two days in Morocco.

Dakar Rally history maker Seth Quintero showed unstoppable speed over the racing distance of 300 kilometres on Stage Three. Not only did the 20-year-old comfortably win the T3 stage, he went faster than many T1 Car Class contenders – including the Audi RS Q e-tron Evo 2 of 14-time Dakar winner Stéphane Peterhansel. The latest stunning performance from Quintero and his Red Bull Off-Road Junior Team co-driver Dennis Zenz put their OT3 just 47 seconds behind category leader Chaleco López. Quintero was able to take nine minutes out of López’s lead on Stage Three, giving himself two days to wipe out the remaining three quarters of a minute that stand between himself and top spot.

“I had an absolutely stunning day today, a lot of fun! We started off very strong and held our pace all day long. Glad to walk away with the win and be back in the overall hunt.” – Seth Quintero As the temperature rises during the final two days of rallying in Morocco, watch out for Gutiérrez and co-driver Pablo Moreno steering their OT3 towards some serious championship points.

“We’re happy with the consistency we’re showing at this race because that’s the most important thing in rally-raid. We now want to stay strong until the end.” – Cristina Gutiérrez

Even more success this week for the Red Bull Off-Road Junior Team has been delivered by Guillaume de Mevius. Thanks to his T3 stage win on Stage Two, De Mevius has now picked up stage wins at Rallye du Maroc, the Abu Dhabi Desert Challenge and the Dakar this year. De Mevius and co-driver François Cazalet are currently sixth in the T3 rankings in Morocco and have two days left to target the overall podium.

“We’re happy with our stage and now we’re looking to enter the Top 5 of the T3 category before the end of the race.” – Guillaume de Mevius

There’s also been great speed on display from Mitch Guthrie Jr. as he plays his part in maintaining the team’s attack on the sharp of the leaderboard in North Africa. Guthrie Jr. and co-driver Ola Fløene took the fight to their rivals on Stage Three to finish as the fifth T3 in the overall rankings.

“It was a perfect day for the car and driving felt good. We’ll look to comeback strong for tomorrow.” – Mitch Guthrie Jr.

There’s still close to 650 kilometres of racing against the clock to complete before the chequered flag falls at the Rallye du Maroc. With 346km to race tomorrow and 290km on Thursday’s final stage, our young team remain fully focused on celebrating more success on the finish line in Agadir on Thursday, October 6.