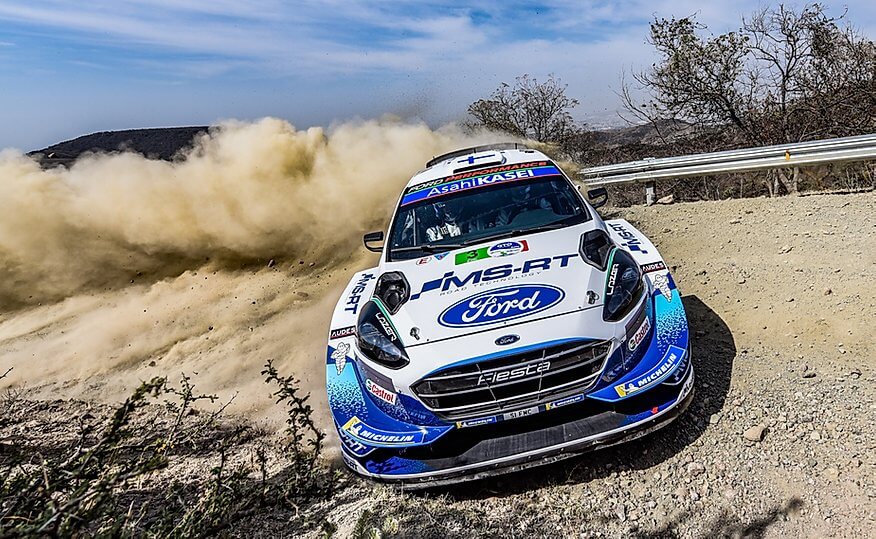 M-Sport Ford World Rally Team’s Teemu Suninen and Jarmo Lehtinen have secured their first podium of the year at this weekend’s Rally Mexico – piloting their EcoBoost-powered Ford Fiesta WRC to the third step of the podium.

Highlighting their potential with the fastest time through the first pass of Thursday’s Shakedown, the Finns continued to impress and upheld their strong performance with pace and consistency throughout the weekend.

Locked in an intense battle for second place with reigning World Champion Ott Tänak, Suninen more than held his own through today’s final stages and was on course to keep the Estonian at bay before picking up a brake issue through the closing kilometres.

Losing the brakes on the second pass of Derramadero (SS18), the young Finn was forced to relinquish the fight but managed the issue through the final spectator stages to secure a thoroughly deserved podium – the third of his career so far.

Gus Greensmith and Elliott Edmondson had also been on course for a strong result – holding sixth place before a sensor issue brought their Fiesta to a halt two kilometres into the first pass of Alfaro (SS14).

Dedicated to learning the mechanics of their top-specification Fiesta, their commitment paid off as they were able to find and solve the issue with spares carried in the car. But the damage had already been done and they dropped more than 10 minute to the leading pack.

Ending the rally in ninth place overall, the pairing had hoped for more but gained a wealth of experience and showed good progress through this afternoon’s stages – coming out on top in two head-to-heads on the closing Super Specials.

“It’s been brilliant watching Teemu this weekend. He had a tough start to the season, but we all knew what he was capable of and this is the confidence-boosting result he needed. From the second he got in the car, you could see his intent and he maintained that speed and consistency all weekend. He has fully regrouped after a disappointing start, and it really was great to see him showing the pace and performance of the Fiesta this weekend.

“Gus didn’t quite find his rhythm, and after the issues this morning it was all about getting through the stages and racking up the experience. He had two great head-to-head wins on the Super Specials this evening which I think he enjoyed – we certainly did. I know he’ll be a bit disappointed, but it’s not been a bad weekend for him and I’m looking forward to seeing what he can do when he gets back behind the wheel.”

“I’m really happy with what I was able to do here this weekend, and really proud to bring this good result home for the team. After Sweden it wasn’t looking too good and the bosses were asking for some more pace! Then I switched the switch and was able to come back a stronger man – back on the good pace, and back challenging for the top results.

“I think it was a good drive from me this weekend and we were able to be really consistent which was important. Of course it would have been nice to have taken the second position, but Ott was driving really fast and we had some brake issues that we had to manage.
“Still I think we have shown that the potential is there, so let’s see what we can do in the next rallies.”

“It’s not been the weekend we wanted. Going into the rally we felt really good, but I just haven’t had the feeling and made too many mistakes. I would drive one good kilometre, and then one bad kilometre, and that time just adds up. But things were getting better and I really started to enjoy myself this afternoon. I’ve still got lots to learn, but we’ll get there – we’ve just got to keep at it.”