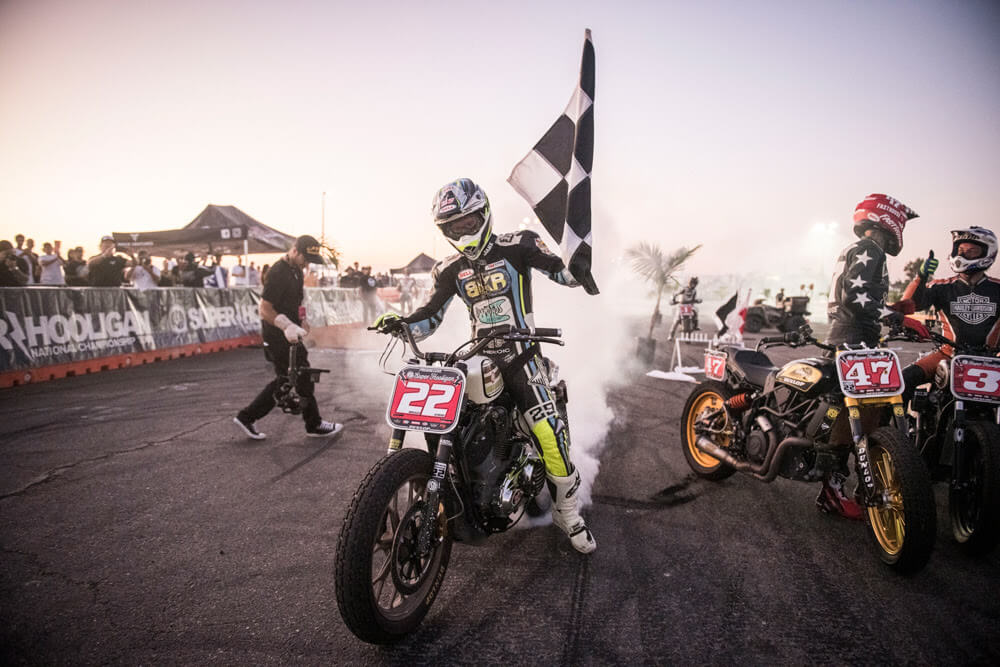 The Mint 400 announced today that Roland Sands Design will bring their Super Hooligan Flat Track series to The Mint 400 Start/Finish Line Midway on Friday, March 6th and Saturday, March 7th. The races will take place entirely on a pavement course designed for street legal bikes like the Indian Scout, Harley-Davidson XG750, and the Ducati Scrambler.

Combining the craft of custom motorcycles and racing, the Super Hooligan rules are loose and limit the bikes to 750CC and up twins in stock frames with dirt track tires and no front brakes, making the racing extremely exciting for fans and spectators.

The spirit of hooligan racing comes from when you raced – and could ride home on – any bike you owned. With its roots in Southern California motorcycle culture, today’s flat track hooligan racing category is rapidly gaining in popularity with riders of all ages and experience levels across the nation by offering the fun of motorcycle competition in a less structured environment.

“We’ve been watching Super Hooligan racing growing over the past few years and feel that it embodies the same punk rock spirit of The Mint 400,” commented Mint 400 CEO Matt Martelli.

“Roland Sands has built a great series and more importantly, he is a principal leader in motorcycle culture. Joining forces with Roland Sands Design was kind of a no brainer, especially after the success of the hooligan class racing in the desert with us last year. We look forward to putting on a great show for current and new fans alike.”

“Holy smoke shows. Super Hooligans at the mint 400!!!! It’s like tearing a page out of Hunter S. Thompson’s Fear and Loathing. “Buy the ticket, take the ride!” A salute to the fantastic possibilities of life in the country but only for those with true grit. And we are chock full of that!!”

100 or so, Hooligans smashed together with thousand horsepower race trucks and rabid Off-road fans feening for the next moment of two-wheeled greatness. It’s a mix made in heaven or hell, depending on how your prior evening went. But the SHNC will be there in force. Ready to race and entertain. Let’s get rowdy!”