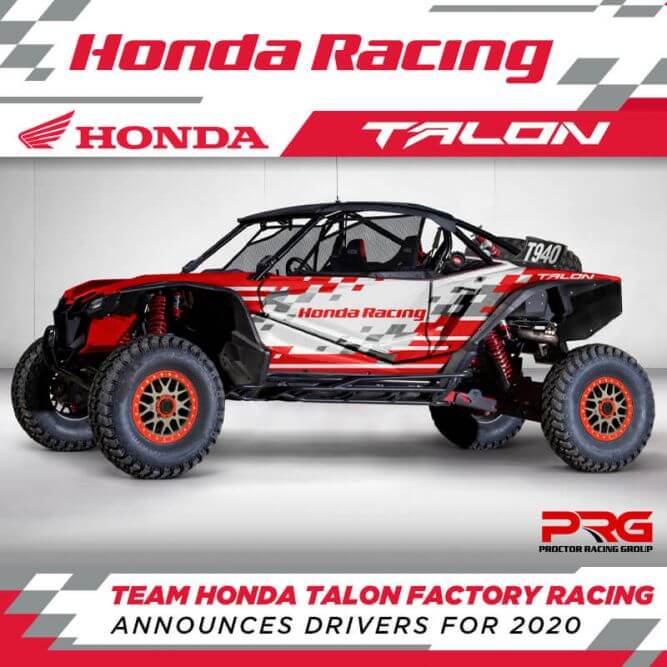 Fresh off their successful 2019 season in short-course racing, Eliott Watson and Christopher Polvoorde are joining the new Team Honda Talon Factory Racing program, being run under the same Jeff Proctor leadership of the proven Honda Off-Road Racing Team. The factory effort is designed to prove the Honda Talon’s prowess in desert racing.

“We’ve had our eyes on Eliott and Christopher for some time,” said Jeff Proctor, Team Principal. “At their young ages, they already have long and successful careers in short-course racing, with multiple championships between them in many classes, and they show no signs of slowing down. They’re perfect for our program and we look forward to helping them develop as racers.”

Interestingly, Watson and Polvoorde were recruited separately, but these college roommates share more than just a dorm room and a history of winning short-course championships. Both started their short-course racing careers at age 10, and as time went on, they both took on management roles on their respective teams, shouldering sponsorship and engineering responsibilities.

Eliott Watson’s 2019 season was capped off with a Pro Buggy Championship in the Lucas Oil Off Road Racing Series and a Pro Buggy class win at the 50th Crandon World Cup. He comes from a family of off-road racers and has childhood memories of his father racing. “Like so many others in the off-road world, it’s a family passion,” Watson said. We’ve worked hard as a family to get to here.”

Watson added that he is ready for a factory effort. “Obviously, there are many benefits of joining a factory backed team,” he said, “but for me, it means being able to focus more on my racing skills and learning from the best—whether it’s engineers or other Honda racers, like Alexander Rossi.” Watson will be working closely with navigator Daniel Plaza to tackle the ever-changing desert terrain on each unique racecourse.

Christopher Polvoorde is coming off a perfect season in the highly competitive Pro Lite class in the Lucas Oil Midwest Short Course League, including, clinching the Championship and a podium-topping race at the 50th Crandon World Cup. “I’ve dreamed of desert racing for a long time, but I know it’s a different discipline and I have a lot to learn,” he said. “The Talon program is a great step for me. I’m looking forward to getting the Talon out front and all the attention that brings.” Polvoorde will be relying on the expertise of Jimmy Davidson as his navigator through the desert extremes.

Both Honda Talons will compete in an aggressive first season, running in the most respected, rough and challenging desert races in North America as they seek to conquer the many extreme styles of desert racing—including the legendary Mint 400, the rock-crawling haven of King of the Hammers, the UTV World Championships, the SCORE Baja 500, Best in the Desert’s Vegas to Reno and the iconic SCORE Baja 1000, which for 2020 will feature a point-to-point course from Ensenada to La Paz. The schedule will be the ultimate testing and proving ground for the new Team Honda Talon 1000R Turbo.

Testing and proving driver, navigator and equipment is what the Team Honda Talon Factory Racing program is all about, and Proctor feels confident the team has a solid footing on all fronts. “We’re beyond excited to get this program in front of our fans and foes alike,” he said. “We may be one of the newest to the side-by-side category, but we have the advantage of our Honda Ridgeline desert-racing program experience, and the power of Honda’s racing heritage behind us. We love the pressure of living up to the past.”

Red Bull Off-Road Junior Program will shoot for the stars Previous post
Trucks: will the little Tsar become the master? Next post