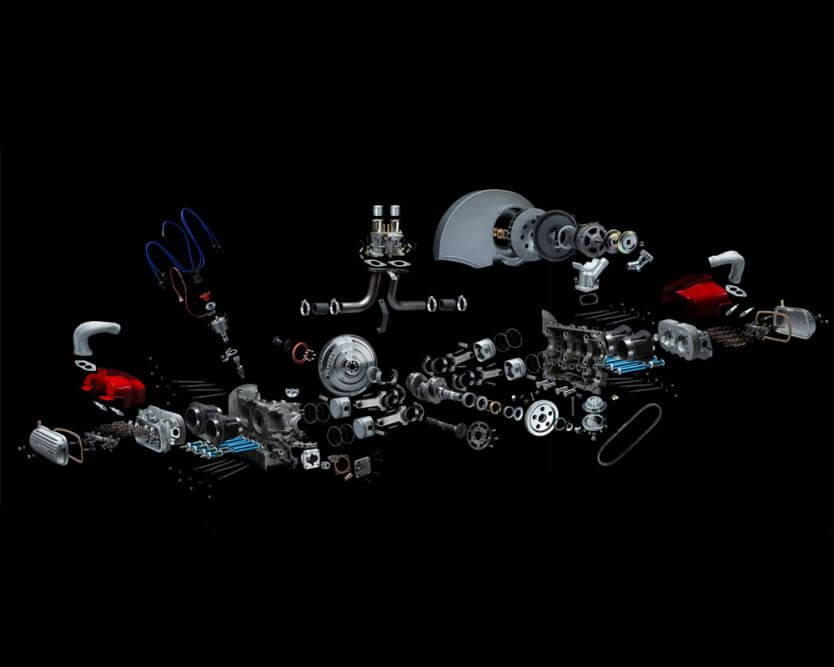 Introducing our new series we call “Dissection” where we will be dissecting off-road racing vehicles, products, and parts to visually illustrate the beautiful complexity of these amazing machines. We took over 200 photos and combined them to make this stunning image.

The VW aircooled engine is arguably the most important engine to off-road culture. In fact the very first 4 Wheel car to win the Baja 1000 in 1967 was a VW powered Meyers Manx driven by Bruce Meyers and Ted Mangels and 52 years later we are still racing them. Even though VW hasn’t made one of these engine types for more than 14 years they are still being rebuilt and raced on both sides of the border. With 13 overall Baja 1000 wins and hundreds, maybe thousands of wins in America the VW air cooled boxer engine’s engine on off-road culture is still going!

The distinct hum of the air cooled engine is especially prevalent throughout Baja as VW bugs and Vans are still in use as daily drivers, so parts are abundant and knowledge of keeping them running are widespread.

The engine itself, it’s unique design featuring flat cylinders short length, low center of mass and being well suited to air cooling eliminating the need for bulky radiator made this engine a true revolutionary idea in the 40’s when Volkswagen came up with the Beetle. Fast forward the ‘Bug’ made it to America finding its headquarters in Mexico, becoming their national car as it was affordable and reliable. By 2003 it became the #1 most sold car in the world with over 20 million units sold. The engine was born as a simple 1200cc displacement pushing 35HP but after evolving to different sizes it settled with 1.6L and 55HP

Built by Federico Montes of Montes Race Engines of Ensenada This particular race engine doesn’t have any extras or modifications due to the Class 11.  It features a low compression 8:1 combustion with a larger carburetor allowing the engine to use regular pump gas maintaining the same horsepower as the high compression race engine, the difference is that using regular pump gas makes the engine more reliable, cheaper to build, maintain, and race.

Even though this engine has been out of production since 2003, it is widely used today by Class11, Class 9, Class 5/1600, Class 5 Open, Class 16 and Class 12. With the rise of UTV’s in recent years, more people are using the UTV as a beginning platform rather than a VW Bug making it an endangered species.