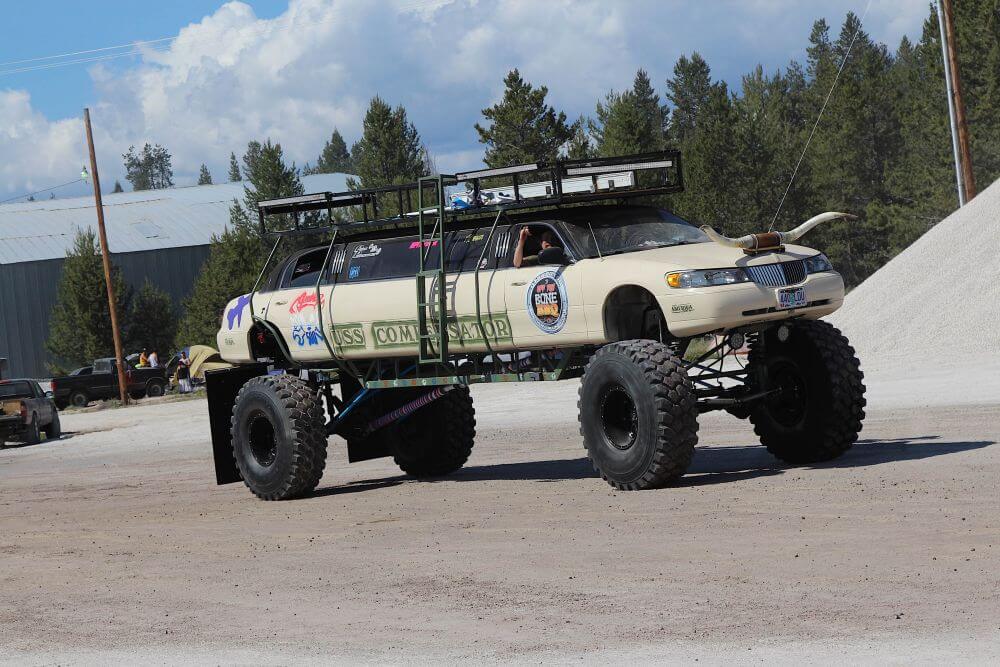 The Gambler 500 Completes Their 7th Annual “Super Bowl of Events”

Dubbed their Super Bowl of events, the Gambler 500 just completed their most recent and largest annual challenge.  A rally style “race” in which you build a vehicle that was probably never intended to compete in anything at all, and put it through a series of wild off-road challenges. This is the Gambler 500.

While many go above and beyond, for the absolute “Holy Crap!” out of this world factor, 90% of the vehicles are completed for under $500.  With no timing you just have to reach destination points and eventually complete the challenge.  Sounds impossible right?  Well with over 3,000 entrees competing this year, it was indeed possible. Granted, this year’s off-road navigational challenge took place during a time unseen in our generation, the nation and even the world. True to form, the Gambler crew was able to once again pull off an incredible event and has found a way to still make amazing adventures happen during the Covid-19 situation, even with about half of the previous year’s participants. 3,000 participants is still quite amazing, global pandemic or not.

We sat down and picked the brain of creator, (and some would say mad genius) Tate Morgan, to discuss this wild event that’s become a cultural phenomenon.  The most recent event took place this past June, at the time when most people needed a little adventure in their lives due to the current pandemic stresses. Throughout this challenge the participants visit numerous small towns, that are not used to large crowds or a mass migration coming through.  “Last year an additional $1.1M was spent in 3 days” Tate explained. The economic boost this event creates for local businesses is tremendous and always welcomed. This year the attention was more focused on the non-profit “Sons of Smokey”, in which participants removed trash and debris along the route throughout the challenge. Their past event had collected and properly disposed of 500 Cubic yards of trash in just 2 days.  To date, the Sons of Smokey are responsible for the removal of well over 1 Million pounds of trash, and abandoned vehicles on public land. It’s the “If not us, then who?” mentality, and we as off-roaders and enthusiasts can not be more thankful.  You can find out more info about the gamblers awesome non profit group here: Sons of Smokey.

The group also launched an app called “UnPaved” in which the navigation is turned to somewhat of a game.  Points and scores are allotted for those that take the most off-road/unpaved roads so you can imagine the competitive fun this creates almost instantly.

The biggest focus was HooptieX.  “The most accessible off-road racing series on the planet.  Open to daily drivers, junkyard beaters, UTVs, Trophy Trucks or your mom’s minivan,” Tate laughingly explained, but was indeed serious.  In other words, bring out whatever pile of sh*t you have and let’s race! Over 300 teams competed in just two days on the course and discussions are taking place to possibly bring the race to the infield of the 2021 The Mint 400 race in Las Vegas, NV.

Beginning in 2014, the first 3 years were fairly underground and not much more than small gatherings of friends and acquaintances on a wild adventure.  In 2014 there were a total of 13 cars, 22 cars in 2015, and in 2016 there were a whopping 32 participants.  Then, as amazing things go in this day and age, it went viral. “In 2017 we expected about 250 cars…..816 showed up!” Tate stated seemingly still in disbelief. A huge part of the 4th year included off-road racer, tv host, and motorsports enthusiast, Jessi Combs. Jessi arrived to shoot a show called “The List” and was an amazing addition to the festivities.  For Jessi’s show, Tate had built what is now one of the most famous and wild Mazda Miatas ever built.  Sadly in late 2019, Jessi was killed while breaking the land speed record at 522 MPH, and was soon posthumously crowned “Fastest Woman on the Planet”.

The wild Miata build was also included in the Motor Trends “Dirt Everyday” Series with Fred Williams, and Dave Chappell.  The Gambler Rally continued to host participants on each of their platforms, including a spot on Jay Leno’s Garage, and in 2019 the participant list grew to 3,000 cars, and 7,000 participants.

The Gambler 500: Was this all formed by accident?

During our conversation it was almost hinted that this was never meant to be anything large or crazy. So we asked Tate, how exactly it happened? “We weren’t looking to create an “event” or commercialize it in any way.  We never approached a “sponsor” or dreamed of asking participants for a fee (my buddies woulda laughed at me anyhow).”  He jokingly said.  After discussing a bit more how things completely went wild after going viral, of course that changed a bit of the structure which means much more will have to change to accommodate the growing numbers.  It was almost as if a sleeping giant had awoken.  Tate explained further, “After we went viral and I decided to open it up to masses, it changed the dynamic completely.  We made the Oregon event the epicenter for a global culture and brand, killing the low-key nature of the singular event, but encouraging anyone in the world to start punk rock versions like we used to do – as long as they don’t monetize and they pick up trash along the way.”  A pretty wild concept indeed.

Some truly wild, and one-off vehicles

Some of the vehicles that have shown up to rally have become iconic within the Gambler Rally community and throughout the motorsport world.  These are just a few head turners that have made their way through this wild event!

Friendship’s and Comraderies are Formed

During an adventure like this one could imagine the bond that is made between so many of these drivers and participants.  “It’s definitely a tight community, when you extract the sometimes large ego out of motorsports, you’re left with just the marrow; adventure, adrenaline, creativity and fun.” Tate expressed.  Each participant comes out to have a great time, and no one loses.

Why do you think it’s been so largely successful?

It’s no secret that this event is growing larger by the numbers, website hits, social media awareness and every aspect of the word: Growth.  We were curious why or how that is? How this event has seen so much positive feedback, and little, if not any negative feedback.  By all accounts that would be a perfect world, but it’s basically happening.  Tate let us know exactly why, “Most organizations are built from a business plan, we just decided to have as much fun and little regulation as possible while only demanding that participants not be d*cks.”  Which is probably one of the best and straight forward answers you can give.  It’s clearly working out too. It is to be noted that when any objections are presented, the group finds very creative ways to work it out without creating, as Tate put it, “A Boring Infrastructure”

Imagining or Predicting the Race/Movement in 5/10 Years.

On some levels, the goal is to keep the mindset quite similar to its current state. “As we adopt corporate structure and the mantra “Keep it punk rock” repeats in my brain regarding every decision.  Instead of trying to squeeze all the blood out of one stone we just add more stones, so we’re now just a big bag of rocks.” Tate explained. On the other hand, there are many other areas in which the ability to grow is enormous. “More minibike racing, more partnerships with cool events like Mint 400, developing the app into a global platform of fun-havers from all parts of off-roading, Gambler Whiskey in every liquor store, Sons of Smokey cleaning up millions of pounds of outdoor trash each year, and our Gambler brand being flown by cheap fun-havers everywhere not just events.”  he proudly said. The Goal is to make HootieX RallyCross, and GORRA (Gambler Off-Road Racing) the most accessible off-road racing anywhere. The GORRA events are a traditional 100 mile actual race, which include a staggered start, but still wheel to wheel.  Like all sanctioned races, cages, fire suppression, safety equipment, and classes are all included.  As opposed to the Gambler 500, which is an adventurous challenge with less restrictions.

The Mint 400:  Possible Plans To Work Together.

Known as “The Great All American Off-Road Race” the Mint 400 has been one of the most iconic off-road races, experiences, and festivals in motorsports since 1968, and takes place annually in Las Vegas, Nevada. “Matt Martelli (Mint 400 Owner) has mentored me through a lot of this and shares the spirit of just wanting to create fun and growth within the industry.  We occupy a much different segment of the off-road industry, but can also be appreciated as close to the roots of where most kids get their start.  So why not collaborate and make a show for the crowd on the infield of the Mint.” Tate said.   If you’re a true racing fan, and love outdoor adventures, this almost seems like a win win for everyone.  We look forward to seeing what may come to us all in the future.  Right now the possibilities are endless.

So What’s next For the Infamous Gambler 500?

The crew has begun looking at turning the entire event into a festival in Oregon, thus making the entire festival a full fledged EXPERIENCE.  “What we’d like to do is put something together for all of those that want to witness this sh*tshow, the best, and the craziest car show on the planet!” Tate exclaimed (Laughing).  Tate and organizers are currently in the process of identifying a new property with more amenities than what he described as the “Pumice Pit of years past.”  He also pointed out the apocalypse vibe of previous events was nice, but the constant dust was not. The family type atmosphere is something that would make the whole experience even more enjoyable, while still staying true to the “Punk Rock roots. These original roots are something all Gamblers would like to stick very close to.

In 2021, The Gamblers are set to embark on a 100 mile off-road endurance race in Oregon, coinciding with Gambler Rally, picture the 24 hour Lemons (Not le mans),  but off-road.  It’s sure to be quite the wild time, and only grow the Gambler brand.

It’s pretty evident the Gambler 500 crew, supporters, and participants are really doing something incredible.  Not only are they having a great time with great company, but they are doing a good thing for the earth and humanity along the way.  The amount of trash that is picked up along the way is staggering.  As the participant list grows larger, the earth gets cleaner.  You can’t go wrong with that!

You can find out more info about The Gambler 500 here, and even sign join, but just remember – “Don’t be a d*ck”

ABOUT US THE GAMBLER 500

Gambler 500 started in Oregon 2014 by Tate Morgan and the OG Gamblers, a small group embracing cheap fun in all forms.  Now dubbed “Gamblertown” the original event in Oregon is the global  meetup for what Gambler has evolved into as brand encouraging people across

the world to go have adventures using Gambler 500 as a call sign.  We allow people to use the term “Gambler” as long as it’s free and participants embrace the ideals of stewardship while having cheap fun in the outdoors.