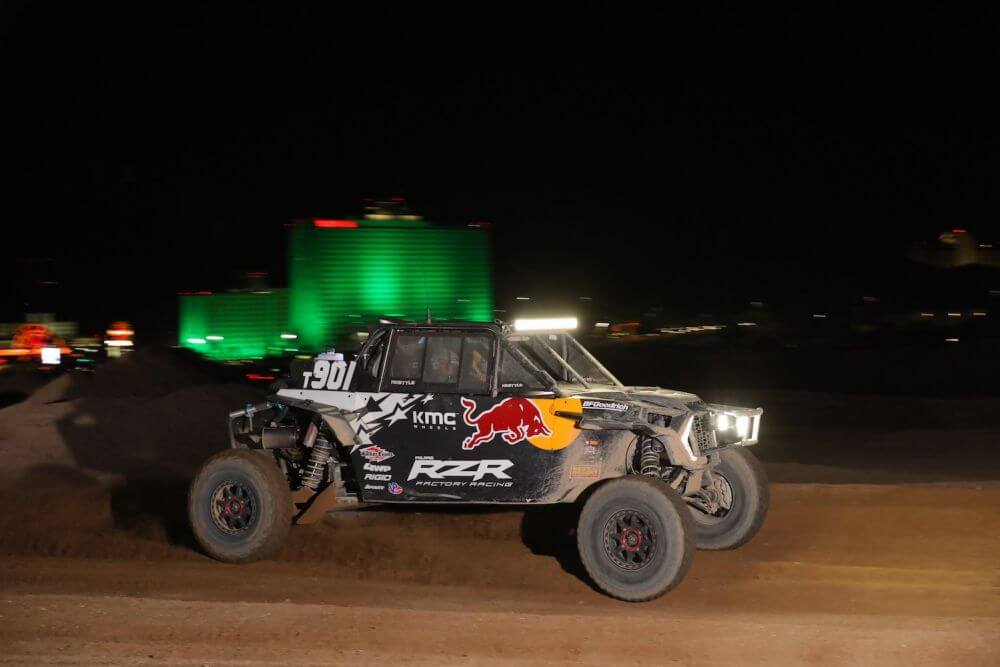 This is just the beginning for the town of Laughlin, NV for off-road desert racing as the results roll in for the Best In The Desert’s King Shocks Laughlin Desert Classic. The weekend saw an exhilarating UTV night race, a “rollercoaster” racecourse unlike any other, a rainstorm that made racing on Saturday a survival contest for many, and a two-day racing format that shook up the final podium. Throw in another huge turnout with over 218 vehicles competing over three days of racing and the King Shocks Laughlin Desert Classic and Baja Designs UTV Night Race will go in the record books as a phenomenal success.

The King Shocks Laughlin Desert Classic started off with a bang with the Baja Designs UTV Night Race on Thursday night, Feb. 20, 2020. Out of 102 racers, a great turnout, Mitch Guthrie Jr., in his Polaris RZR, beat Phil Blurton to take the Pro Turbo Class win; both competitors were head-to-head the entire race, never more than a few seconds apart. Ryan Piplic completed the podium, roaring out of the darkness to come in third.

Other notable winners in the Baja Designs UTV Night Race included Michael Isom, who triumphed over Gilberto Rodriguez to take the UTV Unlimited Class title, and Larry Heidler in a Polaris, who took the UTV Rally Class, beating out Chris Blais (Can-Am) and James Hill. Competition in short-course UTV races is always fierce, but the intensity is definitely multiplied in the pitch dark. The bright lights and rumbling engines made for quite the show.

The King Shocks Laughlin Desert Classic racecourse design was on everyone’s mind, from racers to spectators. The infield section and all-new “rollercoaster” section designed by Race Operations Mgr. Donald Jackson saw racers achieving negative Gs. The final rollers were epic in every way and made for some great photo opportunities. Every competitor said it was the best racecourse layout in years.

“What a spectacular race weekend,” commented Bryan Folks, CMO of Best In The Desert. “We had a little bit of everything with the rain on Saturday adding some extra challenges to the competitors. Without question, this was some of the tightest racing we’ve seen. Every class was a battle to the finish and the two-moto format kept everyone on their toes. Big thanks to Baja Designs and King Shocks for all their support and for making the King Shocks Laughlin Desert Classic such an amazing event and, of course, to all our competitors for their steadfast support of Best In The Desert.”

Day One for cars and trucks held many surprises. A morning rainstorm transformed the race into a survival run for classes with an early start. The rain pooled in pits, creating puddles so deep that cars coming over rollers were actually submerged. The racers flew into the finish line with mud-caked cars, huge smiles, and some epic stories from their runs.

The benefit of rain in an off-road desert race is that it settles the dust. The water dried, leaving a nice hard-packed course, pristine visibility, and racers hungry for the podium. The rest of Saturday saw beautiful sunny skies, positive attitudes, and extremely close racing.

As far as Saturday’s results go, James Dean beat Brandon Bailey to win Class 1500 while Class 6100 saw the largest turnout with 29 entries. It was also the most competitive race of the weekend with only three minutes separating first through tenth place. RJ Anderson, driving the #6153 truck, came out on top followed by Dustin Grabowski and Ryan Hancock. The race had another surprise as early race leader and Class 6100 hotshot Kyle Jergensen dropped out while in the lead due to motor issues.

The highlight of the day, however, was the grand finale Trick Truck race in the afternoon. Time trial winner Justin Lofton set a torrid pace with Jason Voss and Dale Dondell stocking him in the early laps. They were closely followed by Abdaly Lopez driving the Tony Smiley #2 truck, Carrie Smiley, and Adam Householder. In the end, Jason Voss, driving a Ford, came out on top followed by Lopez. Unfortunately, Justin Lofton did not finish (DNF) due to driveline problems.

The most impressive placing on Saturday was set by 15-year-old Jax Redline who finished in fifth place in one of the most competitive classes of the series. To see such a young racer get so close to the podium was inspiring for fellow racers and exciting for fans. Redline represents the next offroad racing generation!

Because of the two-moto racing format this year, the results from Saturday’s race were combined with Sunday’s. Racers who did well on Saturday surprisingly struggled on Sunday despite beautiful race conditions as the mud pits and swampy features dried out overnight. Both Voss and Lopez suffered from mechanical problems on Sunday, opening the door for Trick Truck competitors who were running close behind on Saturday to step up. Other classes were impacted as well, as many teams had a tough time matching their performances on Saturday.

In the end, Adam Householder bested Kevin Thompson by just one second on Sunday and had the best combined time, taking home the overall win for the Trick Truck class. Class 6100 also saw an upset with James Dean’s combined time driving the Kyle Craft truck beating out Alexander Ford’s own Ryan Hancock and Troy Messer. When the combined times from both days were added, the final podium changed quite a bit from Saturday’s results alone.

Other class winners include Connor McMullen, on a roll lately, who ended up taking Class 1000, and Sam Berri, who came back from a fourth-place finish on Saturday with a win on Sunday to take the Class 1500 overall.

All in all, it was a weekend that felt like the old days of desert racing. Emotions ran high as racers competed at night, saw some weather that made for challenging conditions, and had to do everything they could to save their equipment, race smartly, and perform well both race days to podium in the end.

Final results for the Baja Designs Night Race, both race days, and combined times for the King Shocks Laughlin Desert Classic can be found here.

Laughlin, NV will have a month of quiet before the next off-road desert race. Best in the Desert will hold its next race in the series, the 2020 Jagged X National Desert Cup Presented by Quantum X, on the weekend of March 20-22, 2020, also in Laughlin, NV. This race has two new sponsors, a new name, and an exciting new Supercross style qualifying format and is open to bikes, quads, and UTVs. Fans and racers can expect another great weekend of high-intensity racing.