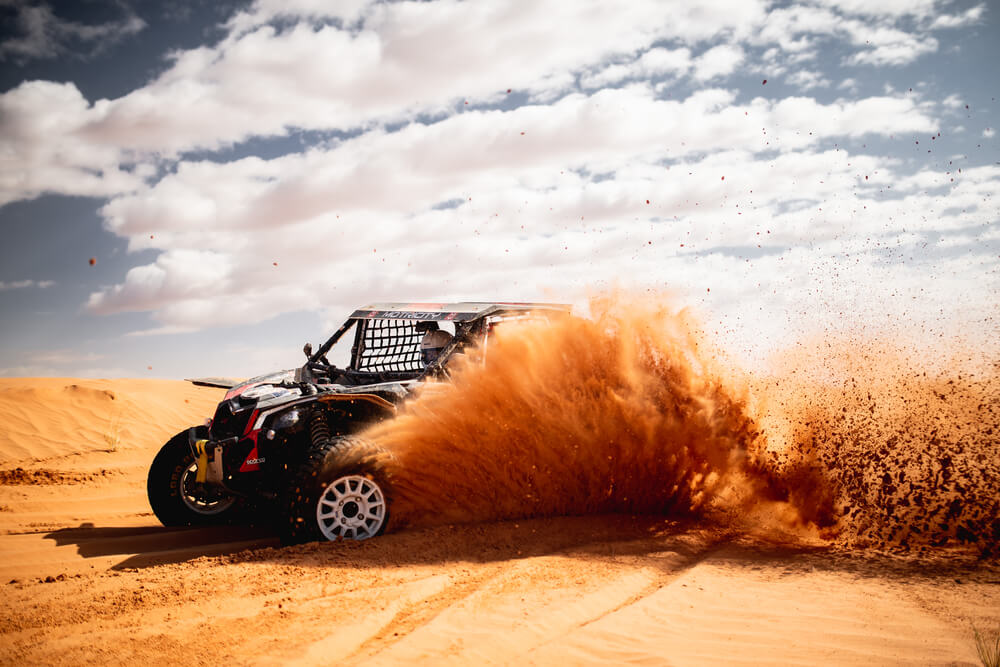 The Merzouga Rally Is Changing Format

For its 11th edition, the Merzouga Rally is changing format. All-terrain amateurs will now have an ideal environment for discovering the rally-raid discipline or honing their skills: the most able will win qualification for the Dakar, as explained by David Castera, director of the Merzouga Rally.

This year, the Merzouga Rally is undergoing a minor revolution. What is the new concept for this race in Morocco?

We know that the Dakar is a dream for all the bikers who start to develop a taste for all-terrain riding. Naturally, it is not realistic to take part without being correctly prepared. We are now able to propose a means of progressing, to help all these hopefuls with their baptism of fire on the Dakar, for which the Merzouga rally is one of the first rungs on the ladder. There will be two participation formulas: the “Raid”, for competitors who are at the very beginning of discovering the discipline plus the desert, and the “Rally test”, for participants who feel ready to compete with a roadbook and navigation instruments. Afterwards, the participants will be perfectly capable of looking to tackle the Rallye du Maroc, for example, and then the Dakar, all the more so in light of the fact that we want to be present to help them with this learning process.

So, what are the principles and modus operandi of this rally-raid academy?

The Merzouga rally already acts as a springboard to the Dakar, but we want to go further with regard to training the competitors. For example, when we hold a theoretical workshop on navigation, we will then go on to monitor the riders and drivers to see how they cope and to find out why they have incorrectly interpreted part of the roadbook. The same will be true for riding and driving: coaches will be in the field to explain how to tackle a dune in an SSV and suchlike. We will not be giving one-on-one teaching, but we will be focusing on personalised advice. Of course, we will do our utmost to give detailed coverage to all the non-race aspects: preparation, dietetics, recovery, etc.

The standings will not be based on speed but on navigational skills… Does this mean it is a race for regularity?

No, not that either. To assess whether each competitor is capable of navigating well, we will be focusing on the validation of waypoints. For those who have not missed one, the best will be the competitor who has covered the least kilometres. However, this points classification will also be weighted with other criteria: respect of the allocated times and speed limit zones or, for example, involvement in the training sessions. It is important, because success on the Dakar also depends on many details for which competitors need to prepare themselves. In fact, it will be a bit like continuous assessment over five days, with the opportunity of winning a ticket for the Dakar at the end.

With all this attention focused on amateurs, what is in it for the champions of the rally-raid discipline?

It is sure that they will not be coming with the same objectives, but they still have their place on the Merzouga Rally, because we are maintaining high standards with regard to the racing conditions. By that, I mean that the roadbooks will be the same as on the Dakar and the level of safety will be very similar, with a medicalised helicopter in particular. It will be an opportunity for them to carry out a week of tests in a close to competitive environment, focusing on their navigation skills whilst riding or driving at a pace that suits them. We are also counting on them to pass on their experience if they wish. As for the teams and preparers, they will have the possibility to offer their customers and prospective clients a new framework for testing their vehicles. In reality, this gathering is open to the entire rally-raid family.

Story and photos courtesy of aso.fr