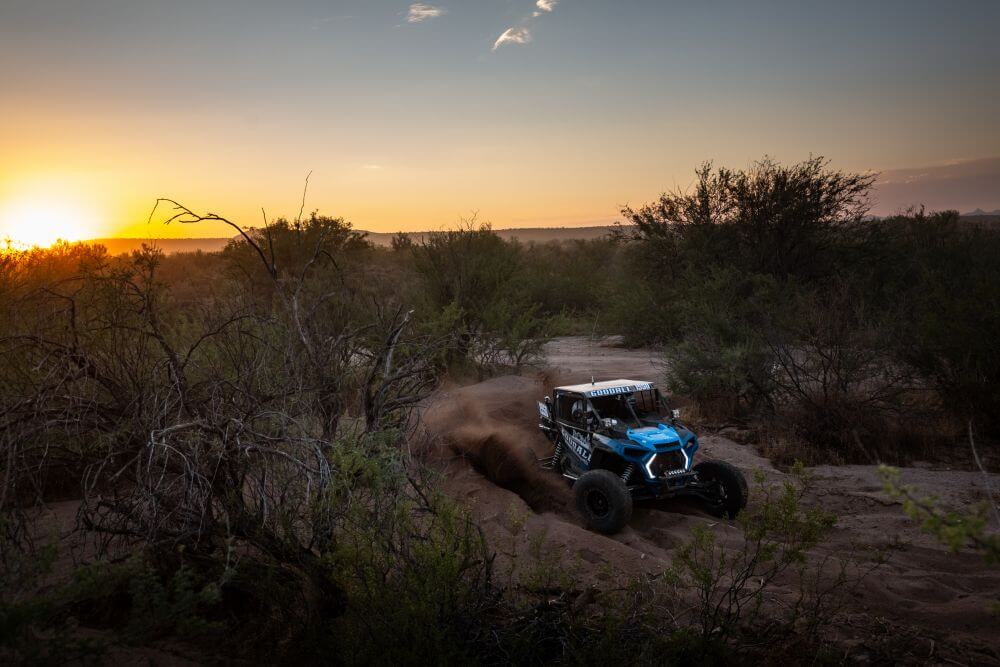 The Nationals, the story

It is too bad when Mother Nature takes the spotlight ahead of the amazing drivers at this year’s Nationals at the Flying E Ranch, but that was exactly the case. May 20th, 2020 is when the original National’s was supposed to be run and the temperature was 91F degrees for the high and 59F degrees for the low. During the rescheduled race this Labor Day, records were shattered every day of the event for high temperatures as the mercury rose above 113F for most days and only cooled down to 86F degrees for a low and would effect the outcome of almost every race in some way over the weekend.

The Nationals is an event that showcases SPEC classes that offer some of the greatest value in off road racing or showcase how to get into this great sport. Showing you do not have to sacrifice performance for the might dollar to race at a high level. These classes normally take the back seat to unlimited classes at normal off-road races, but at the Nats, they are celebrated. The race also has a unique format with 3 races in 2 days and all races being unique from the last. The youth UTV’s would race on a 3.6 mile course and all the big trucks, cars and UTV’s would race on a 10 mile course. After qualifying on Friday for TrophyLite and UTV Open on a 3 mile course, the racers would run 3 laps on Saturday morning, 4 laps in the dark Saturday night and 5 laps on Sunday AM in reverse.  The Youth UTV classes would run two, 30 minutes + 1 lap and on Sunday, finish the weekend with one 45 minute + 1 lap race.

Jaxon Leaming stood out in Race # 1 taking the win by over a minute over TJ Siewers and Cameron Leaming another 1:20 minutes back. These kids loved the track, and most had never started a race in true desert fashion which is 1 car every thirty seconds unlike the mass wave in other Youth UTV races. Race # 2 saw TJ Siewers taking the checkered flag first by only 3 seconds over first race winner Jaxon Leaming who both got in 7 laps. Braden Krah finished off the podium in 3rd place who did not finish a lap in the first race. Race # 3 was supposed to be 45 minutes + 1 lap but all the youth parents were concerned that the heat was just too much for the 170 motors, not to mention the young drivers so the race was cut back to 30 minutes + 1 lap. TJ Siewers took the win again with a large gap to Cameron Leaming in 2nd and Braden Krah grabbing 3rd. The overall for the weekend would be TJ Siewers in first with a 2nd, 1st and 1st followed by Cameron Leaming with a 3rd, 4th and a 2nd. Finally, Allison Furnell would step up onto the box with a 4th, 6th and 4th. Consistency obviously paying off for all 3 drivers. The future is bright for our sport for sure.

Braden Krah would put on a clinic and sweep the 570 class with first place in all 3 races. He would get 23 laps in total which was 3 more than second place winner TJ Siewers. TJ would start the weekend with an uncharacteristic, 5th place finish but battle back with a 3rd in Race 2 and 2nd in the final race. 3rd overall is James Thomas who had his own comeback with a 6th in the first race and 5th in Race # 2. The final race saw him in 3rd place which would be enough for the final spot overall. Alexia Leaming had 3rd wrapped up until an issue shortened her race to only 2 laps. These kids were so amazing to watch and the put on a heck of a show.

The big UTV, cars and trucks were up next and they absolutely loved the course and the Flying E Ranch facility. In Open 4X4, Jack Peterson go 1st, 1st, 2nd for the overall win followed closely by Daniel Reyes in his 7F truck with only 2 wheel drive. He drove hard but the 4 wheel drive in the washes proved to be the biggest disadvantage. Paul Kroger was not able to complete all the required laps.

In 4X4 Limited, John Snell would dominate the field with 11 laps completed with the closest competitor, Kenneth Goodall only getting 2 laps completed.  John would sweep the weekend taking home the overall win.

UTV Open only had 2 racers entered but the racing was great. Cory Sappington in his factory Can-AM, took the physical lead in Race # 1 and would never look back. His closest competitor would actually be outside the class from UTV Limited winner Logan Goodall. Cory would go 1, 1, 1 and take the overall uncontested. 2nd place would be David Jobski, who would have some issues in the first race would bounce back and keep Cory honest in the final 2 races completing all laps.

UTV Stock was dominated by Tom Coons in his normally aspirated RS1 who lead from the green flag. Tom was fun to watch as he kept the new car wide open almost every time he was in line of site and with what was the loudest race car to ever race a UTV race, you could heard him all around the track on the gas. Arielle Goodall was in her very first off-road race and put the boys on notice that she will be challenging for wins in the very near future. She outlasted Blake Van de Loo with a 2, 2, 2, in the 3 races and takes home a well-deserved 2nd place for the weekend.

TrophyLite was the final race each day and for good reason. This was the 4th stop on their 2020 TrophyLite Race Series and most of the top guys in points were all here to take home the gold. Larry Schmueser III from Colorado has won all 3 races this year and has been running away with the championship. Patrick Whitt, also from Colorado has been running up front all year and was sitting 3rd in points. Josh Cobb and Greg Bragg who are perennial front runners in the class have been fighting different issues all year as they find themselves desperate for points. Josh Cobb who has his shop in Wickenburg would qualify fastest followed closely by Daniel Reyes from Mexico who was driving for Joe Fitos who was having shoulder surgery in Florida. Greg Bragg was third.

The first race started at 12:30 PM and it was blazing hot. Josh Cobb opened up a 1+ minute lead in the first 2 laps but slowed dramatically on the last lap with vapor locking issues. Greg Bragg got around Daniel Reyes and would be the fastest driver for race 1 with a 36 second lead over Cobb, Whitt, points leader Schmueser, first time racer Rick Sanchez, Reyes’ and Dave Taylor from Utah.

Race # 2 was in the dark and Greg headed into the desert with all his lights leading the way. Cobb and the rest would have to deal with the dust and Greg would try to check out. Cobb would cut the gap in half as the two would separate themselves from the rest as they battle ensued. Schmueser would lose almost 2 minutes to Whitt and Dave Taylor another minute behind.  Josh would win the race but still be trailing Bragg buy a mere 1 second. Witt would be over 2 minutes behind Cobb securely in 3rd place followed by Schmueser, Taylor, Fitos (Reyes) and Sanchez. The race was on.

Race # 3 did not disappoint. Bragg would start up front again and would put up a torrid pace in the 113-degree temperature. Josh not only matched him but got back his 1 second plus an additional 31 seconds more. He was catching Bragg in a hurry but the two were just extending their lead on the field. Lap 2 would see Gregg bouncing back and match the 6066 truck in time with Schmueser closing in on Whitt, Taylor put up a quick lap as well getting to the rear bumper of the 6081 truck before losing a motor to the heat. Fitos, and Sanchez would have a great race in 6th and 7th Lap 3 the crowed waited for the two leaders to emerge from the desert but there was only 1. The 6012 of Bragg came in alone as Cobb was slowed by more vapor locking. Bragg would put on over a minute on Cobb at the finish of lap 3 as he headed out on his final lap. Cobb finally showed up struggling as they stopped several times to cool the fuel pumps and fuel. As reports from around the track trickled in, it was obvious that Bragg was stopped on track with vapor locking issues as well. Cobb was going for a mile or two then stopping. Whitt was catching up quickly but was also slowed by the heat. Schmueser who started the day in fourth place was now reported to be first on track, but the 6063 of Fitos was first on corrected time. Fitos disappeared when the dipstick on the tranny worked its way out stopping the all black truck in its tracks. The 6081 of Schmueser was within sight of the finish line when it rolled to a stop. Josh Cobb would motor by for the win followed by Greg Bragg who got his system cooled down and resumed his race. Whitt would keep moving forward and finish 3rd. Schmueser would get passed by Sanchez who did not want to be left out of the vapor locking issues and shortly also came to a stop. The 6081 crew would work feverishly until time expired within line of site of the crowed at the finish line. It was heartbreak for all that witnessed their efforts and surly harder for them as time expired. Sanchez would also time out literally 1 corner before the finish line. What an amazing race but that is normal for the stacked class. In the end, it was the 6066 of Cobb with the overall win with3+ minutes over the 6012 of Bragg. Whitt would gather his 3rd podium of the year in 3rd place. Rick Sanchez would just miss a podium finish in 4th place overall. Larry Schmueser would receive a DNF (Did Not Finish) for the last race followed by Fitos, and Taylor.

What an amazing weekend on a great track at a great facility. The next one is in April of 2021 and we are so excited for a great show. These racers in all classes rose to the occasion and reveled in being the center fo attention and will be back to defend or improve on their results in this years running of the Nationals!