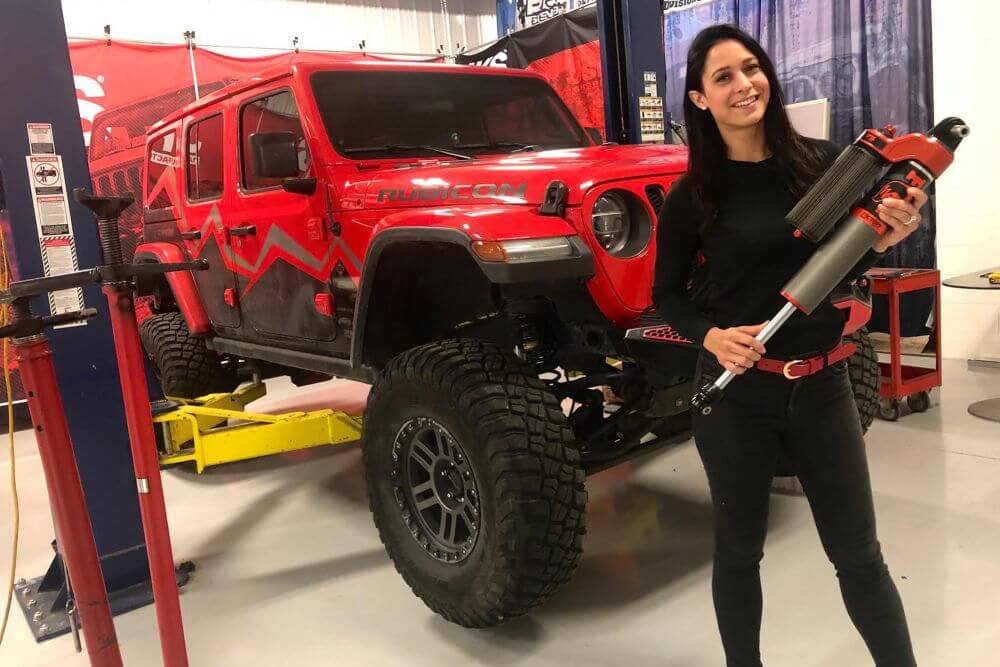 We’ve seen her at the Mint 400, Crandon, King of Hammers and many other petrol fueled events, but who is Tiffany Stone without the mic?  I had the opportunity to sit down and get to know a little bit more about the on-air, on-camera talent, host, and pit reporter, and why she’s so passionate about her work. You’ll soon find out, she’d not your average reporter.

With her father being a Former Marine, Tiffany bounced around from state to state like many “military brats” do. By the time she was 10 years old, she had lived in 4 states and attended 5 schools. None of it was weird to her since it’s all she knew, but one thing it did do was force her to break out of her shyness, and meet new friends each year. “I was always the new girl” She laughed.  Perhaps this has helped with her confidence in front of cameras, which not many find easy.

Outdoor activities were always a huge part of her life.  Her grandparents lived on a 5+ acre property, which included a small farm in White lake, MI.  Climbing trees, riding bikes, playing with the pigs, chickens, pheasants, and other animals, her mother had a very difficult time bringing her in at night, especially when she was riding the tractor, and cutting the lawn with her grandfather. “As a child I was always so fascinated by everything my grandfather and uncles did”. She spoke so highly of her childhood, which was really awesome.

TRANSITION INTO HER BROADCASTING

Tiffany began working within the motorsports industry in 2008, starting as an umbrella girl for Toyo Tires & Formula Drift, and the following year everything changed when she represented Jeep and FCA as a product presenter at the 2009 LA Auto Show. This opportunity opened so many doors including relationships with MOPAR/FCA Corporate and NHRA.

She went on to explain, “I then moved over into the dirt world, specifically Short Course racing in 2015. This is where I had my first opportunity at live podium interviews and pit reporting with TORC. A few years later, I headed out west and learned all about desert and off-road racing including the Mint 400 and King of the Hammers.”

As we discussed the races and events, she explained. “I truly enjoy how so many races and events can be the same, but completely different at the same time. All the same parts are there, but most of the time, the outcome is never what you predicted would happen.” Which is why she enjoys the off-road and motorsports community so much.

When I asked her if she would ever be interested in racing, she smiled huge, and her reply proved it’s something that has crossed her mind more times than not.  “Hahah! Of course. Some people have heard about my crazy ideas about racing, but most have not… yet!” She explained. After she attended her first King of Hammers in 2018 in Southern CA, she admitted she was bit by the bug. A very expensive and time consuming bug, and very much wanted to build a 4400 (the ULTRA4 Unlimited Class). She quickly realized that you have to start somewhere, which is why she’s enjoyed building and transforming her Red 2018 JLU, she affectionately named “Lucifer”, into what it is today. Working with some of the top brands in the industry, her Jeep is built for fun, and all around ruggedness. She clearly has a blast in it too!

As we continued to chat, I asked if she had any role models that might have shaped her passion, drive and work ethic. “I know many people may criticize me for saying this, but Kanye West is a huge role model for me. Not necessarily for all the crazy things that he says, but more for the things he does. He isn’t afraid to be different, a trendsetter, someone who doesn’t care what people say about him.” She explained.  Naturally I wasn’t expecting her reply, but I also began to understand it, and have to say it was hard to disagree with her.

She continued,  “After he had a successful music career, he wanted to try to become a designer. Many people laughed at the idea, but he asked why he couldn’t be both? And for some reason, that has stuck with me. I am able to be more than one thing. For that reason right there, is why I started to build a vehicle that I could go off-roading with. To give me something that would push my limits a little farther. To feel.”  And I completely agree!  Don’t let anything hold you back.  A famous Michael Jordan quote states “You miss 100% of the shots you don’t take.” Made famous again years later in the sitcom The Office.  Limiting yourself on what you can do will only eat away at you, so JUST DO IT. (Ironically, another shameless Michael Jordan/Nike Plug).

Surely every journalist, and broadcaster has had some moments that stand out in their career, so I had to know if there was one single moment, that will never be forgotten. She happily replied without hesitation, that during the 2015 – 2017 NHL seasons, she was the In-Arena Host for the Detroit Red Wings hockey team, which is pretty darn rad itself, but she was very fortunate to be a part of the Olympia Organization for the last two seasons, and for the closing of Joe Louis Arena since it opened in 1979. She explained how very humbling it was to be in a building where so many athletes created so many iconic sports moments, and something she was so proud to be a part of.

As well, being a part of the Crandon International Raceway’s 50th Anniversary was also quite special. It’s the very place she started her off-road and short course career, so being able to be there last year was humbling to say the least. “It’s an iconic track and the people who have come from there are even more iconic in the off-road community.” She stated.

Do you still get butterflies before airing, or do you feel completely natural?

I definitely still get butterflies, but I think that is the most exciting part of it. When something means a lot to me, I try to do the best that I can because with what I do, you’re only as good as the last thing you did.

Most embarrassing thing to happen live on the air.

I don’t think that I have one that really sticks out. And for that, I’m truly thankful! I think that I try to make the best out of every bad or unfortunate situation that happens. Sometimes things just happen that are out of my control, so I usually look at the positive rather than the negative.

When you’re not in front of a camera, what are a few things you enjoy doing, a little about your personal life.

I really enjoy being outdoors and in nature. And when I can combine that with driving my Jeep, it’s a pretty awesome time. I also enjoy playing volleyball. I used to play when I was in high school and college, so it’s nice to be able to get together with my friends and play again. We’ve actually won quite a few championships throughout the years too!

I would love to travel around the country in Lucifer just exploring and discovering new spots I’ve never visited before. I really want to drive all the way to Alaska and check out the Northern Lights! I think that would just be amazing to check out in person!

What’s NEXT for Tiffany Stone if scheduled events remain?

My next event, if everything opens back up, should be the New England Forest Rally with ARA, American Rally Association. However, the Baja 500 is the weekend before, so who knows, maybe I’ll make it down for that race too! It would actually be the first time I went to Mexico for a race.

I thoroughly enjoyed chatting with Tiffany.  She is an incredibly talented, motivated person who strives for nothing but the best.  She has proven herself to be exactly what our sport requires, drive, determination, and goals.  She’s not just on air talent, she lives it too while she enjoys the outdoors, and life! One cant help but to hope to see her strapped in a race sometime in the near future, whether it be as a co-pilot, or even driver.  If she continues to show the determination she has, then we will see it in no time.  Watch out King of Hammers!

You can follow along with Tiffany via Instagram @tiffanystone – and for those wondering this article is officially ” #TStoneApproved! “