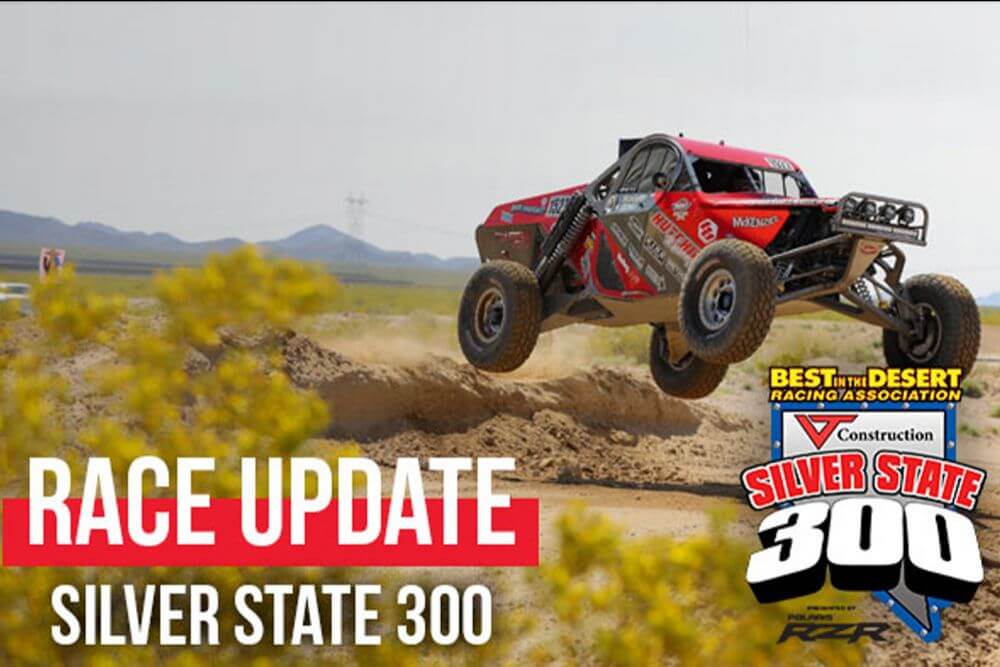 LAS VEGAS, NV (June 17, 2020): Off-road racers across the nation are gearing up for Best In The Desert’s upcoming VT Construction Silver State 300 Presented by Polaris RZR on the weekend of June 25 through June 27, 2020, in Alamo, Nevada.

This year’s 300-mile point-to-point race is already seeing record participation with a total of 272 entries in the drawing held last Friday with more still coming in. The previous entry record for Silver State 300 events was 227. UTV classes lead the way with a total of 94 UTVs entered thus far, followed by 78 motorcycles/quads. Cars and trucks are also running strong with 19 Trick Trucks and 31 entries in Class 6100.

The biggest names in each category are ready to show up and race hard including Phil Blurton, Ryan Pipic, Mitch Guthrie Jr., Justin Lambert, Brett Sourapas, Austin Weiland, Wayne Matlock, and Sierra Romo in the UTV Turbo class; and Jason Voss, Bryce Menzies, BJ Baldwin, Justin Lofton, Kevin Thompson, Steve Olliges, Adam Householder, Tracy Graf, and Luke, and Dan in the Trick Trucks class. Consistent overall threat Skyler Howes and the factory Beta team led by Joe Wasson are sure to battle it out against Jeff Trulove and Hayden Hintz in the motorcycle class. Every class is loaded with the best in off-road racers.

It’s bound to be a heated weekend of close competition so fans who aren’t able to attend can follow the action live on Best In The Desert’s Facebook and Instagram page and on RacingTrax!

“What a way to get back to racing,” commented Best In The Desert CMO Bryan Folks. “We are overwhelmed and very grateful for the support of the racing community. This just goes to show, if you build it they will come. We can’t wait to see everyone in Las Vegas for Time Trials, Registration, and The Event Expo.”

The stakes are high in the VT Construction Silver State 300 Presented by Polaris RZR as results lead to double points. As the fourth race in the 2020 series, standings from this event will help competitors contend for the highly coveted Best In The Desert Class Championship, as well as the recently announced Adventure Championship Series, temporarily named the COVID-19 Championship.

The Adventure Championship Series will be a condensed championship that will include points from the remaining Best In The Desert races of the 2020 season including the VT Construction Silver State 300 Presented by Polaris RZR, the 2020 Maxxis Tires “Casey Folks” Vegas to Reno, the 2020 Jagged X National Desert Cup, and the 2020 BlueWater Desert Challenge. This will give a chance for competitors to still win a championship by entering races mid-season.

“Giving back to the sport has always been our goal,” said Operations Manager Donald Jackson. “The Adventure Series is just that. It’s giving the off-road community something positive and energizing in a time that is filled with uncertainty. It’s never been done before in ‘The American Off-Road Racing Series’ mid-season but we felt it was the right thing to do. Sometimes it’s easy to lose sight of the big picture in life and with this pandemic, I think we have all come to realize how much we care about our family and friends. We want everyone to feel welcome and a part of the Best In The Desert family no matter where you’re coming from.”

Best In The Desert is proud to lead the way in the off-road racing world and get back to doing what we all love in a safe fashion in the midst of a pandemic. Protocols and an updated itinerary are in place in order to protect racers, staff, and fans and ensure they adhere to best practices to mitigate the spread of COVID-19. The amount of racers who are getting ready to return to the desert shows the overwhelming degree of participation and appreciation for the event.