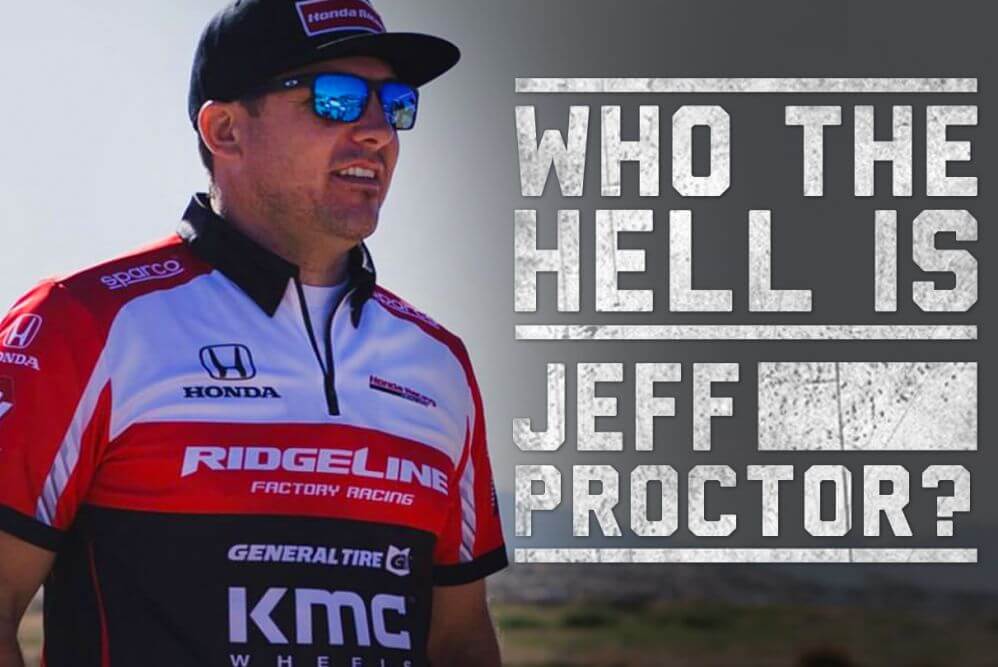 Who the Hell is Jeff Proctor

Jeff Proctor grew up surfing in Southern California and like most American kids played traditional stick and ball sports as well. The allure of racing was sparked from his competitive nature, but it wasn’t until starting his first business, an action sports clothing brand in his college dorm room, that Proctor was able to buy his first motocross bike and begin his lifelong journey in off-road racing. Unlike so many championship off-road racers, Jeff did not grow up around the sport.  In fact he is a first generation off-road racer.

After racing off-road bikes for nearly a decade, Jeff began to learn the inner workings of running a successful off-road racing program. Hungry for knowledge, he volunteered for anything that was needed, from running parts, to relaying communications or driving a chase truck through the night in Baja. Eventually, Jeff worked his way into the navigator’s seat and continued to race two wheels while looking for an opportunity to drive. The competitive drive was always in him. Jeff’s first opportunity behind the wheel came in 2006 with Jason LaFortune in the Jeepspeed class. Jason and Jeff continued racing together for several years, eventually evolving to take on the Baja 1000 culminating with a thrilling come from behind Baja 1000 class victory with renowned chassis designer, Craig Hall. The same year, Jeff also piloted his own bike to a BITD season championship in the ultra competitive +30 Expert Bike class.

After many successes, Jeff set his focus on racing on four wheels. In 2013, Jeff began racing in the Trophylite Spec Class with Coen Racing. The Trophylite class offered an affordable, competitive class on an equal playing field. After finishing 2nd Trophylite at Parker and The Mint 400, Jeff acquired the vehicle and began to apply his business skills and race knowledge to run a successful race team.

Jeff has methodically climbed up the through the off-road ladder system from two wheels to four, from limited vehicles to more advanced vehicles.  He has become a student of the sport, constantly seeking to improve his race-craft.

“I spent a lot of years helping in the pits, helping in the race shop, making observations and asking questions. Preparation is fundamental to success and knowledge is key,” stated Jeff.

His approach in systematically acquiring knowledge has prepared him for this next big step in his racing career.

Next, Jeff partnered with American Honda to build a one-of-a-kind factory backed off-road Ridgeline race truck that would serve as a concept vehicle to showcase aspects of the new second generation production vehicle.  Initially, Honda was contracted for the launch of the program at SEMA in 2015 and to race a 5-race schedule to promote the new Ridgeline in 2016. The initiative was a way to show Honda the marketing value of off-road racing. “I knew Honda was the largest engine builder in the world, they have had amazing engine technology for years of racing in Indycar and other forms of racing. Our partnership with Honda Performance Development (HPD) and American Honda has been a dream come true.” Said Proctor. He and his team along with HPD figured out a way to utilize existing technology from the sports-car racing world and adapt it to the needs of off-road racing. In fact, they had to detune it.  They needed reliability over horsepower.  The combination of a successful marketing effort and a successful race effort has led Honda to feature the “Honda Racing At Heart” globally syndicated tv spot for four consecutive years.  To date, it is the most successful commercial Honda has ever seen, and is a direct contribution to the success of the Honda Ridgeline production vehicle.  “It was imperative to show Honda how it needed to be done in order to get them involved. That approach worked!” stated Proctor.

Not only did it work, it was a smashing success! Proctor enlisted the help of longtime friend and off-road racing industry maverick Matt Martelli and his content company Mad Media. They created a high-end content campaign that showcased the vehicle build and testing leading into the 2015 SEMA show where the new Truck debuted essentially stealing the show with it’s modern but rugged good looks. Procter backed it up by going on to win (2 Million) races. Proctor was not only one of the primary drivers of record, he was also direct and oversee the team’s entire race operation.

In fact the Honda Ridgeline Unlimited truck became one of the most requested vehicles for marketing at events throughout Honda. Proctor was asked to build a second truck, this time with the full backing of Honda, so this time he turned to championship winning truck builder John Vance of TSCO racing and the Honda Ridgeline Unlimited truck was born. Jeff went on to not only win more races but he brought world class racers such as Alexander Rossi bring more attention to off-road racing.

This also enabled Jeff to start Jsport Performance Accessories in 2016, an automotive parts manufacturer catering to the Honda enthusiast worldwide. As many people know the “Overlanding” lifestyle is growing at a rapid pace, but what many people don’t know is many aspects of overlanding came from the off-road racing industry.  A prime example: while racing down in Baja Jeff found that he continued to scrape the underside of his Honda Pilot chase vehicle, so what came of it?  He and his team now produce one of the most popular skid plates and lift kits around for the Honda platform, a market that was all but forgotten about, now has helped pave a path for new Honda vehicles.

Over the Last 5 seasons of racing, Proctor’s team has become an integral part of American Honda’s corporate Racing message found in print, television, social media and in dealership displays.

Jeff has now single handedly shown Honda the value of off-road racing, and eventually the powersport division began talking to him about building a race program around the newly launched Honda Talon Sport UTV. Proctor jumped at the opportunity to expand his relationship with Honda. He put together the first truly factor backed program in a long time. He hired and paid young champion racers Christopher Polvoorde and Eliott Watson. For those that understand how factory teams work you’d know this is not only groundbreaking, but a first in the industry, and shows the pure faith Honda has.

Proctor chose to debut this new Talon racing program at arguably the toughest race on the planet to prove a vehicles durability. Proctor Said, “There were a lot of people questioning my sanity to debut a new UTV at KOH. I didn’t disagree with them, but knew our team had put in the work and was up for the challenge.” The Factory Honda team went on to finish their first attempt at King of The Hammers in a near stock Talon, proving to the world the dependability of this new Honda Talon UTV.

While building the Honda Talon platform into a race capable package, Jeff added Jsport SXS as a way for consumers to have access to proven race parts that they were developing as well as aftermarket parts for the Honda Talons.    He offers a complete race package or a play car package. He is deeply involved with his business, and has talented crew aboard to help run the show, including Adam Gunn who runs day to day operations of Jsport Performance Accessories and Jsport SXS. He and his team continue to strive to be the best at what they do, leading the industry in innovation, racing and aftermarket products.

You can visit  jsportusa.com & jsportsxs.com for all of your Honda Motorsports needs.