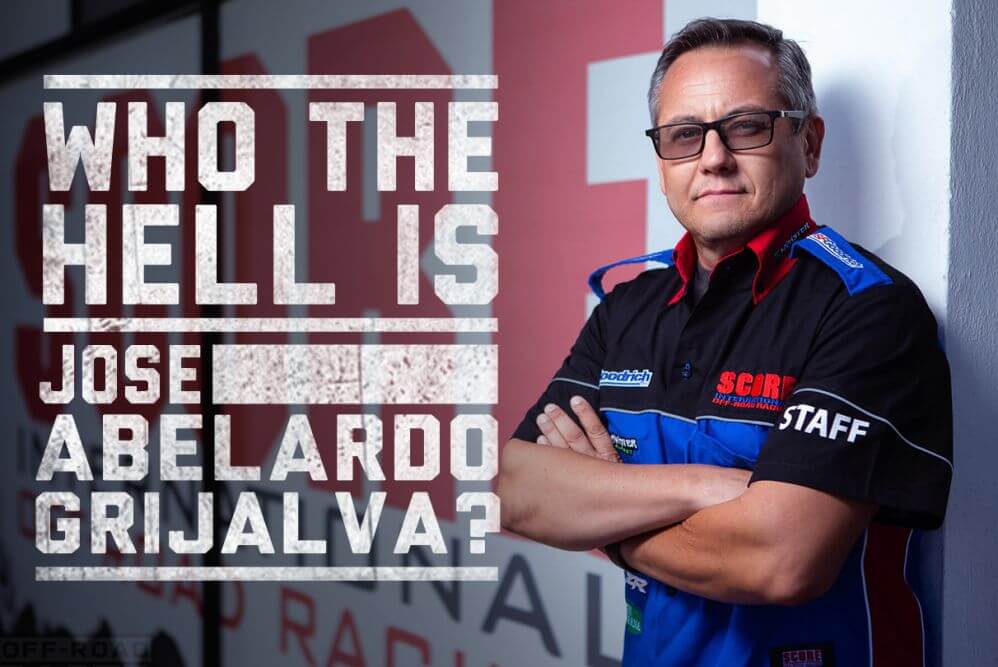 Who the hell is Jose Abelardo Grijalva

Tell us a little bit about yourself.

I was born in Ensenada in ‘71, I quit school at 15 years old to go work in agriculture and animal husbandry, actually cattle rising is something I still love to do and I hope to get back into it in soon. I got married at 21 years old, I have 4 daughters and a grandson. We all have that passion for the countryside and off-road. I never really had another hobby, off-road was always my calling.

What was your background before off-road?

I was in the countryside working raising cattle, and trying to follow my dads footsteps.

How did you get involved with off-road?

I always wanted to be an Off-Road Racer, at 24 years old I started my racing career racing in Class 7sx racing with Ramón Castro and the RECORD Off-Road series having great success since the very beginning winning the “rookie of the year” award and a podium finish in the championship that later we managed to win it overall.

I started with nothing but with a lot of passion and help from friends like Willie Valdez and Javier Espinoza I could learn and achieve my goals as racer.

What are some of the biggest achievements you had during your racing career?

1994 when I started I was able to race in different race serials like RECORD, CODE and SCORE. Also in different categories along the years like Class 7, 1, 10, 12, TT and TT Spec.

One of my biggest adventures was in 2007 when I got an opportunity to be a co-driver with Darren Skilton navigating the Rally Dakar from Lisboa to Dakar in a T4 Mercedes-Benz Truck. We couldn’t finish due to mechanical failures, but it was an unique experience. Later in 2008 we came back as support, at another rally from Budapest to Hungary.

About my achievements: One I like the most was at a SCORE San Felipe 250 in 2014, I was racing with Larry Connor in the TT Spec category, I took the wheel around 95 miles from the finish line losing in time but I managed to cross the finish line in taking the first place.

How did you get involved with SCORE?

I have a long friendship with Roger Norman. I used to guide the tours in Wide Open and we even raced together. In December of 2012 when Roger had everything ready to make the announcement of acquiring SCORE he gave me a call saying that I would be in charge of it, he didn’t ask me at all but he knew my answer already. My first race as director was the San Felipe 250 in 2013, Alfonso Lacarra from CODE helped me and we had great success at the event. In 2019 I also get named President of SCORE-International.

In a nutshell, what is the job of a race director?

As a director I’m in charge of the creation of the complete race course of every race. I don’t do it alone as I have a great work team that together we get in charge of negotiate deals, permits etc.

We work to give all the rules and regulations to the racers before every race and we make sure nobody has doubts about the races with mandatory meetings involving the drivers. During a race we follow from the state Red Cross HQ using satellite trackers coordinating any rescue operation.

We also work together with the authorities to bring the best possible safety to all racers and spectators, coordinating rescue plans along the whole course and trying to cover the most areas both by ground and air. Also we attend any protest the racers might have, and we penalize anyone that commits an infraction to our rule book.

What are the steps of planning a race track for an upcoming race?

Depending on the date and place we plan to make every race different, we always try to put a challenge without exposing our racers to high temperatures even when nature doesn’t fully cooperate sometimes.

With all our combined knowledge of the Baja roads I put together a GPS track file in my computer until I get the desired mileage, then we work with Hector Sarabia who goes and negotiates with the land owners. At the same time the required government permits are getting worked on. When all the race miles are approved we gather our marking tools and open the track for pre-running. It’s worth mentioning racers already are covered by insurance from the first day we open for pre-run.

And during a race?

When race day comes, I make sure all our team is gathered together, we verify the racecourse is free of obstacles and then we drop the green flag for the first bike. From that moment until the last car crosses the finish line we are monitoring for any problem or incident. We also check the trackers making sure nobody committed any fault.

What are the challenges you have faced as race director of SCORE?

Making sure every race is the safest possible is the biggest challenge. Last year we had a huge challenge due to the heavy rains where I had to make the decision to push the start of the race one day to make sure the race track was acceptable racing conditions. Another big challenge is to keep the racecourses fresh. We keep adding or changing sections to maintain racers happy. Every race has its own challenges but to keep growing in quality is the constant one.

What are some of the best and worst things as race director?

Having a clean race with no incidents is the best.. Hearing positive comments about our events from the racers is also something very important and motivating. The worse is to get that call we never want to hear, dealing with fatal accidents is and will be forever the worst situation we can deal with.

If you could build a race anywhere from any distance. What it would be?

A true Baja 2000, somehow drive down on the Pacific side and come back by Mar de Cortez.

What is your favorite team or driver currently or all time?

I don’t have favorites currently or I can’t say (laughs), but I always admired (and who even inspired me) to race is Roger Mears.

Anything you want to tell to all SCORE fans out there?

I would like to say that we need to take care of this, the most beautiful sport we have. We need to take care of Baja keeping our desert clean especially when we go to enjoy and see the races. Lastly but more important, to keep everyone safe, don’t put yourself in danger, bad things happen in just a blink of an eye and there’s no turning back from it.

The job of SCORE’s race director is not an easy task, lot’s of hard decisions have to be made especially in the upcoming races but now you know Jose G. is up to the challenge.

Who the Hell is…? is an editorial feature series where we recognize the business people of off-road who have helped shape the industry and culture. Entrepreneurs, crew chiefs, engineers, fabricators, event organizers, promoters, dreamers, etc. all play a part in the growth and maintenance of off-road racing culture.