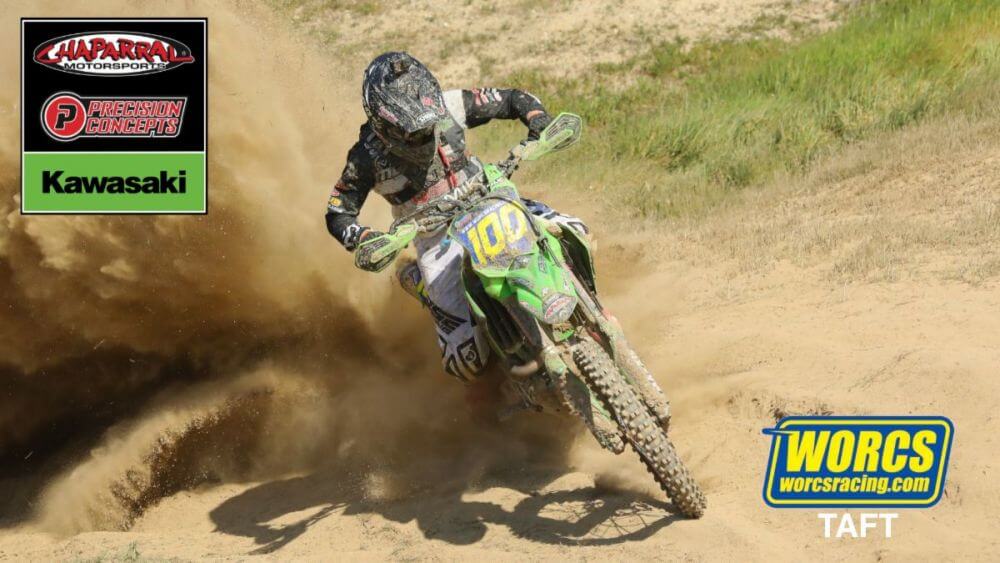 Honolulu Hills Raceway, in Taft, CA, played host to the second round of the 2020 WORCS series. As is typical in Taft, the course developed lots of square-edged chop. This made conditions both tricky and physical for the riders to push the pace for the full two-hour pro race. Another factor at Taft is the roost. Though the terrain isn’t rocky in nature, the consistency of the dirt when watered makes for thick clumps. These clumps cause some serious pain when shot off the rear wheel of a leading motorcycle.

For Chaparral Motorsports, Precision Concepts, Kawasaki team rider Zach Bell, the goal was to get his WORCS season back on track. An unfortunate DNF at the first round had left him with a big deficit in the championship. Meanwhile, Bell’s teammate, JP Alvarez, was looking to build off of his first-round performance of second place in Pro 2 Lights.

Zach was lined up further outside than most of his competitors on the start line. As the gate dropped, and the line of 450 pro riders roared into the first turn, Zach funneled into fourth place. On the first lap, Bell shadowed series leader Taylor Robert, looking for a route past. Unfortunately, Zach got caught in a rut that he didn’t see in time and crossed up. The soft rut instantly pulled his front end to the ground, sending he and bike cartwheeling. Zach was able to remount, but his front wheel was damaged in the crash, forcing him to come into the pit to change it.

Following the pit to change the front wheel, Zach put in an incredible charge. The KX450 pilot was the fastest rider on course for much of the race, allowing him to reel in the main pack of riders inside the top-ten. Bell was able to pass all the way up to fourth place with just a few laps remaining. Though he’d closed the distance on the podium positions, Zach just ran out of steam at the finish and had to settle for a hard-earned fourth place.

“My race started off decent; fourth place off the start. But it wasn’t a great gate pick, I wanted to be a little closer to the inside. From there, I was behind Taylor for third and I just went into a water truck rut. It stuck my front tire and I went down pretty good. That ended up trashing the front wheel, and it took a while for the bike to start. So, it was a rough start to the race. Then, I had to make a pit to change out the front wheel. I played catch up from there and worked my tail off that race. I really wanted it today. It’s tough to have these races, but looking back at it, I did everything I could do. [The effort] shows that I’ve been working hard and really want to win. But it is what it is today. We’ll work harder on putting ourselves in a better position. Looking forward to [NGPC] next weekend.”

On the Pro 2 Lights line, JP spun heavily off the concrete start. Though he was mid-pack through the first turn, Alvarez was quick to push his way up to fifth place behind series leader Tyler Lynn. Early on the first lap, Lynn got off balance and came right across the front of JP down a high-speed straightaway. Alvarez could do nothing to avoid Tyler, as his front end was taken out and he was sent straight the ground with force. After getting his breath back and remounting, JP built into the race and was able to begin picking off a few riders as he closed in on the top-ten.

By the halfway mark, Alvarez had climbed to sixth place, but there was quite a gap to the riders ahead. Over the final laps, JP continued to click them off consistently, which saw him close on the fourth- and fifth-place riders. As the white flag came out, Alvarez put in a fantastic effort and was able to pass both riders to salvage a fourth place finish on the day.

“I kind of spun off the start, with the concrete. Got going maybe tenth off the gate, but got to the top-five through the first few corners. Tyler [Lynn] and I were battling for a little bit. Then, he got a little squirrelly and came into my line and I went yard-sailing. My side was hurting a lot [from the impact]. So, it was hard to get that out of my mind. But, I was just trying to put in solid laps once I got going. I was probably dead-last and made my way all the way up to fourth. So, that was a great, but I definitely wish I could have done a little better.”

“Both riders experienced some serious adversity this weekend. Just from looking at the damage to Zach’s bike during the first-lap pit, it was obvious he went down hard. For Zach to get back going with the pace he had, on a damaged bike, showed a ton of heart. He was over two minutes behind the leader after the pit on the second lap and closed that down to almost fifty seconds at the white flag. That’s a heck of a ride. I know he wanted more, but we’re just glad he’s ok, and the effort was impressive.

“Like Zach, Jake also put in some serious effort to recover from a nasty first-lap crash. He was also so far behind over the first couple laps. But after he built into the race, Jake showed heart and courage to keep pushing forward. To be able to make those two passes on the last lap was really impressive. It’s a short turnaround heading into Glen Helen NGPC this weekend, but we’ll be ready to get back after it!”