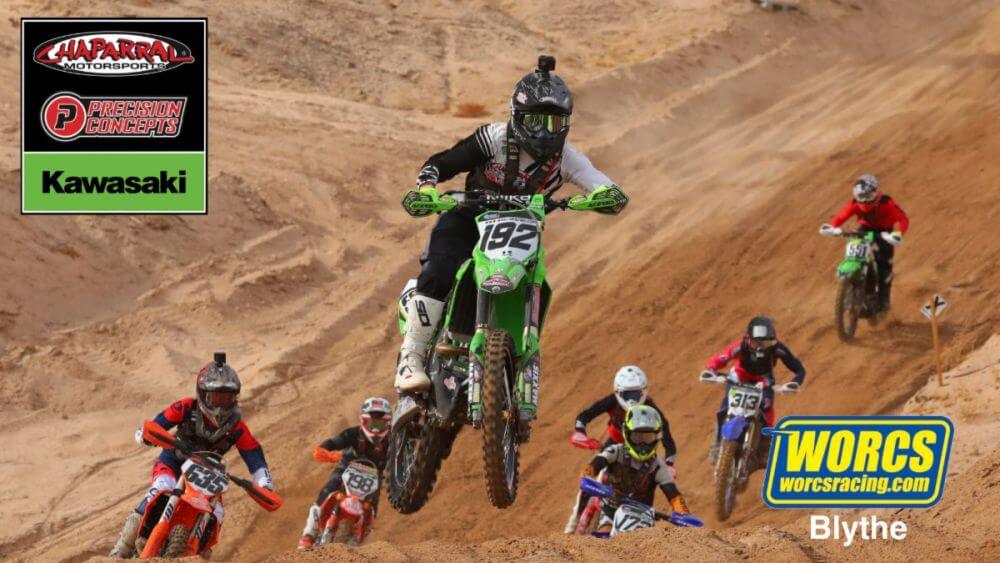 The team made the trek to Blythe, CA for the sixth and seventh rounds of the WORCS series. Just like the Glen Helen event, Blythe would host two full days of racing for all classes. This meant qualifying races for Clay Hengeveld and JP Alvarez Saturday and Sunday morning before the 75 min., plus-one-lap Pro main event each afternoon. The Blythe location was a new venue to all involved and seemed to get great reviews. Reminiscent of Lake Havasu, the race course in Blythe formed deep sand whoops and holes throughout. This made for very physically demanding conditions that definitely took its toll on the riders.

Zach was looking forward to getting more seat time in at Blythe under race conditions. Bell likes utilizing the races to build his strength and sharpness. So, though the double-round would be tough on his body, Zach was happy to test himself. He lined up far inside for Saturday’s main event on the line of Pro riders. As the green flag waved, Bell was pinched off slightly, but managed to salvage a top-three start. Through the first thirty minutes, he went back-and-forth with the Husky of Austin Walton, meanwhile keeping leaders Dante Oliveira and Taylor Robert within sight. As the raced neared an hour, the brutality of the course began to take its toll on his shoulder. Though Zach continued to circulate smooth laps, his paced understandably dropped. When the checkered flag came out, Bell crossed the line in fifth place.

For day-two, Zach knew the physical challenge was going to be tough. This was compounded when his bike was slow to fire for the dead-engine start. After getting off the line around tenth, Bell methodically made up a few positions on the first lap. He held a smooth, solid pace over the following thirty minutes. However, a couple falls halted any further progress through the pack. After around fifty minutes, Zach could tell he wasn’t doing his shoulder any favors. With the main goal being to build his body and race fitness, Bell made the call to rest up for the next weekend’s event. Zach would end up finishing tenth place.

As the Pro 2 line fired to life for the dead-engine start, Clay’s machine was slightly slow to ignite. As a result, Clay was right at the edge of the top-ten heading down the lengthy start-straight. After making a few quick moves, Hengeveld worked up to seventh by the end of the first lap. From there, Clay began building his pace over the next fifty minutes. He’d moved up to fifth place by the pit stop and looked solid in the rough conditions. With time winding down, Hengeveld closed in on the fourth-place rider—Colton Aeck. Unfortunately, he just ran out of time to make up another position and crossed the line in fifth. The joy of the result was short-lived, however, as Clay was later penalized by the WORCS staff for using a line deemed illegal. Though the official result was unfortunate, Clay’s effort was a solid platform on which to build for day two.

Unfortunately, Clay’s luck wouldn’t turn around for the second day of racing. After getting a jump on the Pro 2 line, Clay settled into third place early-on. Hengeveld continued to circulate at pace, but began feeling an issue with his rear brake crop up. After falling through the field while trying to come to grips with it, he ended up pitting to replace the whole brake system. While the system swap gave him his brake back, it also sent him down pretty far in the running order. After rejoining the race outside the top-ten, Hengeveld was able to push forward to make up a few positions. At the finish, Clay crossed in ninth.

After winning the 250 A qualifying race, Alvarez was fired up for the Pro 2 Lights main event. Though he was one of the only kick-start bikes, JP was able to grab the hole shot to lead the pack into the off-road. A couple mistakes on the first lap saw JP drop back to third, but he pushed hard to recover. Unfortunately, a rough, sweeping corner caught him out and he suffered a pretty hard fall right around the halfway point. Though he was slow to get up, Alvarez was able to remount his bike and get back on course. From there, JP was able to salvage a fifth place finish at the checkers.

Alvarez was pretty sore for the second day of racing. However, that didn’t end up being the main obstacle he had to overcome. In a freak occurrence, JP had a bee sting the palm of his throttle hand just an hour before the race. His palm, then, instantly swelled. After squeezing his hand into the glove, Alvarez pulled another hole shot to lead the pack over most of the first lap. Through the second lap, Alvarez continued to battle inside the top-three. However, the discomfort of the sting began to take its toll and his pace began to slow. Still, JP hung tough to finish in third place as the checkered flag flew.

“What a weekend! These double rounds have been great in order to get a full season in this year. But I’m definitely happy to have the last one behind us.

“Zach was able to get some more quality laps under his belt this weekend. His speed’s nearly there. So, when his shoulder is fully strong, he’ll be back to his best. It was good to see him play it smart and safe this weekend with the rough conditions, backing it down when he needed to in order to not risk the progress he’s made.

“Clay’s weekend was the toughest to come to grips with. On Saturday, he made some big strides in his riding. Late in the race, his pace was there and he was finally going to get that top-five finish. Unfortunately, we had to accept the WORCS ruling on a line choice in the off-road section. I’m still mixed on the penalty. I understand the WORCS point of view, but I totally back my rider on why we felt it wasn’t an illegal line. Anyway, we learned from it, so we’ll make better decisions moving forward.

“Then, on Sunday, Clay had an issue with the rear brake. It was something minor, that we haven’t experienced in eleven years. But hey, it’s 2020, so apparently if it can happen, it’s going to. It was good practice for Phil and the crew to change a rear brake system mid-race, if I’m looking at the brighter side.

“On to JP’s weekend and his obstacle on Sunday was maybe the wildest one. First, he showed great speed on Saturday, but had a few mistakes and one pretty violent crash, which held him back in the results. On Sunday, to have a bee sting his palm just an hour before the race is some kind of rotten luck. Then, his hand swelled up like a balloon. So, I was impressed he rode as well as he did. I’d say this weekend definitely highlighted his toughness.”

View more results from the weekend by clicking here to visit the WORCS scoring site.

BlueWater Desert ChallengeEnd of a Demanding, Yet, Successful 2020 Season Previous post
The 2020 Red Bull Romaniacs - one for the history books Next post